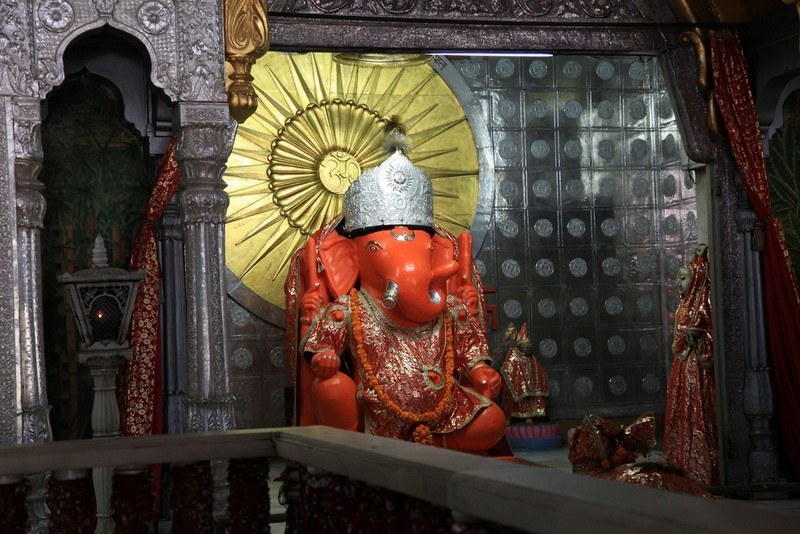 At a distance of 6 km from Jaipur Junction Railway Station, Moti Dungri Temple is a famous pilgrimage site in Jaipur situated close to the entrance of popular Birla Temple in the heart of Jaipur City. The temple is situated at the foothill of a beautiful hilltop palace, called the Moti Dungri Palace.

The Moti Dungri Ganesh Temple was constructed by Seth Jai Ram Paliwal in 1761. It is one of the most popular tourist destinations in Jaipur. According to the legend, King of Mewar was returning back to his palace from a long journey and was carrying a colossal Ganesh idol on a bullock cart. It is said that the king wanted to build a temple and had decided to consecrate the idol of Lord Ganesh wherever the bullock cart halted the first time. The bullock cart stopped at the foot of the Moti Dungri hills, where the present temple was built.

Dedicated to Lord Ganesh, the temple consists of three domes. The idol of Lord Ganesh is in a sitting posture and the trunk is towards the left, which is considered very auspicious. The idol is covered with vermillion (Sindoor). A massive idol of mushika, vehicle of Lord Ganesh is also placed in front of the Ganesh idol. The temple is carved out of stone and has some beautiful lattice work consisting of mythological images which are engraved on the marble.

The temple is nestled by the beautiful palace, called Moti Dungri palace, which is an imitation of a popular Scottish Castle. Earlier, the palace was home to Rani Gayatri Devi, but it is currently closed.

The festival of Ganesh Chaturthi, Janamastami, Annkuta and Paush Bada are the major festivals with devotees thronging the temple in huge numbers. People of Jaipur believe in extending the first invitation on every occasion to Lord Ganesh of this temple. Also, may newly married couples start the first day of married life with a visit to this temple.