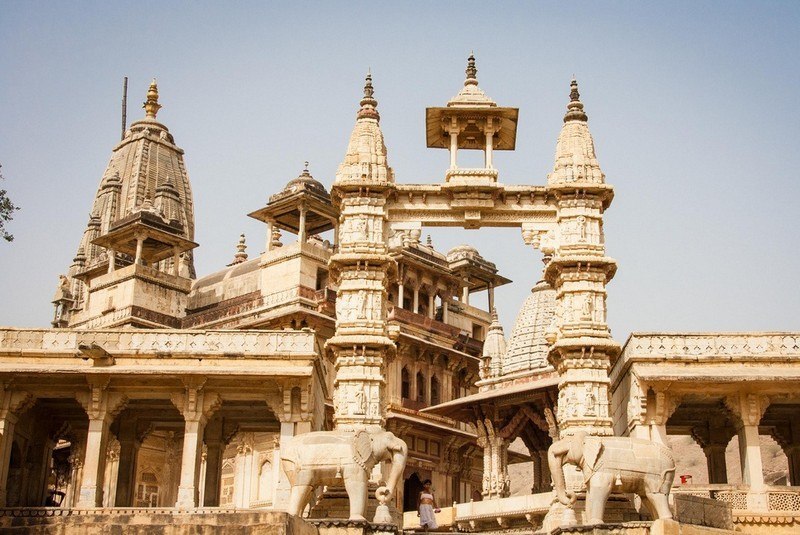 At a distance of 14 km from Jaipur Junction Railway Station and 500 m from Amer Fort, Srijagat Siromani Temple is one of the oldest temple of Amber town. This temple is dedicated to Meera Bai and Lord Krishna.

Meera Bai is the wife of Mewar king though in childhood she was a great devotee of Lord Krishna and considered him as her husband. This temple was built during1599 - 1608 AD by the queen Kanakwati, wife of king Man Singh I in the memory of her son Jagat Singh.

According to the history, the statue of Lord Krishna in this temple is same statue that Meera Bai used to worship in Mewar. This statue was saved from destruction by rulers of Amer during Mughal war with Mewar and brought safely to Amer.

The temple is a perfect example of Nagara style architecture. It consists of a Sanctum, Vestibule and Mandapa with projecting screen window on either side. The temple stands on a high ornate adhisthana. The three storeyed Garbha griha is crowned by Sikhara. The Mandapa is a two storied structure. An attractive mural in the ceiling of assembly hall represents the 17th Century art of Amber. The outer walls of Jagat Siromani temple are adorned with the sculptures of different gods and goddess.

At the entrance of the temple there is beautiful marble archway which is flanked by carvings of elephants. The archway was made from single piece of marble and it contains intricately carved images of various gods. This temple also has a white marble statue of Lord Vishnu.