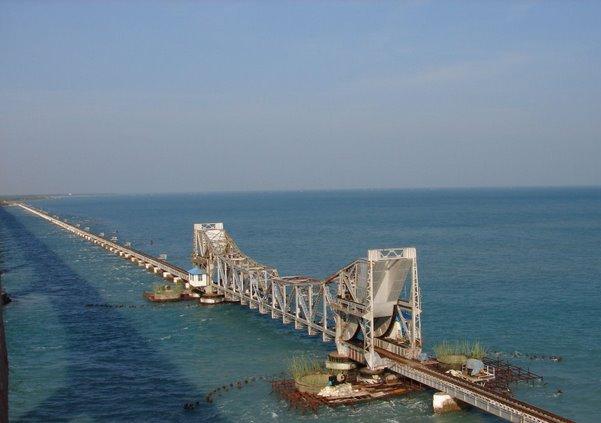 #3 of 12 Places to Visit in Rameshwaram

Place Location: On The Way To Rameswaram

At a distance of 12 km from Rameshwaram, Pamban Bridge is a railway bridge located near Rameshwaram. It is India's first sea bridge, and among the popular Rameshwaram tourist places.

Annai Indira Gandhi Bridge or Pamban Bridge connects the town of Mandapam in mainland India with Pamban Island, and Rameswaram. Opened for traffic in 1914, it is the longest sea bridge in India (2.2 km) until the opening of the Bandra-Worli Sea Link in 2010. The construction of this bridge has left many engineers wondering as it stands tall and strong even today. The ships too can pass under the bridge and hence it is most convenient means of commutation. It is one of the most visited places as part of Rameshwaram packages.

In 1988, a road bridge was also constructed parallel to the rail bridge. This road bridge is also known as Indira Gandhi Road Bridge. The Pamban Road Bridge connects the National Highway (NH 49) with the Rameswaram island. It stands on the Palk Strait and between the shores of Mandapam on the Indian mainland and Pamban on Rameswaram island). It was inaugurated by former Indian Prime Minister Rajiv Gandhi on 2 October 1988. This 2.345 km long Bridge took close to 14 years to be completed.