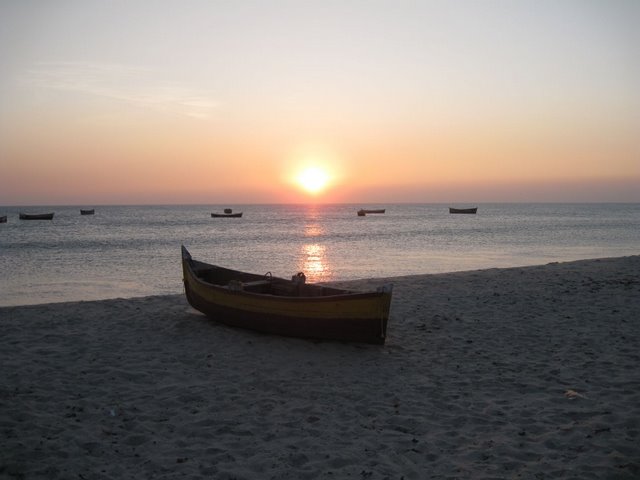 #7 of 12 Places to Visit in Rameshwaram

At a distance of 18 km from Rameshwaram, Dhanushkodi is an abandoned coastal town at the south-eastern tip of Pamban Island in Tamil Nadu, India. It is one of must include places in South India tour, and among the most famous Rameshwaram tourist places.

Dhanushkodi is on the tip of Pamban island, separated from the mainland by the Palk Strait. The town is named after Rama's bow. The boulders around the sea between Srilanka and this place known as Adam's bridge, are believed to be used by Hanuman to reach across Srilanka. It is one of the must-visit places as part of Rameshwaram tour.

Flanked by the Indian Ocean on one side and the Bay of Bengal on the other, Dhanushkodi was once a bustling and flourishing town, and one of the richest fishing belts in the country. Also, it was the only land border between Sri Lanka and India and served as a major port for several pilgrims and traders. The town was destroyed during the 1964 Rameswaram cyclone and remains uninhabited in the aftermath. Only a small number of fisher families live in Dhanushkodi. The town's remote location and tragic past lend it an eerie vibe, thus it is also often referred to as the 'ghost town'.

Visitors can see the ruins of a temple, railway station, a church, and homes of the then inhabitants. Besides, visitors can relax on the beach and listen to the sounds of the mighty waters of the Indian Ocean and the Bay of Bengal. Also, there are one or two small shacks and a tiny tea stall on the beach.

From Rameshwaram, you can drive or take a bus to Dhanushkodi until a certain point, i.e. Moonram Chathiram. From there, you need to board the tempo/tiny truck that will ferry you to Dhanushkodi - the journey itself is fascinating as you'll be traveling along a thin strip of land with sea on both sides. It is advisable to go during day time to the village and return before sunset as the entire 15 km stretch is said to be dangerous.