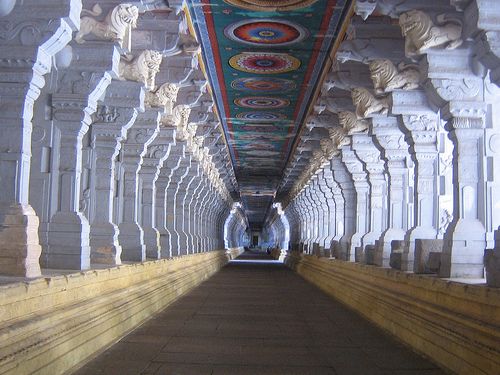 #1 of 12 Places to Visit in Rameshwaram

At a distance of 2 km from Rameshwaram Railway Station, the magnificent Ramanathaswamy Temple is a Hindu temple situated in the sacred town of Rameshwaram, Tamilnadu. Popularly called as Rameshwaram Temple, it is one of the popular places of pilgrimage in Tamilnadu, and among the must include places in Rameshwaram tour packages.

Rameshwaram Temple is dedicated to Lord Siva and is one of the 12 Jyotirlingas situated in different parts of India. It is among the prime places to visit in Rameshwaram. The temple is one of the holiest Hindu Char Dham sites comprising Badrinath, Puri, Dwarka, and Rameshwaram.

The construction was led by several rulers over the centuries. The temple was expanded during the 12th century by the Pandya dynasty, and its principal shrine was renovated by Jeyaveera Cinkaiariyan and his successor Gunaveera Cinkaiariyan of the Jaffna kingdom. The temple has the longest corridor among all Hindu temples in India.

The lingam in the Rameshwaram Temple was installed by Lord Rama. As per the legend, Lord Rama killed Ravana, a Brahmin to save his wife, Sita. He wanted to absolve the sin of killing a Brahmin. Therefore, on the advice of sages, Lord Rama with his wife and brother, Lord Lakshmana installed and worshipped a lingam here. He wanted to worship the largest lingam and so, he asked Hanuman to bring it from the Himalayas. When Hanuman was delayed in bringing the lingam, Rama built a small lingam out of the sand available in the seashore, which is believed to be the lingam in the sanctum. Hanuman was disappointed since Rama did not worship the lingam brought by him. So, Lord Rama placed his lingam next to Ramalinga and named it Shivalingam.

The temple is the epitome of flawless Dravidian architecture. Ramanathaswamy Temple also has its name in history books as it houses the largest hallway in India. The hallway is approximately 1220 m in length with brilliantly carved pillars throughout the hall. The 54 m tall Gopuram has become the symbol of divinity in the heart of many pilgrims. Another famous feature of Ramanathaswamy Temple is the 22 wells spread throughout the premises. It is said that water from each well tastes different and has curative features.

The temple is located in Rameswaram considered a holy pilgrimage site for Shaivites, Vaishnavites, and Smarthas. The Maha Shivaratri is the major festival that is celebrated with gusto and fervour at Ramanathaswamy Temple. It is a 10-day festival and takes place in February-March. Vasanthautsavam, Ramalinga Prathista Utsavam, Thirukkalyanam, Navratri, and Arudhra Darshanam are the other festivals celebrated here with great enthusiasm.