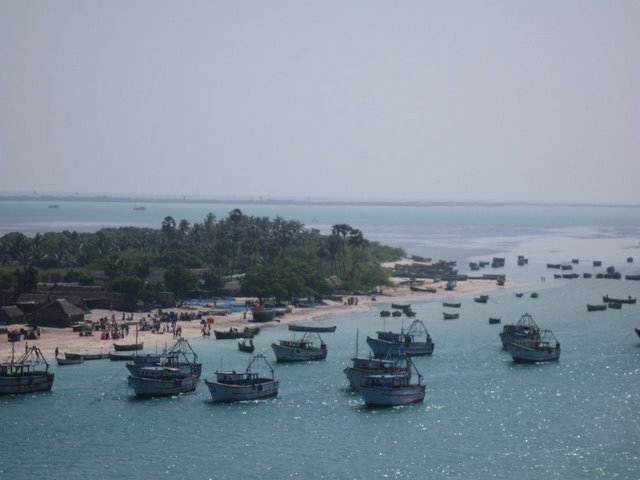 At a distance of 171 km from Madurai, 230 km from Trichy, 227 km from Tirunelveli, 311 km Kanyakumari, 387 km from Pondicherry, 371 km from Trivandrum, 562 km from Chennai, and 607 km from Bangalore, Rameshwaram is a religious town situated in Ramanathapuram district of Tamil Nadu. It is one of the most famous places of pilgrimage in India, and among the best places to visit in Tamilnadu.

Rameshwaram Temple is one of the most famous Shiva shrines in India and is one of the top attractions you must include in Rameshwaram tour packages. It is significant for Hindus as a pilgrimage to Banaras is incomplete without a Pilgrimage to Rameswaram. According to the legend, Rameswaram is the place from where Lord Rama, built a bridge across the sea to rescue his consort Sita from Ravana. This is also the place where Rama worshipped Lord Shiva to cleanse away the sin of killing Ravana. Both the Vaishnavites and Shaivites visit this pilgrimage which is known as the Varanasi of South. Rameswaram along with Dwarka, Puri and Badrinath form the four Char Dhams.

Rameshwaram is one of the popular pilgrimage places to visit near Madurai. There are about 64 thirthas situated in Rameshwaram, of which, 24 are considered as important. Bathing in these Tirthas is a major aspect of the pilgrimage to Rameswaram and is considered equivalent to penance. Twenty-two of the Tirthas are within the Ramanathaswami Temple. Ramanathapuram, Tirupullani, Uthirakosamangai, Sethu are the nearby attractions to Island of Rameshwaram. Beautiful beaches at Olaikuda, Danushkodi and Pamban are other attractions apart from the religious point of view. Scuba diving and Migratory birds watching during winter are the activities here.

How to Reach Rameshwaram - Full Details

Top 10 Places to Visit in Rameshwaram

#1 of 12 Places to Visit in Rameshwaram

At a distance of 2 km from Rameshwaram Railway Station, the magnificent Ramanathaswamy Temple is a Hindu temple situated in the sacred town of Rameshwaram, Tamilnadu. Popularly called as Rameshwaram Temple, it is one of the popular places of pilgrimage in Tamilnadu, and among the must include places in Rameshwaram tour packages.

Rameshwaram Temple is dedicated to Lord Siva and is one of the 12 Jyotirlingas situated in different parts of India. It is among the prime places to visit in Rameshwaram. The temple is one of the holiest Hindu Char Dham sites comprising Badrinath, Puri, Dwarka, and Rameshwaram.

The construction was led by several rulers over the centuries. The temple was expanded during the 12th century by the Pandya dynasty, and its principal shrine was renovated by Jeyaveera .....

#2 of 12 Places to Visit in Rameshwaram

At a distance of 2 km from Rameshwaram Railway Station (just 100 meters away from east entrance of Rameshwaram Temple), Agnitheertham is said to be the place where Rama worshipped Lord Shiva to wash off his sins of killing Ravana. It is one of the prime place to visit on a Rameshwaram trip.

It is a sacred place and piligrims believe that taking a bath in Bay of Bengal at Agniteertham will washout one's sins of life time. It is visited by the followers of Lord Shiva as well as Vishnu, whose incarnation was lord Rama.

The sea here is very calm and ideal for bathing.

#3 of 12 Places to Visit in Rameshwaram

At a distance of 12 km from Rameshwaram, Pamban Bridge is a railway bridge located near Rameshwaram. It is India's first sea bridge, and among the popular Rameshwaram tourist places.

Annai Indira Gandhi Bridge or Pamban Bridge connects the town of Mandapam in mainland India with Pamban Island, and Rameswaram. Opened for traffic in 1914, it is the longest sea bridge in India (2.2 km) until the opening of the Bandra-Worli Sea Link in 2010. The construction of this bridge has left many engineers wondering as it stands tall and strong even today. The ships too can pass under the bridge and hence it is most convenient means of commutation. It is one of the most visited places as part of Rameshwaram packages.

In 1988, a road bridge was also constructed parallel to the rail bridge. This road bridge is also known as Indira Gandhi Road Bridge. The .....

#4 of 12 Places to Visit in Rameshwaram

Devipatnam, along with Rameshwaram and Thiruppullani are associated with the Hindu sacred epic Ramayana. Also known as Navapashanam, this holy town is famous for the Navagraha Temple. According to the legend, Lord Rama when going to war to kill Ravana had worshipped navagrahas by installing nine different stones, each symbolizing the nine celestial bodies to calmed the sea. It is said that since then, 9 navagraha stones are located in the sea, at a distance of about 100 meters from the seashore. These can be seen in the morning when the level of seawater is low; however in the evenings when the tides are high, most of the navagraha stones are submerged in the water.

#5 of 12 Places to Visit in Rameshwaram

At a distance of 3 Kms from Rameshwaram Railway Station (around two kilometer from Ramanathaswamy Temple / Rameshwaram Temple), Five faced Hanuman Temple has mythological evidence where Hanuman showed his profile with five faces.

The idols of Lord Ram, Sita and Hanuman, which are brought from Dhanushkodi during the cyclone of 1964, are kept here. The 'floating stones', which were used to build the Sethu Bandhanam (bridge) in Ramayana, are also kept in the temple.

There is floating stone outside the temple which was used to create the bridge on the sea as prescribed by our Indian mythology.

#6 of 12 Places to Visit in Rameshwaram

At a distance of 3 km from Rameshwaram Railway Station, Gandhamathana Parvatham is the highest point in the island.

There is a two storeyed Mandapam, where Rama's feet (padam) is found as an imprint on a chakra. Pilgrims visit in thousands to worship Gandhamathana Parvatham. Sukreevar Temple and Theertham are situated on the way to Gandhamadana Parvatham.

#7 of 12 Places to Visit in Rameshwaram

At a distance of 18 km from Rameshwaram, Dhanushkodi is an abandoned coastal town at the south-eastern tip of Pamban Island in Tamil Nadu, India. It is one of must include places in South India tour, and among the most famous Rameshwaram tourist places.

Dhanushkodi is on the tip of Pamban island, separated from the mainland by the Palk Strait. The town is named after Rama's bow. The boulders around the sea between Srilanka and this place known as Adam's bridge, are believed to be used by Hanuman to reach across Srilanka. It is one of the must-visit places as part of Rameshwaram tour.

Flanked by the Indian Ocean on one side and the Bay of Bengal on the other, Dhanushkodi was once a bustling and flourishing town, and one of the richest fishing belts in the country. Also, it was the only .....

#8 of 12 Places to Visit in Rameshwaram

At a distance of 20 km from Rameshwaram (about 4 km from Mandapam), Kurusadai Island is an uninhabited Island lies to the west of the Pamban Bridge between the mainland and Pamban Island. About 10,500 sq. kms of the sea around here constitute a Marine Biosphere, a paradise for Marine Biologists and nature lovers.

There are plenty of coral-reefs and fishes. You can also see dolphins and sea-cows (Dugong). A special permission from the Director of Fisheries, Chennai is required to visit this Island.

#9 of 12 Places to Visit in Rameshwaram

The main tourist attraction in Ramanathapuram is the Raja Palace. This Palace was built by the Sethupatys and continues to be inhabited by the descendants of the royal family, although they are no longer in power. The royal family has set up schools and hospitals in the area as part of their community service. The Ramalinga Vilasam Palace with a good collection of paintings, and the tomb of Thayumana Swamigal, a philosopher-saint, are worth visiting.

Ramanathapuram finds a mention in Hindu mythology as well. It is believed that Lord Rama after defeating Ravana, returned to nearby Rameswaram. He .....

#10 of 12 Places to Visit in Rameshwaram

At a distance of 15 km from Ramanathapuram, and 66 km from Rameshwaram, Thirupullani is a temple town situated near Rameshwaram. It is one of the prominent places of pilgrimage in Tamilnadu, and among the must-visit places during your Rameshwaram Trip.

The town is known for Aadi Jagannatha Perumal Temple dedicated to Lord Vishnu. Popularly known as Thirupullani Temple, it is one of the 108 Divya Desam temples of Lord Vishnu. It is also known as Dharbasayanam as Rama took rest on a couch of grass at this place. Other names of this place are Thiruvadanai, Pularanyam, Adhisethu and Ratnaharam.

This ancient temple not only attracts visitors because of its sacredness but also for its historical background and architectural excellence. Built during the reign of Cholas, various contributions were made to this temple during Pandyan rule and the rule of Sethupathy Kings. It is now maintained by the Hindu Religious and Endowment .....