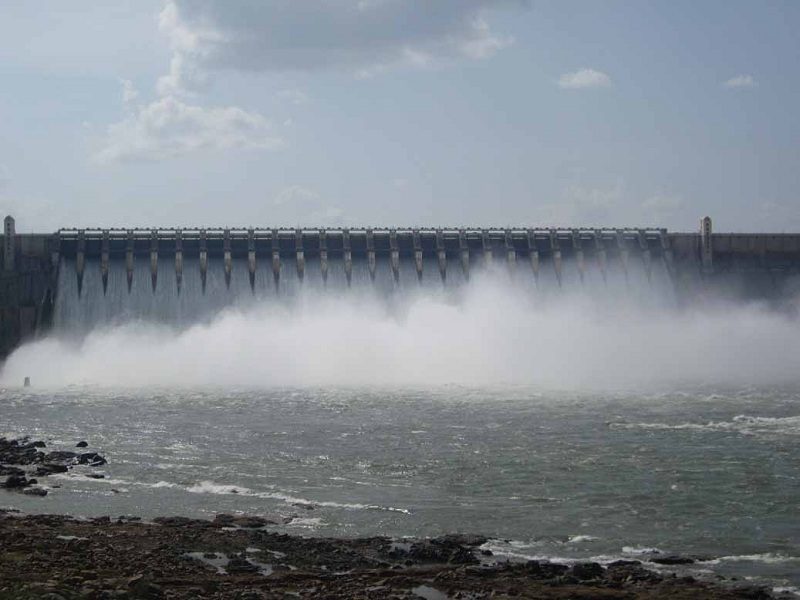 Known in ancient days as Vijayapuri, meaning 'The city of victory', Nagarjuna Sagar takes its present name from Nagarjuna, one of the most revered Buddhist monks lived in 2nd century AD. It is also a place of immense archaeological significance & excavations revealed this place as a center for the propagation of Buddhist teachings in South India during 3rd century AD. It was ruled by the Sathavahanas and subsequently by the Ikshvaku rulers during ancient times.

One of the early river valley civilizations took birth here. Enthused by the peaceful environs of this place, Buddhists made this land a great hub of learning, setting up one of the four major Viharas here. Further down in history, one of the first Hindu kingdoms of South India, Ikshvakus made this city their capital. Today known as Nagarjuna Sagar, this holy land now boasts one of the world's tallest dams.

Nagarjuna Sagar Dam, Nagarjuna Sagar Wildlife Sanctuary, Nagarjuna Konda Museum, Ethipothala Waterfall are the famous attractions of this place. Nagarjuna Sagar Dam, built on River Krishna between the states of Telangana and Andhra Pradesh was completed in 1966. It has a height of 124 m and a length of over 1450 m with 26 crest gates. The lake created by the dam is the third largest manmade lake in the world. There is a viewpoint at a distance of 4 km from the dam that offers a panoramic view of the amazing landscape. The dam serves the irrigation needs of the region and is also a source of hydro-electricity. Nagarjuna Konda, where the ancient Buddhist excavations are found is in middle of the waters of Nagarjuna Sagar and can be reached by a boat. Steam boat rides are available to the dam where the turbines can be seen in action.

Hyderabad airport is the nearest airport, about 153 km away. The nearest railway stations are at Macherla (23 km) and Nalgonda (83 km). Macherla has trains from Guntur, Nadikudi, Vijayawada and Bhimavaram while Nalgonda lies on Secunderabad-Guntur line and connected with Chennai, Vizag, Tirupati, Vijayawada, Kochi, Coimbatore, etc. Regular buses connect Nagarjuna Sagar with cities like Hyderabad, Warangal, Guntur and Vijayawada.

Start the trip early in the morning from Hyderabad in order to come back by same night.

#1 of 8 Places to Visit in Nagarjuna Sagar

At a distance of 3 km from Nagarjuna Sagar Bus Station, Nagarjuna Sagar Dam is built on River Krishna between the states of Telangana and Andhra Pradesh. It is one of the main places to visit in Nagarjuna Sagar. The dam offers breathtaking views when the gates are open in peak monsoon season (around Sep). This is another popular attraction not to miss in a Hyderabad tour packages.

The Dam was completed in 1966 and it has a height of 124 m and a length of over 1450 m with 26 crest gates. The lake created by the dam is the third largest manmade lake in the world. The dam can store up to 11, 472 million cubic meters of water in the reservoir. There is a viewpoint at a distance of 4 km from the dam that offers a panoramic view of the amazing landscape. It is one of the earliest irrigation and hydro-electric projects in India. The dam .....

#2 of 8 Places to Visit in Nagarjuna Sagar

At a distance of 23 km from Nagarjuna Sagar Bus Station & 14 km from Boat Launch Station, Nagarjuna Konda is a small island in Nagarjuna Sagar Lake which houses the excavated remains of the Buddhist civilization of 2nd century. This is one of the major historical sites to visit around Hyderabad and among the top Nagarjuna Sagar places to visit.

It is one of India's richest Buddhist sites and now it lies in the backwaters of Nagarjuna Sagar Dam. Nagarjuna Konda was once the capital of Ikshvaku Kingdom and was called Vijayapuri. It was named after Acharya Nagarjuna, a renowned Buddhist scholar, philosopher who lived here in the 2nd century AD and composed the initial sutras of Mahayana Buddhism. The revered Buddhist monk was heading the community of Buddhist priests for nearly 60 years in the 2nd century. He found the Madhyamika School which studied and developed the teaching .....

#3 of 8 Places to Visit in Nagarjuna Sagar

Ethipothala is a famous waterfall formed by the mountain streams which falls from a height of approximately 70 feet into a lagoon. Three streams namely Nakka Vagu, Tummala Vagu and Chandravanka Vagu combine to form this waterfall. The name Ethipothala has been derived from the Sanskrit word 'Etitaposthal' meaning the place for penance. It is believed that saints have performed rigorous penance .....

#4 of 8 Places to Visit in Nagarjuna Sagar

At a distance of 17 km from Nagarjuna Sagar Bus Station & 8 km from Boat Launch Station, Anupu is a site of Buddhist excavations reconstructed to perfection with extreme care and great effort. During the construction of the Nagarjuna Sagar Dam, the ruins of an ancient Buddhist university were excavated along with several monasteries. These ruins are collected and few structures are reconstructed at 80 hectare Anupu by Archeological Survey of India. It is one of the best Nagarjuna Sagar tourist places.

There are three main structures at Anupu - Ancient University, Amphi Theater and Harati Temple. The reconstructed stupas at University have circular brick or rubble walls, which have cladding of limestone slabs or plaster. The Simhala Vihara has two halls, one encircling a Buddha image. The Chaitya Halls and monasteries had limestone column set in to brick and stone walls.

The Amphi Theatre is a magnificent structure with stepped columns on both sides and a big play ground in .....

#5 of 8 Places to Visit in Nagarjuna Sagar

At a distance of 55 Kms from Nagarjuna Sagar (on SH1 after Macherla), Laxmi Chennakesava Swamy Temple is a famous 13th century temple dedicate to Sri Venkateswaram (an incarnation of Lord Vishnu) located in Karampudi village of Guntur district.

This historical temple was built by king Brahmanayudu of Palnadu. The main gopuram is 60 feet tall with several carvings.

Weapons used during the Palnadu war are carefully preserved here. An annual festival to commemorate the memories of the heroes of that war attracts visitors from all over the region.

#6 of 8 Places to Visit in Nagarjuna Sagar

At a distance of 33 km from Guntur, 38 km from Vijayawada, 111 km from Machilipatnam, 162 km from Khammam, 178 km from Nalgonda, 178 km from Bhadrachalam, 194 km from Rajahmundry, 270 km from Nellore, 274 km from Hyderabad, 403 km from Vishakhapatnam, 450 km from Anantapur, Amaravati is a popular historical town situated on the southern bank of Krishna River in Guntur district of Andhra Pradesh. It is the new capital of Andhra Pradesh state and one of the popular pilgrimage sites for Hindus as well as Buddhists.

The town gets its name from Amareshwara or Amaravati temple, dedicated to Lord Shiva. The town has been mentioned in the Indian epics as Dhanyakataka and Andhranagari. It was also served as the capital of the Satavahanas, who ruled Andhra Pradesh from the 2nd century BCE to the 3rd century CE. Later it was ruled by several major dynasties like Andhra Ikshvakus, the Pallavas, the Cholas, the Kakatiyas, the Delhi Sultanate, Musunuri Nayaks, Bahmani Sultanate, Vijayanagara Empire, .....

#7 of 8 Places to Visit in Nagarjuna Sagar

The Forest department organized a Jeep Safari in the forest (to Farahabad Viewpoint) from the entry point on Hyderabad to .....

#8 of 8 Places to Visit in Nagarjuna Sagar

Srisailam is famous for Srisailam Dam & Bhramaramba Mallikarjuna Temple which is dedicated to Lord Shiva. The sanctum enshrines Lord Mallikarjuna in the form of a linga protected by a three-hooded cobra. This ancient temple built in the Dravidian style with lofty towers and sprawling courtyards is one of the finest specimens of Vijayanagara architecture. Though the exact origins .....