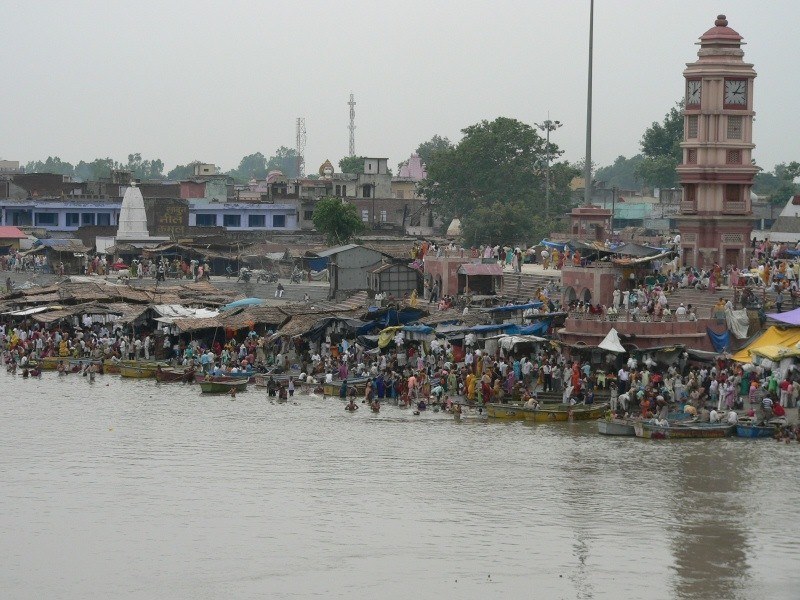 #4 of 5 Places to Visit in Bulandshahr

At a distance of 68 km from Ghaziabad, 52 km from Bulandshahr, 44 km from Meerut & 93 km from New Delhi, Garhmukteshwar is a holy town in Hapur district of Uttar Pradesh. It is situated on the banks of holy Ganges River and is a well known tourist place near Delhi, Noida & Gurgaon..

Garhmukteswar is mentioned in Bhagvat Purana and the Mahabharata. It is believed that Garhmukteswar was a part of ancient city Hastinapur, the capital of Kauravas. There is an ancient fort which was believed to have been constructed by the Pandavas It was later renovated by a Maratha General Mir Bhawan during Anglo Maratha War. Not much remains of that Fort now and one can only trace some ruins.

The name Garhmukteswar is derived from the great temple of Mukteshwar Mahadeva, dedicated to Lord Shiva and goddess Ganga. This temple is one of the most known and ancient temples located in Garhmukteshwar and said to have been built by King Shivi. There is a huge Shiva Linga installed inside this temple which is said have been installed by Sage Parasurama. The temple receives thousands of devotees during Shivrathri who throng to the temple to have darshan of Lord Shiva.

There is also a Ganga Temple which is one of the famous tourist spots of this city. Lakhs of devotees come here to have a holy dip in the river Ganga at the time of Maha Kumbh Mela, which comes once in 12 years. The place is also famous for its 80 Sati Pillars which is a mark where Hindu widows used to have committed sati. The town also has a mosque, built by Ghiyas-uddin Balban that bears an inscription in Arabic dating to 1283 AD. One can also visit the Meerabai Ki Reti which is located near Mukteshwar temple. This is a long stretch of golden sands.

Garhmukteshwar is also famous for its Ganga Fair which is held every year on Full Moon Day in the month of Kartik. Large number devotees visit this place to have a dip in the river Ganges.