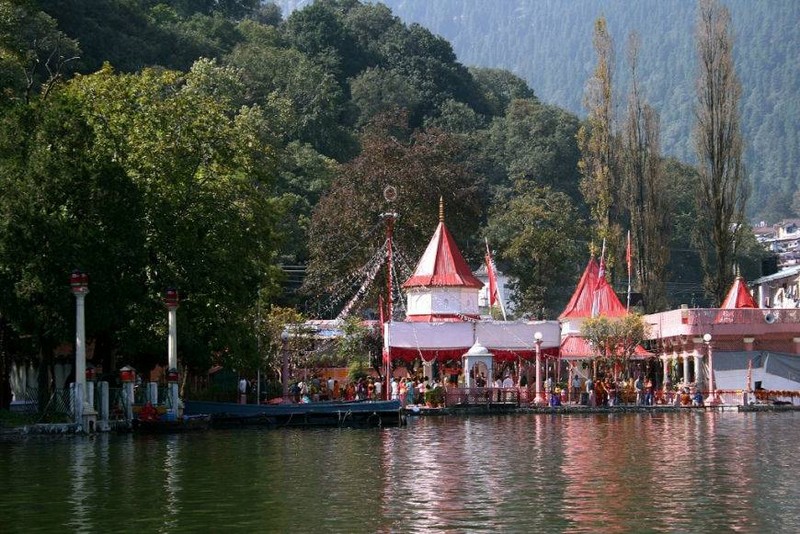 At a distance of 2 km from Tallital Bus Stand, the Naina Devi Temple is a Hindu temple situated on the northern end of the Nainital Lake near the Nainital Boat House Club. It is one of the top places of pilgrimage in the Kumaon region of Uttarakhand, and among the must-visit places during Nainital Tour.

The presiding deity of the temple is Goddess Naina Devi represented by two eyes. According to the legend, Naina Devi Temple is the place where eyes from burned body of Goddess Sati fall when her corpse was being carried by Lord Shiva. The word Naina is synonymous with Sati's eyes. The temple is one the main Nainital places to visit.

It is said that the current temple at Nainital actually replaces the original 15th-century temple. In 1842, a devotee Moti Ram Shah installed an idol of Naina Devi. A major landslide has destroyed the temple completely in 1880. Naina Devi temple was replaced by the present structure in 1883.

Inside the temple, devotees have a darshan of three deities. On the extreme left is Mata Kali Devi, the center representing two eyes of Naina Devi, and to the right side is the idol of Lord Ganesh. After crossing the main gate, there is a big Peepal tree on the left side. On the right side of the temple, there is an idol of Lord Hanuman. The main shrine of Naina Devi is bordered by two lion statues.

During Nanda Ashtami, a big fair is organized in the Naina Devi temple and devotees come for darshan and take blessings. This Nanda Ashtami festival runs for 8 days on the premises of Naina Devi temple. A ceremony of statue immersion of Goddess Nanda Devi with her sister Naini Devi is celebrated on the last day of the fair. Other holy occasions like Navaratri, Chaitra Fair, etc. also witness a huge number of devotees in the temple.