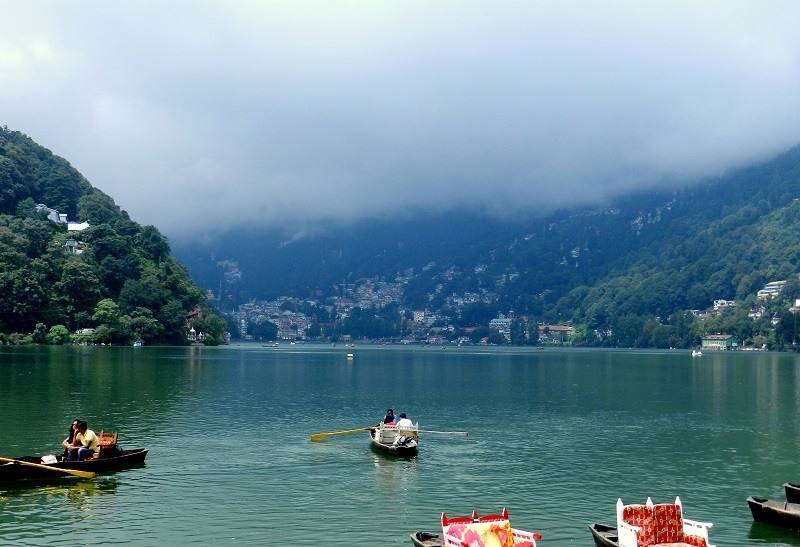 At a distance of 1.5 km from Tallital Bus Stand, Nainital Lake is a natural freshwater lake, situated amidst the main town of Nainital. It is one of the prime Nainital tourist places.

Nainital Lake is commonly represented to promote Nainital Tourism. The lake was built in 1839 by P. Barron. Situated at an altitude of 2,000 m, this is one of the four lakes of Kumaon hills, the other three lakes are Sattal Lake, Bhimtal Lake, and Naukuchiyatal Lake. Nainital Lake is lunar-shaped and has an outlet at the southeastern end. The lake covers a perimeter of 2 miles with a depth that varies from 6 m to 28 m. The northern part of the lake is called Mallital while the southern part is known as Tallital. Balia Nala is the main feeder stream of the lake. Other than this, 26 major drains, including the three perennial ones, feed it. It is surrounded by panoramic hills on three sides.

According to a legend, three sages Atri, Pulastiya, and Pulha had come here for pilgrimage; they felt thirsty and could not find any water. They dug a deep hole where the present lake stands and filled with water brought from Mansarovar Lake in Tibet. This lake is also mentioned in Skand Purana as Trishul Sarover.

This captivating lake is one of the must-visit places as part of Nainital packages. The Nainital Boat Club provides boating and yachting facilities. The Annual Kingfisher Yachting Competition (Regatta) is held here in the third week of June. Both the pedal and rowing boats are available for tourists.