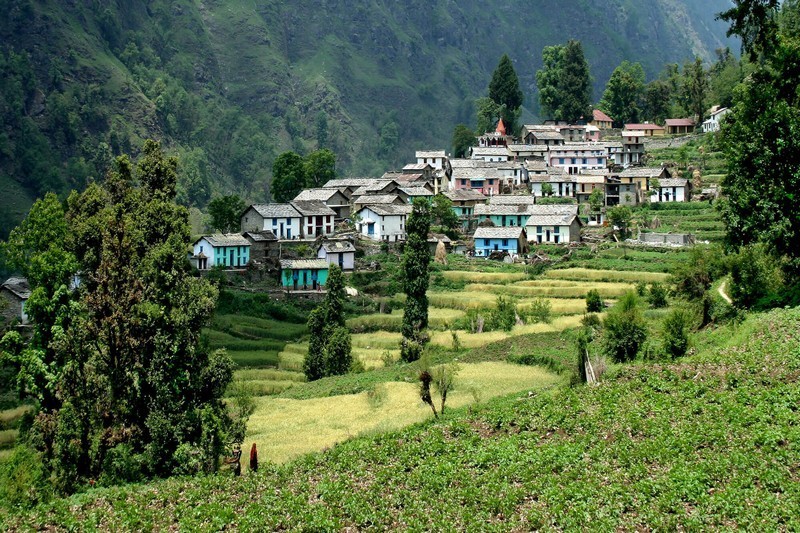 Best Time to Visit Ranikhet: March to May & December to February

At a distance of 50 km from Almora, 56 km from Nainital, 82 km from Haldwani, 325 km from Dehradun, and 350 km from Delhi, Ranikhet is a picturesque hill station and a cantonment town in the Almora district of Uttarakhand. Surrounded by Himalayan mountain ranges, Ranikhet is situated in the upper Kumaon Hills at an altitude of about 1869 m. It is one of the famous Tourist places in Uttarakhand and also among popular hill resorts near Delhi to visit as weekend getaway.

The word Ranikhet stands for Queen's Meadow. As per the folklore, Queen Padmini of Kumaon was so impressed with the natural beauty of this tiny hill paradise and decided to stay here. Later King Sukherdev built a palace for her at this place and named it Ranikhet. Ranikhet is among the prime place to visit on a Nainital tour.

There are a number of accommodation options in Ranikhet including heritage hotels, resorts, cottages as well as budget hotels to choose from. Ranikhet has a cool climate throughout the year. The best time to visit Ranikhet is from April to June and September to November.

How to Reach Ranikhet - Full Details

Top 10 Places to Visit in Ranikhet

At a distance of 8 km from Ranikhet Bus Stand, Chaubatia Gardens is famous for its fruit gardens run by the Government Fruit Research Centre and is one of the most attractive locations of Ranikhet.

The name Chaubatia literally means the junction of 4 paths, inter-linking the cities of Ranikhet, Bhargaon, Pilkholi and Dehrti. During 1868, Lord Mayo, who was the British Viceroy then, liked this place and wanted the British cantonment to be set up here.

The Chaubatia Gardens are perched at an altitude of 1800 m and sprawls over 600 acres of land. It boasts of more than 200 exotic varieties of fruits and flowers. This place is renowned for the orchards of delicious apples, peaches, plums and apricots. A research laboratory is also situated within its premises.

Chaubatia with its serene environment and natural beauty is an excellent place for a picnic with the family. Along with this, the surroundings of this place provides panoramic views of the snow clad mountain peaks .....

At a distance of 5 km from Ranikhet Bus Stand, the Jhula Devi Temple or Jhoola Devi Temple is an ancient temple built in the 8th century, situated near Chaubatia Gardens in Almora district of Uttarakhand. The present temple was constructed in 1935.

The temple was built on the same spot from where the idol was obtained. Since then pilgrims come to make a wish to Goddess Jhula Devi and when their wish is fulfilled they come again to thank Jhula Devi Maa by offering a bell to the temple. The temple houses a cluster of holy bells tied to its walls that .....

At a distance of 500 m from Ranikhet Bus Stand, Mankameshwar Temple is a Hindu shrine situated next to Narsingh Maidan in Ranikhet town of Uttarakhand.

The Mankameshwar Temple was built in 1978 by the Kumaon Regimental Centre of the Indian army. This temple is dedicated to three main deities namely Goddess Kalika, Lord Shiva and the pair of Radha-Krishna. Mankameshwar Temple is surrounded by eternal beauty and hence it is one of the most picturesque spots in Ranikhet.

Mankameshwar temple is a popular temple for locals and remains busy with devotees throughout the year. People, especially the family members of military units in the Kumaon regiment frequently visit to worship in this shrine. The temple is particularly popular during the months of Sawan; unmarried girls keep fasts during this time and pray for a happy married life. The tourists can also visit the Gurudwara and a woolen garment factory, which is located near the temple.

At a distance of 18 km from Ranikhet, Binsar Mahadev Mandir is an ancient Hindu temple situated at Bisaona near Ranikhet in Uttarakhand. The temple is surrounded by thick deodar forests and lies at an altitude of 2480 m. This is among the most visited temples in Uttarakhand.

The Binsar Mahadev Temple is dedicated to Lord Shiva worshipped here as Bindeshwar. The temple was built in 10th century by King Pithu in memory of his father Bindu, hence this temple is also known as Bindeshwar temple. The temple also houses the idols of Lord Ganesha, Goddess Gauri and Goddess Mahisasuramardini. The idol of Mahisasuramardini is engraved with texts in Nagarilipi which dates back to as early as the 9th century.

The temple is known for its fine architecture. It is believed that Binsar Mahadev temple was built in a single day. The surroundings of the temple offer beautiful views of fresh water springs and cedar forests. It is a unique place for meditation and picnic. The temple also has an .....

At a distance of 34 km from Ranikhet & 77 km from Almora, Dwarahat is an ancient town situated in Almora district of Uttarakhand. It is famous for its ancient temples which were constructed mainly by the Katyuri kings and are maintained by ASI.

Dwarahat, which means Way to Heaven, was once the principal seat of the Katyuri kings whose empire was stretched from the Sutlez River in the west to river Gandak in the east, and from the Himalayas to the plains, including the whole of Rohelkhand. Later it came under the rule of the Chand Rajas of Kumaon in the sixteenth century.

Dwarahat has 55 ancient temples of exquisite architectural excellence, divided into 8 groups. Some temples now have great archaeological value. These were constructed in the Indo-Aryan, Maru-Pratihara or Nagara type. The temples are constructed mainly of masonry blocks of Pre-Cambrian granite available in the nearby area. Instead of mortar, iron clamps and dowels have been used to tie adjoining blocks.

At a distance of 4.5 km from Ranikhet Bus Stand, The Haidakhan Temple is situated in Haidakhan Baba Ashram at Chiliyanuala near Ranikhet. This temple is made by Haidakhan who is believed to be the incarnation of Lord Shiva to whom this temple is dedicated and is one of the best places in Ranikhet to visit. This temple proudly displays a tall statue of Lord Hanuman and Lord Shiva.

Haidakhan Babaji, simply called Babaji or Bhole Baba, was a teacher who appeared near the village of Haidakhan in Nainital district and taught publicly from 1970 to 1984. His followers maintain that Haidakhan Babaji is a Mahavatar, a human manifestation of God. He left his mortal remains in 1984, at an early age.

Sri Haidakhan Wale Baba established this beautiful Ashram between 1970 and 1984 and many new buildings were erected in recent years. There are also 5 guest houses, the main temple, the Italian temple and Sri Babaji's Kutir and the Sri Baba Research Hospital.

At a distance of 6 km from Ranikhet Bus Stand, Upat Golf Course is one of the highest golf courses of Asia, located at Upat village near Ranikhet.

This Golf Course is a 9-hole course making it one of the prime attractions of Ranikhet and is maintained by Kumaon Regiment. The green meadow of the golf course at such high altitude is awe-inspiring. This place is famous for providing panoramic views of surrounding snowcapped Himalayan peak. The area is surrounded by lush green forests densely populated with pine and oak trees.

Though primarily used by the army men, golf course is open to general public as well for a nominal fee. The golf club provides membership plans for outsiders as well. Few domestic tournaments are held at this course.

At a distance of 11 km from Ranikhet and 3 km from Chaubatia, the Bhalu Dam is a small artificial lake adorned in the preserved forest area near Chaubatia Orchard.

Bhalu Dam is a semicircular masonry dam and constructed in 1903 by a British Viceroy as a source of drinking water for the soldiers. There is a small 70 m long, 6.6 m wide and 9 m deep reservoir.

The surrounding areas of this pristine lake offer mesmerizing views of the Himalayan peaks. The small but beautiful garden nearby the dam is a wonderful site. The cool breeze and snowcapped valleys makes the dam area a perfect holidaying spot for the nature loving tourists. It is also a popular spot for camping and picnicking.

The dam is about 3 km trek from Chaubatia Orchard. The road to Bhulu Dam is in pretty bad shape and the directions are poor. The dam site is open to tourists throughout the year.

At a distance of 1.5 km from Ranikhet Bus Stand, the Kumaon Regimental Centre Museum and Memorial is situated near Somnath Ground. The Memorial was built in 1974, as a symbol of bravery and sacrifice made by soldiers of the place. The young soldiers take the pledge of loyalty to their motherland at this memorial. To commemorate the sacrifice of soldiers, a parade is also held here every year.

Apart from the memorial, this center also comprises a museum which was built in the year 1978. This Regiment Museum showcases the history of Kumaon and Garhwal regiments. It displays admired treasures like Rani Jhansi's argent scepter, Chinese rifles from the 1962 war, a World War-II Japanese wireless acreage blast and abstracts accompanying to the Kargil War. The Kumaon Regiment Widows Welfare Association runs a shawl weaving center here.

At a distance of 14 km from Dwarahat, 48 km from Ranikhet, and 78 km from Almora, Dunagiri Temple or Doonagiri Temple is the most famous temple situated at Dunagiri in Almora district of Uttarakhand.

The temple is dedicated to Goddess Durga in the form of Goddess Vaishnavi Devi and is located on a small hillock of Kumaon Hills. According to the legend, when Hanuman was carrying the rock laden with Sanjiwani to rescue Laxman injured in the battle of Ramayana, a piece of the hill fell here. This incident gave this place its name Doonagiri.

The temple is popularly known as Mangalikhan among locals. The Temple is one of the two Vaishnavi Shakti Peeths in India other one being Vaishno Devi temple in Jammu Kashmir. It is believed that the bronze plate inside the temple dates back to 1181 AD. Considered to be one of the powerful Shakti Peeths, the temple offers a panoramic view of the Gogas Valley. Visitors need to climb a stairway of 500 steps to reach the temple. The temple attracts .....