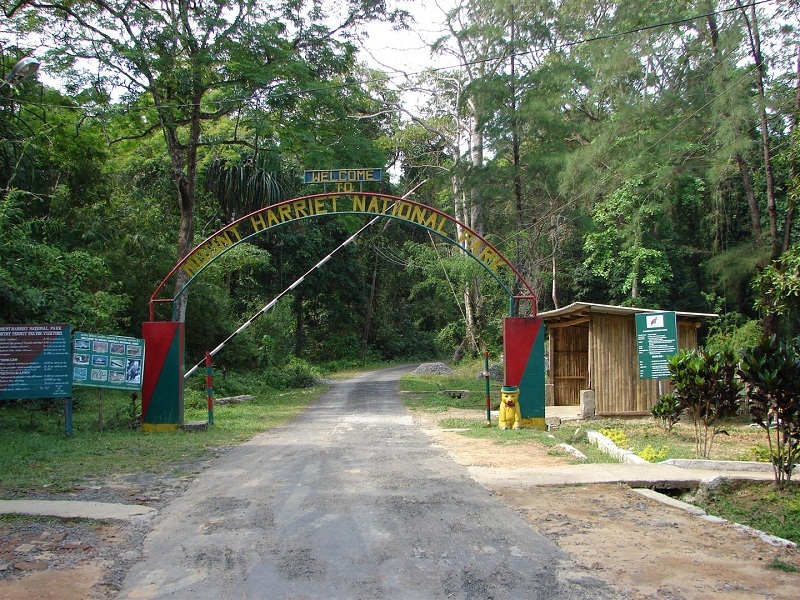 #7 of 31 Places to Visit in Andaman Islands

At a distance of 48 km by road from Port Blair Central Bus Stand and 15 km by ferry from Chatam Jetty, Mount Harriet National Park is a national park located in Ferrargunj tehsil of Andaman & Nicobar Islands, India. The place is shown on the reverse side of 20 Rupee note in India.

Mount Harriet National Park was originally a reserve forest and it was established as a national park in the year 1979. Sprawling over an area of 47 sq. km, Mount Harriet was once the summer headquarters of the Chief Commissioner during the British Raj. The park is named in commemoration of Harriet Tytler, the second wife of Robert Christopher Tytler, a British army officer, naturalist and photographer, who was appointed Superintendent of the Convict Settlement at Port Blair in the Andamans from April 1862 to February 1864. Harriet is remembered for her work in documenting the monuments of Delhi and for her notes at the time of the Revolt of 1857 in India.

Mount Harriet (383 m) is the highest point in the park and is the third-highest peak in the Andaman & Nicobar archipelago next to Saddle Peak (732 m) in North Andaman and Mount Thullier (568 m) in Great Nicobar. The peak offers some of the most breathtaking views of sunrise, Port Blair city, the Ross Island and the Havelock Island.

The park covers with dense evergreen forests of outstanding natural beauty. The hills are steeper on the eastern side and the beaches on the eastern coast are generally rocky, with a few sandy patches. The park has rich fauna which include 90 species of birds, 27 species of reptiles, 12 species of mammals and 120 species of moths. King Cobra, Andaman Cobra, Andaman pig, Shrew, Bats, saltwater crocodile, robber crab, turtles and wild pigs etc. are some popular fauna along with the elephants trained to carry large logs in the park.

The park is accessible from Port Blair by ferry or by road journey. The ferry service takes 15 minutes to reach Bamboo Flat from Chatham jetty. There is no public transport from Bamboo Flat to Mount Harriet Peak so visitors can either walk those 7 km or hire an auto. It is a reserved area that comes under the Forest, so one has to take a pass at the park entrance.