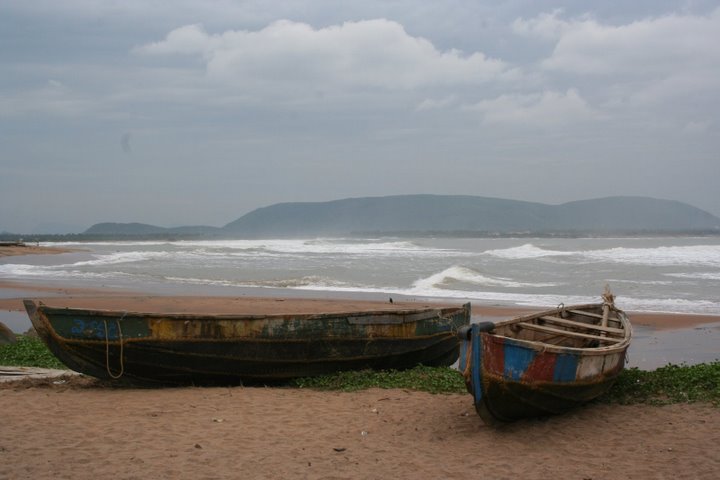 At a distance of 32 km from Vizag Railway Station, 377 km from Vijayawada, 227 km from Rajahmundry & 628 km from Hyderabad, Bheemunipatnam popularly known as Bheemili is famous for a picturesque beach. It is located at the mouth of the river Gosthani which merges with Bay of Bengal at Bheemunipatnam.

The beach is known for its soft golden sand, blue water and unspoiled beach front. A concrete pathway too has been laid along the beach to hold statues of Buddha, Five Pandavas and a dinosaur. The beach is considered to be safe for swimming. It is an ideal place for nature lovers and adventurers. The beach is famous for several water sports like snorkeling, scuba diving, swimming and water-skiing. Boating facility is also available here.

Bheemili beach provides a beautiful seafront to the fishing town of Bheemunipatnam, one of the oldest municipalities in India and is dotted with thatched cottages and ancient Dutch bungalows that are a reminder of its historic past. The 17th century ruins of a fort and cemetery built by the Dutch are seen here. The cemetery named Hollanders Green has some tombs embossed with the skull and cross bones motif of sea pirates. It is located near the beach and it is one of the oldest cemeteries in India. The Bheemili port used to operate passenger vessels to Madras and Calcutta during the British rule.

Bheemunipatnam was an important Buddhist center. Evidence of Buddhism dating back to the second century has been found on the Pavuralakonda hillock, which surrounds the beach. Several Buddhist remains have been found during excavation. On the top of a hill, there is a light house and a small shrine dedicated to Lord Narasimha. St. Peter's Church, Maharaja's guest house, clock tower are the added attraction here.

There are number of accommodation options and one can find many budget hotels with modern amenities. Visitors can also stay at the Keertana Vanam Beach Resort run by the Visakhapatnam Urban Development Authority (VUDA).