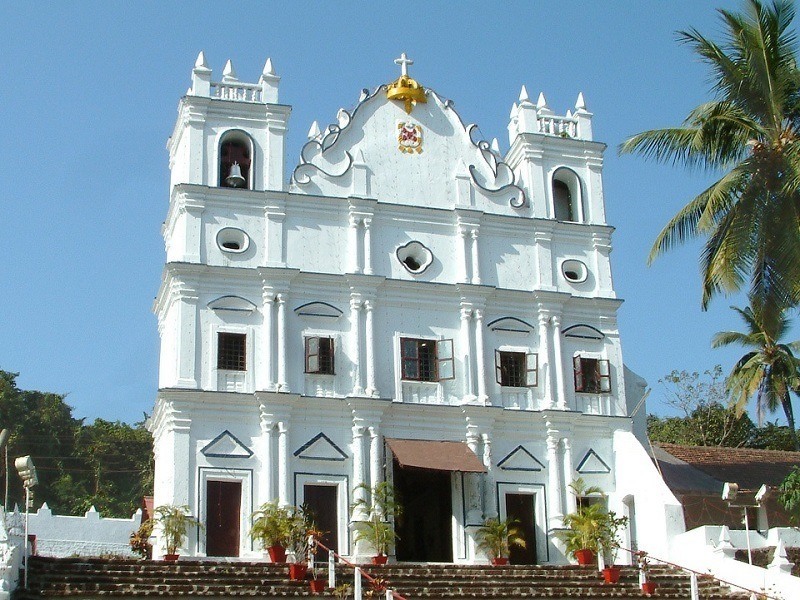 At a distance of 7 km from Panjim Kadamba Bus Stand, 34 km from Vasco Da Gama Railway Station and 15 km from Mapusa, The Reis Magos Church is situated in North Goa.

The Reis Magos Church also known as Church of the Three Magi Kings was built in 1555 in the town of Reis Magos. This church was built by the Franciscan friars who watched over the missionary work here. They also founded a small educational institution over here. This Church is one of the oldest churches of Goa.

Three Kings Church was dedicated to Saint Jerome. It is believed that this church was constructed on the remains of an ancient Hindu temple. Two typical symbols of the Hindu Vijayanagar temple architecture bas-relief lion figures can be seen on the flanks, at the start of the steps going up to the Church. The Church was renovated in 1771 and the pillars of the church were created in 1764. The two Viceroys of Goa were buried in the premises of the church and their gravestones are intact till date.

Reis Magos Church is the first church in Bardez district. This Church is painted white from the outside and the inner walls are bright and magnificent designs. The highlight of its fabulous interiors is multi-colored wood relief that shows the Three Wise Men giving gifts to the baby Jesus. The intricately painted canopy behind the altar adds to the outstanding lavishness of the church interiors. The altar is at a great height making the prayer hall exquisite.

In this church near the foot of the stairs a small shrine can also be located. It is dedicated to Our Lady of Hope. In the church corridor an impressive carved slab on the right of the altar along the church side marks the burial place of one of the greatest Portuguese Viceroy, Dom Luis de Ataide.

The Reis Magos Church is famous for annual feast that is held on 6th of January and is dedicated to the Three Wise Men of the Christmas story namely Caspar, Melchior, and Balthazar. This festival is called the Fiesta de los Tres Reyes Magos. During this feast local youth of the village play the role of the Three Kings of Magi. They start a procession from the church and go around the village rejoicing the journey of the three kings who went to worship the Holy Infant Child.