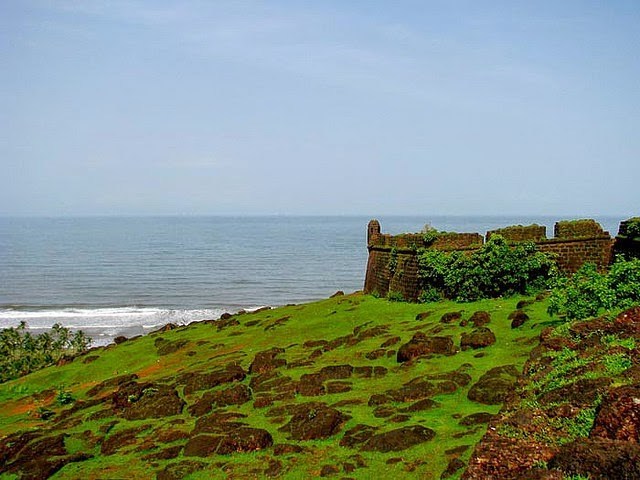 Place Location: Near Chapora Village And North Of Vagator Beach

At a distance of 19 km from Panjim Kadamba Bus Stand, 46 km from Vasco Da Gama Railway Station and 11 km from Mapusa, The Chapora Fort is situated in North Goa. It is one of the top tourist places in Goa.

Built in red laterite stones, the fort has steep slopes on all the sides and stands on an area which has irregular outer plan. This massive fort was constructed by the king of Bijapur, Adil Shah. This is one reason why it has been named Shahpura, which means the 'town of Shah'. The Chapora Fort is one of the prime attractions on Goa.

The fort was built in order to keep a watch on Hindu raiders who wanted to set up their territory in Goa. The fort was destroyed after the rule of Adil Shah and was rebuilt by the Portuguese in 1617, on the site of an earlier Muslim structure. The Portuguese troops surrendered to the Maratha ruler Sambhaji in 1684 but the locals were not too pleased with this situation and hence Marathas were forced to withdraw their forces from the fort in 1717. Portuguese took over it again and rebuilt the fort until they finally abandoned it 1892.
Today the Chapora Fort lies in ruins and although one can see the heads of the two tunnels to aid in escaping in case of an emergency. The massive ramparts and scattered Muslim tombstones are all that is left of this fort. The fort gives a spectacular view of the Vagator and the Anjuna beach.

There are no particular visiting hours to visit this fort, however early morning and evening are preferred as you can get some great views during these hours. Sunset from the fort is a beautiful experience. The path to the Fort from parking area is filling with red laterite stones and is slippery. One has to be careful while walking on this path. It is advised to return back before it's dark.