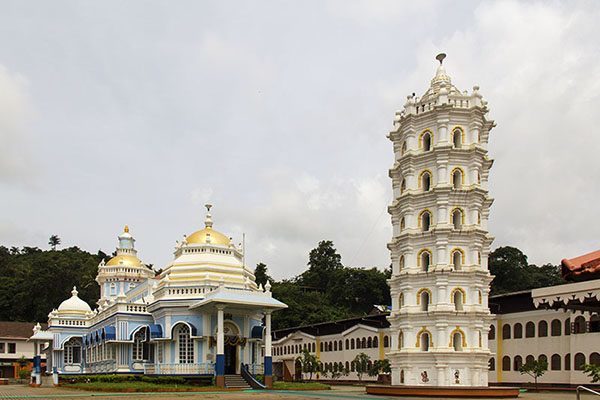 At a distance of 21 km from Panjim Kadamba Bus Stand, 37 km from Vasco Da Gama Railway Station and 34 km from Mapusa, Shri Mangueshi Temple is situated in North Goa. It is of the must visit Goa tourist places and a major pilgrimage site of Goa state.

Shri Mangeshi temple is located on a hillock at Mangeshi Village in Priol, Ponda Taluka. Shri Mangeshi Temple is one of the largest, wealthiest and most popular Hindu shrines in Goa. Mythology says that Lord Shiva came to Goa after having lost everything in a game of dice against his wife Parvati. When Parvati came looking for him, he disguised himself as a tiger and frightened her. In a state of shock, Parvati uttered the words ''Trahi Mam Grisha'', which means ''O Lord of the Mountains, save me''. Shiva then reverted into his normal form and returned with her. The words, ''Mam Grisha'' came to be associated with this story and Shiva came to be known as 'Manguesh'. The place where this tale occurred was marked by building a temple at the site. This location is to the south of the Zuari River where the present day village of Cortalim stands.

When Salcete was captured by the Portuguese in 1543, the devotees shifted the deity from Cortalim to a nearby village that came to be known as Mangeshi. The temple which is believed to be built around 1744 has been rebuilt and has undergone several renovations. It was built with income from land donated by a local ruler under the Marathas.

This beautiful temple is dedicated to Lord Shiva. It belongs to the typical Goan Hindu temple style of architecture. It is very distinctive with its white towers, welcoming at the entrance even though it is small and exquisite.

In the temple of Mangesh is a prominent Nandi Bull which is considered to be the Vahana (Vehicle) of Shiva. The temple complex consists of a spacious courtyard surrounded by the temple itself and rooms for weddings and pilgrims. The temple also has a magnificent water tank, which is believed to be the oldest part of the temple. The ''Deepastambha'' is an eye catching structure, it is a seven storey octagonal lamp tower. Considered as the tallest and most imposing column in Goa, it looks picturesque when illuminated at night with traditional oil lamps during festival nights. The tower is crowned with a small dome. The sanctum houses a Shiva Lingam. A golden Shesha, the Linga and an image of Shiva constitute the main altar. It has shrines of Parvati and Ganesha.

Magha Pournima is the main annual festival which is held in February. The main event during the annual festival is the Ratha Yatra or the pulling of the chariots. This annual festival attracts thousands of people to the temple. The deity is given a special deck up and is taken around the streets on a chariot pulled by devotees.