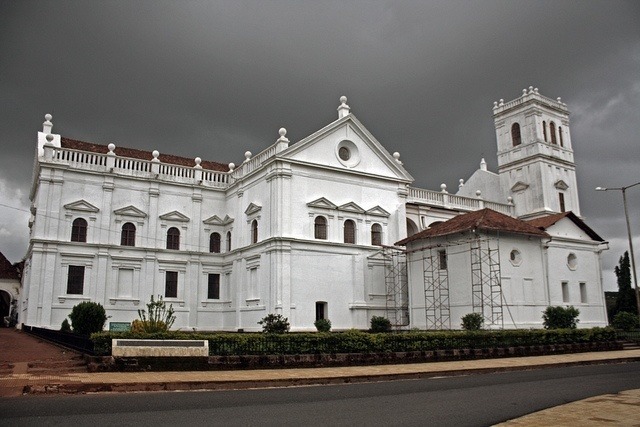 Travel Tips: This place is usually visited from Basilica of Bom Jesus (230 mts).

At a distance of 9 km from Panjim Kadamba Bus Stand, 27 km from Vasco Da Gama Railway Station and 23 km from Mapusa, Se Cathedral is considered to be one of the largest churches in Asia, situated in Old Goa, opposite to Basilica of Bom Jesus. The beautiful Se Cathedral is one of the top places to visit in Goa. This place is part of UNESCO World Heritage Site (Churches & Convents of Goa).

The Se Cathedral is dedicated to St. Catherine. It is also known to be the oldest and the most celebrated religious buildings in Goa and has the prestige of being the seat of Archdiocese of Goa. According to history, Alfonso Albuquerque in 1510 defeated the Muslim army on the feast day of St. Catherine of Alexandria and took possession of Goa. The construction of this imposing church began in 1562 during the reign of King Dom Sebastiao and substantially completed by 1619. The main altars however were not finished until the year 1652. It was consecrated in 1640. This 16th century monument took 80 long years to complete. It is also called St. Catherine's Cathedral.

The Se Cathedral is built in the Portuguese-Gothic style. The exterior of the church is Tuscan while the interior is Corinthian. The church is 250 ft in length and 181 ft in breath and 115 ft in height. The main attractions of the Cathedral are the 15 altars, which are dedicated to Our Lady of Three Needs, Our Lady of Anguish or Our Lady of Hope. The grand alter is highly ornate and is dedicated to St. Catherine of Alexandria. It has the carvings depicting the major events of the life of St. Catherine.
Close to the main altar is placed the throne of Archbishop of Goa. On the right in the order of placing are the Chapels of St. Anthony, St. Bernard, the Miraculous Cross and The Holy Ghost. It is said that a vision of Christ had emerged on the Miraculous cross in 1919 and that the cross is growing in size. On the left side are the chapels dedicated to Nossa Senhora de Necessidades, St. Sebastian, the Blessed Sacrament and the last to Nossa Senhora de Boa Vida.

The bell in the existing tower is often referred to as the Golden Bell. The bell is known for its melody and rich tone and is the largest bell in Goa and one of the best in the world. The tower on the Southern side collapsed in 1776 and it was never built.

The adjoining convent has been turned in to an Archeological Museum and is open to the public. The Franciscan church lies to the west of the cathedral.