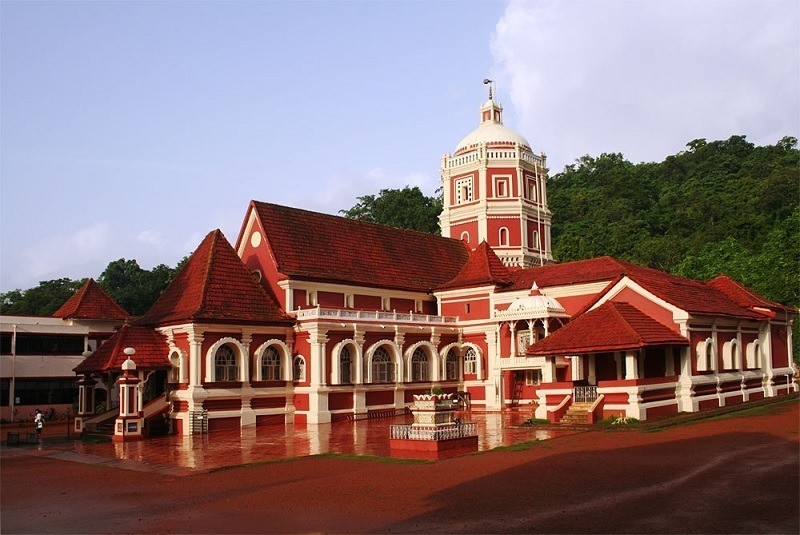 Shri Shantadurga Temple is a large temple located at the foothill of Kavlem village in Ponda Taluka. This temple is considered as one of the most important and the biggest temple in Goa. This temple is dedicated to Goddess Shantadurga the Goddess of Peace. The deity is also called 'Santeri' informally. According to the legend, a fierce battle was made between Shiva and Vishnu that Lord Brahma prayed to Parvati to intervene, which she did in the form of Shantadurga. Shantadurga placed Vishnu on her right hand and Shiva on her left hand and settled the fight. The deity of Shantadurga is shown as holding two serpents one in each hand representing Vishnu and Shiva. This avatar of Shree Jagdamba Devi which had come to make peace between Shree Vishnu and Shree Shiva came to be known as Shree Shantadurga Devi.

The temple was initially located at Cavelossim but when it was being destroyed by the Portuguese in 1564, the deity was shifted to Kavlem. A small laterite mud shrine was built and the deity was installed here. The mud-shrine was converted into a beautiful temple whose foundation stone was laid in 1730 during the reign of Maratha ruler Shahu Raje of Satara at the request of Naro Ram Mantri, one of his ministers. The temple was completed in 1738 and renovated in 1966.

The temple is a combination of Indo-Portuguese architecture. Unlike other temples of Goa, the temple has a Pyramidical Shikara, Roman-arched windows and a flat dome encircled by balustrades. The maroon, peach and white colour paint of the temple gives the temple a serene beautiful look. Another major attraction of the temple complex is the Nayanmanohar Deepsthamba. This Deepsthamba is lighted during the festival times and the beauty of it is beyond description. On either side of the temple building are the big buildings of Agarshala. There is a big lake beyond the compound wall in front of the temple. The highlight of the temple is its golden palanquin (palkhi) in which the deity is carried on festive occasions.

The Jatra (annual festival) is held during December. The idol is taken out in a procession in a golden palanquin during the festival. Some of the important festivals that are celebrated at the temple are Lalkhi Utsav, Muktabharani Utsav, Tulsi Vivah and Kala Utsav.