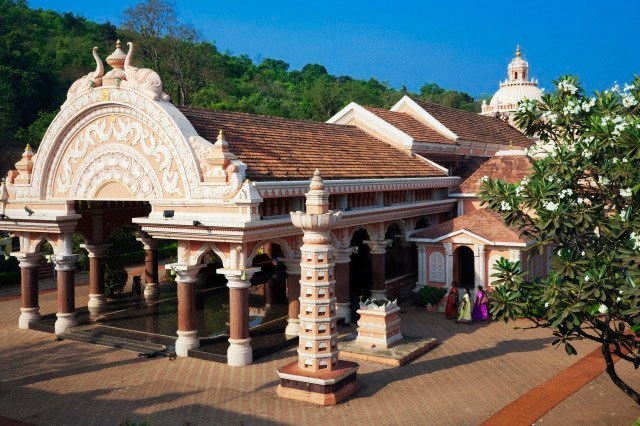 At a distance of 27 km from Panjim Kadamba Bus Stand, 37 km from Vasco Da Gama Railway Station and 22 km from Margao Railway Station, Shri Mahalaxmi Temple is situated in North Goa. It is one of the most visited places in Goa and an important pilgrimage site for Hindus.

Shri Mahalaxmi Temple is situated in the village of Bandora or Bandivade about 4 km from Ponda. This Temple is dedicated to Lord Vishnu's consort Mahalaxmi. The temple is considered as the abode of the original Goddess of the Shakti cult and its unique feature is that the Devi wears linga on her head. The idol of Mahalaxmi with four arms holding a sickle, a club, a dagger and a vessel containing Prasad and flowers, has a close resemblance to that of Mahalaxmi idol at Kolhapur. Besides the main black granite stone idol, there was another idol of the Devi made of panchloha. The Sabhamandap has a gallery of 18 images, out of 24 images of emanatory aspects of Bhagavata sect., it is one of the largest galleries of wooden Images of Vishnu in India.

The Goddess Mahalaxmi was worshipped by the Shilahara rulers and the early Kadamba Kings of Goa. The temple was originally in the village of Kolambe near present day Colva beach. When the Portuguese destroyed it, devotees smuggled the murti of Mahalakshmi first to the town of Talaulim where it resided in the home of a priest. It was then moved to its present location in Bandivade in Ponda where a small temple was established in 1866. Upgrades and expansions have occurred ever since. Today it is a magnificent example of Konkani temple architecture in Goa.

The temple has a modern structure. The facade is a beautifully decorated arch and entrance with sculptures of two elephants around the outer spire. Facing the facade is a black stone deepasthamba next to another deepasthamba bearing the temple colour. Alongside is a Tulsi Vrindavan. The sabhamandapa has beautiful antique chandeliers attached to the ceiling. Its walls are adorned with paintings engravings of Lord Hanuman, Lord Garuda and Lord Ganesha. The inner walls are covered with paintings, engravings depicting stories of the puranas.

Navaratri is celebrated grandly here. Other festivals celebrated are Shri Ram Navami, Shri Mahalakshmi Pratishthapana Day in Vaishakha and Maha Shivaratri Festival in the month of Magha. The main idol of the Goddess Mahalaxmi is also taken out during the festival of Mahashivratri, on a chariot carried on the shoulders of devotees.