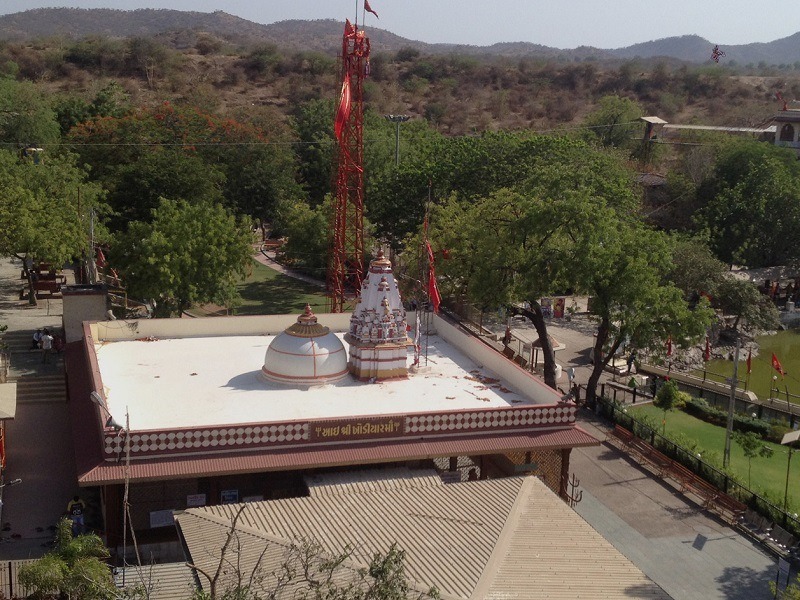 #7 of 17 Places to Visit in Bhavnagar

At a distance of 16 km from Bhavnagar, Khodiyar Mata Temple is a famous Hindu temple located at Rajpara village near Bhavnagar of Gujarat. Situated on the banks of the Tataniya Wali Lake, it is one of the important places of pilgrimage in Saurashtra and among the best places to visit in Bhavnagar.

Shree Khodiyar Mata Mandir was constructed in 1911 CE by the then Maharaja of Bhavnagar. The temple is dedicated Khodiyar Maa, a warrior Hindu goddess born in Charan caste around 700 AD. She was the main deity of the royal family of Bhavnagar and also the ancestral goddess of Bhavnagar people. The Khodiyar Mata Temple at Rajpara is one of the oldest and largest temples in Gujarat.

According to history, Maharaja Wakhatsinghji Gohil ruled the state of Bhavnagar from 1748 to 1816. He was a devout follower of Khodiyar Ma and often visited the shrine at Mandel. There he prayed to the goddess to bring her holy presence to Sihor, the then capital of Bhavnagar state. Khodiyar Ma agreed and told him to lead the way, only on the condition that he doesn't turn around and check if she is following. Wakhatsinghji walked on until he reached a place right before Sihor. There he turned around to check for Khodiyar Ma, who said she would walk no further for he had looked. Mataji and her sisters decided to set base there. This place was Rajpara, which became the shrine of Khodiyar Ma.

There is a huge mandap inside the temple where one can see the beautiful idol of Khodiyar Mata. The surroundings of the temple consist of a crystal clear lake, few mountains, and lush green vegetation. Every year the temple sees devotees of Khodiyar Ma traverse long distances to visit her shrine. The temple trust also offers the facility to stay within the pious atmosphere of the place. Don't miss to get Lapsi, a prasad made of wheat and also food (lunch & dinner), which is served free to all visitors.