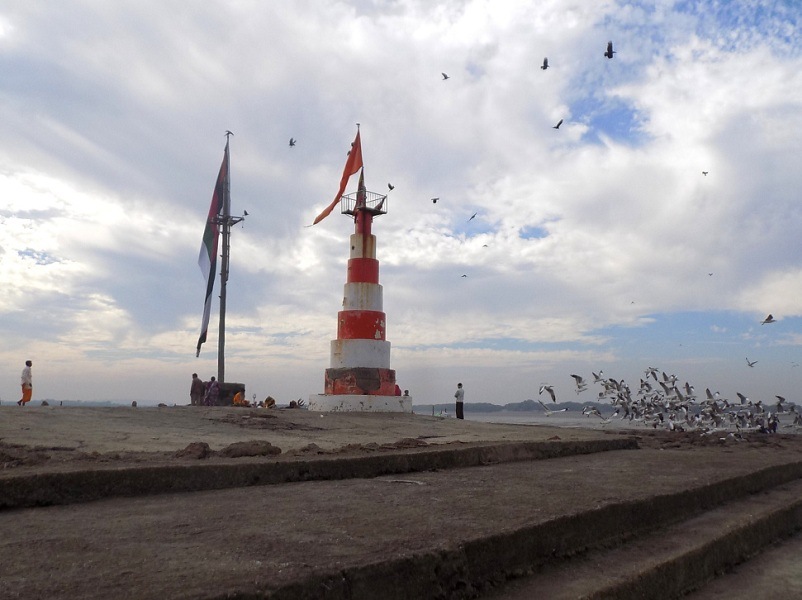 At a distance of 28 km from Bhavnagar Railway Station, Nishkalank Mahadev Temple is a Hindu temple located at Koliyak near Bhavnagar, Gujarat. Situated in Koliyak Beach, it is one of the rarest sea temples in India you must include in your Gujarat trip and among the most visited places of pilgrimage in Bhavnagar.

Located about a kilometer into the sea, the temple is dedicated to Lord Shiva. The temple has 5 distinct swayambhu Shiva lingams on a square platform and each is having a Nandi statue facing it. This temple is submerged during high tides in the sea and emerges during low tides to reveal itself majestically, promising its devotees to wash away all sins. During the high tide, the idol of the lord is submerged and all that can be seen are the flag and a pillar. The temple was built with special care to withstand high tides and is truly remains an unsolved mystery to modern engineers and technology experts.

The temple is believed to be built by the Pandavas after the Kurukshetra War. Legend says that after killing all the Kauravas, Pandavas began to feel guilty for their sins. To discover reclamation for their sins, Pandavas consulted Krishna who handed them a black flag and a black cow and asked them to trail and said when both the flag and the cow turn white, they will all be forgiven. Lord Krishna also asked them to apologize to Lord Shiva after that. They followed the cow everywhere it took them and acknowledged the flag for many years to various places, yet the shades did not change. Finally, when they reached the Koliyak Beach, both turned white and soon the Pandavas meditated on Lord Shiva and apologized for the sins committed by them. Lord Shiva impressed by their prayers, showed up in lingam form to each brother. Hence, they named it as Nishkalank Mahadev which means being spotless, clean, and innocent.

The famous fair known as 'Bhadarvi' is held on the new moon night in the month of Shravan, as per the Indian calendar. The temple festival is initiated by hoisting the flag by the Maharajas of Bhavnagar where this flag is on for 364 days and is changed only during the next temple festival.

The devotees visit the temple by walking barefooted from the shore during the low tide. Devotees first wash their hands and legs in a pond called Pandavas pond, upon reaching the temple and then visit the shrine. The tides are active especially during no moon and full moon days and devotees eagerly wait for the tides to disappear on these days. So, kindly note the schedule of high tides and low tides of the sea before visiting the shrine as the entire visit of the Mandir depends on it.