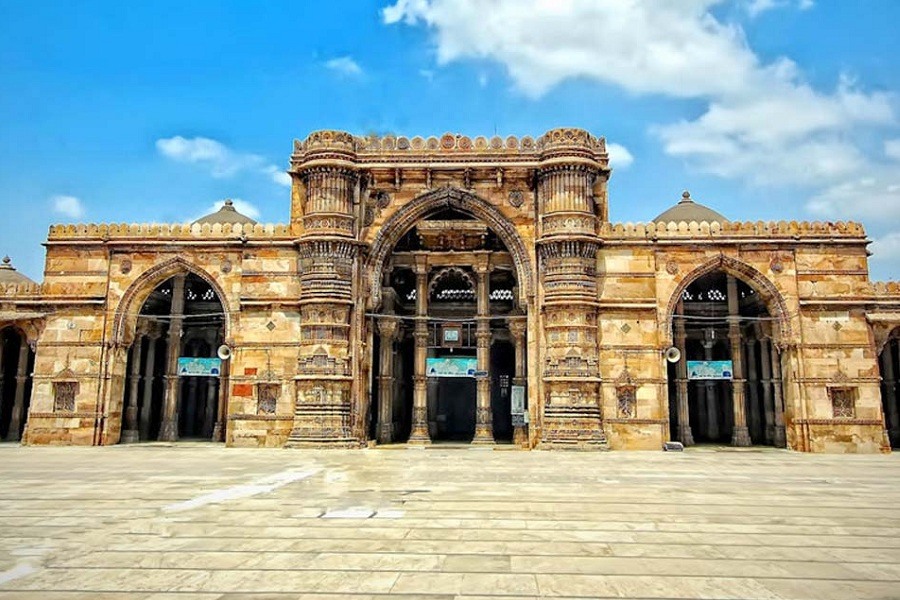 At a distance of 29 km from Gandhinagar, 109 km from Vadodara, 175 km from Bhavnagar, 220 km from Rajkot, 230 km from Mount Abu, 250 km from Udaipur, 257 km from Surat, 310 km from Jamnagar, 534 km from Mumbai, 585 km from Bhopal, 681 km from Jaipur and 905 km from Delhi, Ahmedabad is the largest city and also the former capital of Gujarat. Situated on the banks of the River Sabarmati, it is one of the popular places of heritage in India, and among the must-include places in Gujarat tour packages.

Ahmedabad is India's first UNESCO World Heritage City and is also regarded as one of the fastest-growing cities in India. Also known as Amdavad, the city of Ahmedabad is the commercial hub and also the living symbol of the rich cultural heritage of Gujarat state. Popularly called the Land of Gandhi, Ahmedabad is closely associated with Mohandas Karamchand Gandhi, the father of the nation. It has been one of the most important centers of trade and commerce in western India since medieval times. Presently it is famous for its textile mills and is often referred to as the Manchester of the East.

The history of Ahmedabad dates back to the 11th century when it was known as Karnavati after the name of King Karandev, a Solanki Ruler. The Solanki rule lasted until the 13th century when Gujarat came under the control of the Vaghela dynasty of Dwarka. Gujarat was conquered by the Sultanate of Delhi at the end of the 13th century AD. Later, Sultan Ahmed Shah conquered the place and renamed it Ahmedabad in 1411 AD. In the year 1573, the city of Ahmedabad was taken over by the Mughal emperor Akbar. Peshwas and Gaekwads jointly ended Mughal rule and established Maratha Empire in 1583. The British captured Ahmedabad in 1817 and was under the British till independence.

The city of Ahmedabad played an outstanding role in India's freedom struggle. The Indian independence movement developed strong roots in the city when Mahatma Gandhi established two ashrams, the Kochrab Ashram near Paldi in 1915 and the Satyagraha Ashram on the banks of the Sabarmati in 1917 that would become centers of intense nationalist activities. Ahmedabad became the capital of the new state of Gujarat after separated from the State of Bombay in 1960.

Ahmedabad is a land of fairs and festivities. Uttarayan International Kite Festival, Navratri, Diwali, and Holi are the most famous festivals celebrated with great excitement and enthusiasm in Ahmedabad.

The best time to visit Ahmedabad is from October to March while the peak season is from November to February. Better to avoid summer as the sun is scorching during the days and the temperatures are high.

How to Reach Ahmedabad - Full Details

Top 10 Places to Visit in Ahmedabad

#1 of 24 Places to Visit in Ahmedabad

At a distance of 8 km from Ahmedabad Junction, Sabarmati Ashram, also known as Gandhi Ashram is located in the Sabarmati suburb of Ahmedabad. Situated on the banks of the River Sabarmati, it is one of the prime Ahmedabad places to visit.

Formerly known as Satyagraha Ashram, the Sabarmati Ashram was established by Mahatma Gandhi in the year 1915 at the Kocharab Bungalow of Jivanlal Desai, a barrister friend of Gandhi. Later on, it was shifted to the banks of Sabarmati River and then it came to be known as 'Sabarmati Ashram'. This was one of the residences of Gandhi, who lived here with his wife, Kasturba Gandhi from 1917 to 1930 CE.

The ashram was served as one of the main centers of the Indian freedom struggle. Gandhiji led the Dandi March or the Salt Satyagraha from this Ashram on 12th March 1930 and had taken a vow that he will not return to Sabarmati Ashram until India gained independence. In gratitude .....

#2 of 24 Places to Visit in Ahmedabad

At a distance of 29 km from Ahmedabad Junction, Swaminarayan Akshardham is a Hindu temple located in Gandhinagar city of Gujarat State. It is one of the most magnificent temples in India, and among the top attractions in Ahmedabad.

Dedicated to Swaminarayan, Akshardham Temple was commissioned by Bochasanwasi Shri Akshar Purushottam Swaminarayan Sanstha (BAPS) after initiation by its promoter, Pramukh Swami Maharaj in 1979. It took 13 years to complete and was inaugurated in 1992. It is a Hindu house of worship and a spiritual and cultural campus dedicated to devotion, education, and unification. A specimen of fine craftsmanship, the Akshardham Temple in Gandhinagar is one of the largest and most prominent temples in Gujarat state.

Sprawling across an area of 23 acres, the temple complex consists of a splendid shrine, large prayer halls, exhibition .....

#3 of 24 Places to Visit in Ahmedabad

At a distance of 21 km from Ahmedabad Junction, Adalaj Stepwell, also called Adalaj ni Vav is a stepwell located in the village of Adalaj near Ahmedabad city of Gujarat. It is one of the famous places of heritage in Gujarat, and among the must-include places in Ahmedabad tour packages.

Also known as Rudabai Stepwell, Adalaj Stepwell was built in 1499 by Queen Rudabai, wife of Vaghela chief, Veer Singh. According to history, the construction of stepwell was started by King Rana Veer Singh and he died in a war with King Mahmud Begada unfortunately. Begada fell for the beauty of the widowed Queen Rudabai and asked her to marry him. The Queen agreed to marry Begada on the condition that he completes the construction of the stepwell that was started by her husband. He agreed and started the construction again. When the well got completed, Rani Rudabai jumped into the vav and committed .....

#4 of 24 Places to Visit in Ahmedabad

At a distance of 2 km from Ahmedabad Junction, Jama Masjid, literally known as Friday Mosque, is a splendid mosque situated within the old city region of Ahmedabad. Located on the western side of Manek Chowk, it is one of the beautiful mosques in India, and among the best pilgrimage in Gujarat.

Also known as Jami or Jumma Mosque, Jama Mosque was built in 1423 AD during the reign of Ahmed Shah I, the founder of Ahmedabad city. It is considered the largest mosque in the Indian subcontinent built in this period, and among the must-include places in Ahmedabad tour. The mosque was originally intended only for the private use of the sultans. This edifice was built by using materials retrieved from the demolished Hindu and Jain temples. The most striking feature of the construction is its unique meshwork in the main prayer hall, which allows enough illumination into the room without .....

#5 of 24 Places to Visit in Ahmedabad

Sabarmati Riverfront is a project undertaken by Gujarat Government in order to preserve the river and promote tourism. Even though the project was proposed in 1960s, the construction was began in 2005. Since 2012, the waterfront is gradually opened to public with various facilities. The prime agendas of this project include environment improvement, social infrastructure and sustainable development.

The main feature of this 11 km long riverfront project is a two-level promenade situated on both sides of the river where the lower level serves only pedestrians and cyclists while the upper level is capable of hosting numerous cultural and educational events, leisure activities, large public parks and plazas and a few areas for commercial and retail development. This is an ideal spot .....

#6 of 24 Places to Visit in Ahmedabad

Covering an area of 76 acres, Kankaria Lake was built by Sultan Qutub-ud-Din in the year 1451 AD. It is basically an artificial lake with 34 sides and having shore length of quarter mile. The lake has slopes instead of steps at six places to reach water and is covered by square cupolas each raised on 12 pillars.

Lying on the south eastern side of the Ahmedabad city, Kankaria Lake is one of the most favorite picnic spots of the people of Ahmedabad. There is a beautiful island in the center of the lake known as Nagina Wadi or Bagh-e Nagina which houses a small summer palace and a musical fountain with multicolored laser lights that are displayed during night. An evening walk around the lake when the entire area is lit-up .....

#7 of 24 Places to Visit in Ahmedabad

At a distance of 2.5 km from Ahmedabad Junction, Bhadra Fort is an ancient fort situated on the east bank of Sabarmati River in Ahmedabad city of Gujarat. It is one of the historical places in Gujarat and among the most popular Ahmedabad Tourist Places.

Bhadra Fort was built in 1411 AD by Sultan Ahmad Shah I, the founder of Ahmedabad city. In the year 1573, Bhadra Fort was taken over by the Mughal emperor Akbar. Under the rule of Mughals, Ahmedabad became the leading center of textiles in Gujarat. Peshwas and Gaekwads jointly ended the Mughal rule and established Maratha Empire in 1583 CE. The British defeated the Marathas in the war held between 1775 AD and 1782 AD but they gave back the fort after signing a treaty with the Marathas. The British captured the fort in 1817 CE and was used as a jail till independence.

The fort was named so because of the presence of Bhadra Kali Temple which was built during the reign of the Marathas. .....

#8 of 24 Places to Visit in Ahmedabad

At a distance of 2 km from Ahmedabad Junction, Swaminarayan Temple is a Hindu temple situated at Kalupur area of Ahmedabad. It is one of the popular places of pilgrimage in Gujarat and among the best places to visit in Ahmedabad.

The structure of the temple is mesmerizing and has been designed like a mansion. The temple is carved in Burmese teak, and every arch and bracket is painted with bright colors. It is adorned with brilliantly ornamented domes and .....

#9 of 24 Places to Visit in Ahmedabad

At a distance of 13 km from Ahmedabad Junction, ISKCON Temple is a Hindu temple located on Sarkhej-Gandhinagar Highway in Ahmedabad, Gujarat. Also known as Sri Radha Govind Dham, it is one of the top places of pilgrimage in Gujarat and among the famous places to visit in Ahmedabad.

ISKCON Temple in Ahmedabad is dedicated to Lord Krishna and his beloved lover Radha. The temple was opened in 1997 on the orders of A. C. Bhakti Vedanta Swami Prabhupada, the founder of the ISKCON Society. The temple has much significance as it is still considered as the most popular temples in Ahmedabad. The idols of Lord Krishna & Radharani are attractive and many people come here for worshipping Lord Krishna to fulfill their needs.

Sprawling over an area of 4 acres, the architecture of the temple is a blend of Gujarati-Sompura and Rajasthani-Khamira style. The temple features the largest temple rooms in India, which can accommodate around 4000 devotees. One can see intricate marble work, beautiful .....

Sardar Vallabhbhai Patel National Memorial Museum is housed in Moti Shahi Mahal, which was constructed between 1618 and 1622 for Mughal Emperor Shah Jahan. The building was later used as a British cantonment to house the senior officials. In 1878, the great Bengali poet Rabindranath Tagore stayed here and this building served as an inspiration behind his story The Hungry Stones. This palace became the Raj Bhavan, the official residence of the Governor of Gujarat from 1960 to 1978 and was transformed into a national memorial dedicated to Sardar Vallabhbhai Patel in the year 1978. Later in the year 2013, the infrastructure of the museum was enhanced with the latest .....