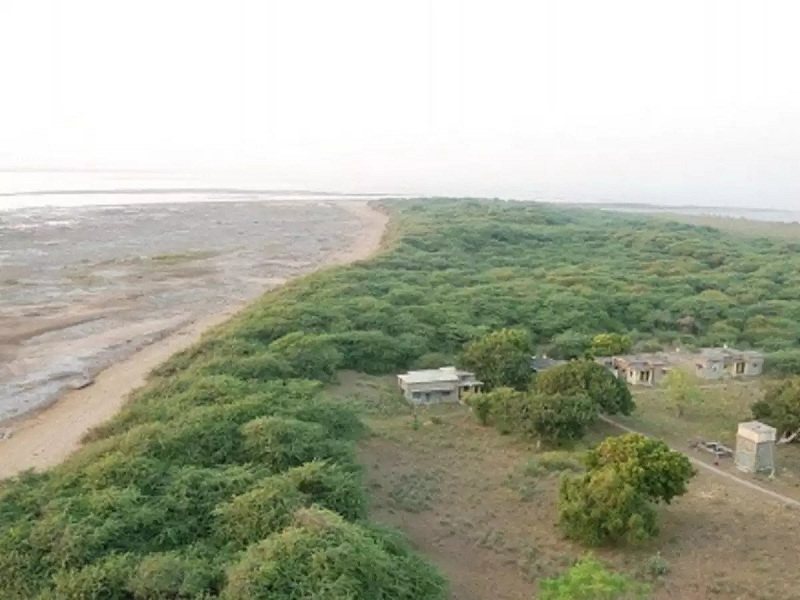 At a distance of 6 km from Ghogha and 30 km from Bhavnagar, Piram Bet is a small island in the Gulf of Cambay, Gujarat. Also called Piram Island, it is one of the beautiful islands on the coastline of Gujarat and among the best places to visit during your Bhavnagar trip.

The Piram Bet Island is covering over an area of about 186 acres. History says that the island was under Muslim soldiers of Delhi Sultanate in the early 14th century and was captured by Mokhadaji Gohil, the Gohil chief of Umrala in 1325 CE. He made the island as his headquarters, built a fort and levied toll from all ships passing up the Gulf of Cambay. He became a noted pirate in Gulf. His demands came to the knowledge of the emperor Muhammad bin Tughlaq who was then quelling a revolt in Gujarat. He killed Mokhadaji in 1347 CE and destroyed the fort of Piram Island. The island fell into obscurity after the destruction of the fort. Later in 1729, Mulla Muhammad Ali, a merchant from Surat, built a fort on Piram Bet with an intention to establish himself as an independent chief. Subsequently, it falls under the royal family of Bhavnagar State who had built a bastion on the south west corner of the island to keep watch on the maritime activities.

The British built the 24m high circular masonry lighthouse tower on the bastion in 1864 CE. The lighthouse and quarters are now owned by Directorate General of Lighthouse and Lightships, Government of India which was the only settlement on the island and was closed down in 2010. The island is under the ownership of decedent of royals of Bhavnagar, Siddhrajsinh Raol who intended to sell it in 2012.

Piram Bet is one of the few privately owned virgin islands of India. The island has the fossils of dinosaur eggs and gigantic turtles with some dating back to 8,000 years. In the 1860s, the fossils of two basic species of giraffes, Bramatherium and Sivatherium were found. Also, the fossils of Hipparion found on the island. Several shipwrecks found around the island that are dated to the 14th century. Besides, the island has mangrove vegetation and also a nesting site for two endangered species of sea turtles - Olive ridley turtles and Green turtles, which arrives for nesting in August-September.

To reach Piram Bet Island, one has to travel from Bhavnagar to Ghogha by road and then take a boat ride during high tide which takes around 1 hour to reach the island. Piram Bet Island gives us an opportunity to see nature's creations at its best and there is habitation in this virgin island, so one cannot expect to have any kind of facility here. One has to carry all essentials along with them while tripping to this place.

Prior permission has to be taken to visit this place and according to studies, this would be an ideal place for all those who are into environmental studies, archeology, photography, and geography. Besides, it is also an ideal weekend destination for both tourists and locals.