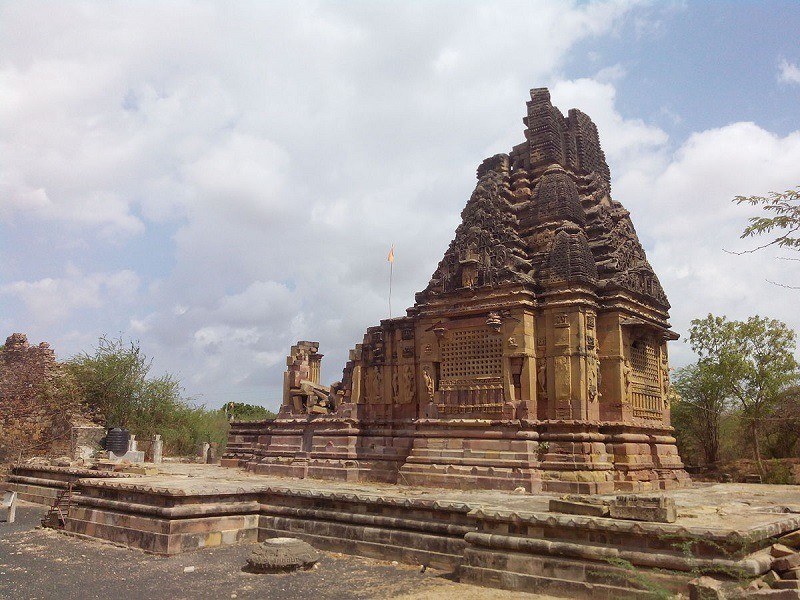 At a distance of 25 km from Bhuj Railway Station, Kera Shiva Temple is an old Hindu temple situated in Kera village near Bhuj city in Gujarat. Also known as Lakheshwara temple of Kerakot, it is one of the ancient temples in Kutch and among the popular Bhuj Tourist Places.

Dedicated to Lord Shiva, Kera Shiva Temple was built during the reign of the Solanki dynasty in the later part of the 10th century. The Solankis, referred to as the 'Chalukyas of Gujarat' were patrons of many important temples in the area. Shiva Temple at Kera is one of the many temples built by the Solanki rulers. The major part of the temple got destroyed in the earthquake of 1819 and the Bhuj earthquake of 2001 but the temple's spire, inner sanctum and the sculptures are still in an attractive condition.

The shrine is built of red stones in Solanki architectural style. The interior of the temple is square in shape and the walls of the temple are around 3 feet thick. The presiding deity is in the form of Linga at the sanctum. The shrine has a pradakshina path with two open cut-stone perforated windows. The spire of the temple has eight triangle-shaped sculptures in the form of chaitya windows on each face of the spire. There are miniature spires at the corners of the temple. The external portions of the spires are well-adorned with elegantly carved images. Only the northern part of the original hall or Mandapa is there as of now which has few well-carved sculptures. Several stone sculptures of Yakshas can be seen around the temple premises. Close to this temple, there is the Fort of Kapilkot, which is also in a dilapidated condition.