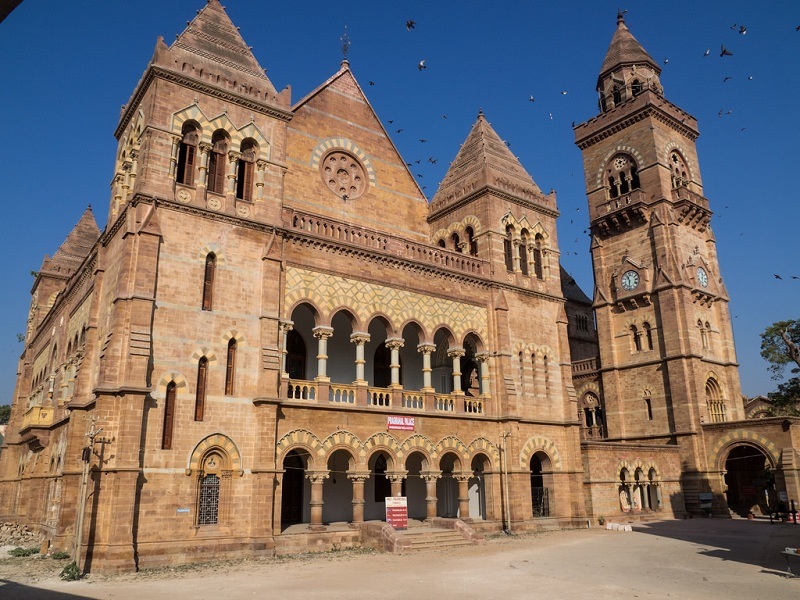 At a distance of 2.5 km from Bhuj Railway Station, Prag Mahal is a 19th century royal palace situated next to the Aina Mahal in Bhuj city of Gujarat, India. Situated in the heart of the city, it is one of the elegant palaces of Bhuj kings and among the popular places to visit during your Bhuj trip.

Prag Mahal is named after Rao Pragmalji II, who commissioned it in 1865. It was designed by Colonel Henry Saint Wilkins in the Italian Gothic style. The construction of the palace was completed in 1879 during the reign of Khengarji III, the son of Rao Pragmalji II and it costs 3.1 million rupees. Many Italian artisans and local mistris were involved in its construction along with Colonel Wilkins.

The palace is made of Italian marble and sandstone from Rajasthan. The grand palace boasts of Gothic-style windows and Corinthian pillars around it. One can observe some intricate carvings done on the walls with beautiful art, along with exquisite jaali work on the jharokhas here. The main hall of the palace has many preserved skins of animals stuffed and mounted on walls in life like form while the Durbar hall has chandeliers and classical statues in it. The opulent Prag Mahal has the second tallest clock tower in the country and one can get an amazing view of Bhuj city from the top. There is a small Hindu temple in the palace premises with nicely carved stonework.

Among the must-visit Bhuj tourist attractions, a part of the palace has been converted into a museum with archives and personal items of the royal family on display. Prag Mahal has also been very famous in Bollywood and has been a part of several Bollywood blockbusters including Lagaan, Hum Dil De Chuke Sanam, and numerous Gujarati films as well. The 2001 Gujarat earthquake severely damaged the palace and the palace was robbed, with thieves stealing antiques worth millions of rupees and damaging other items throughout the palace in 2006. However, the palace and the tower have been repaired and are now open for public viewing. Visitors may enter the main palace halls and ascend the bell tower, which offers views of the city.