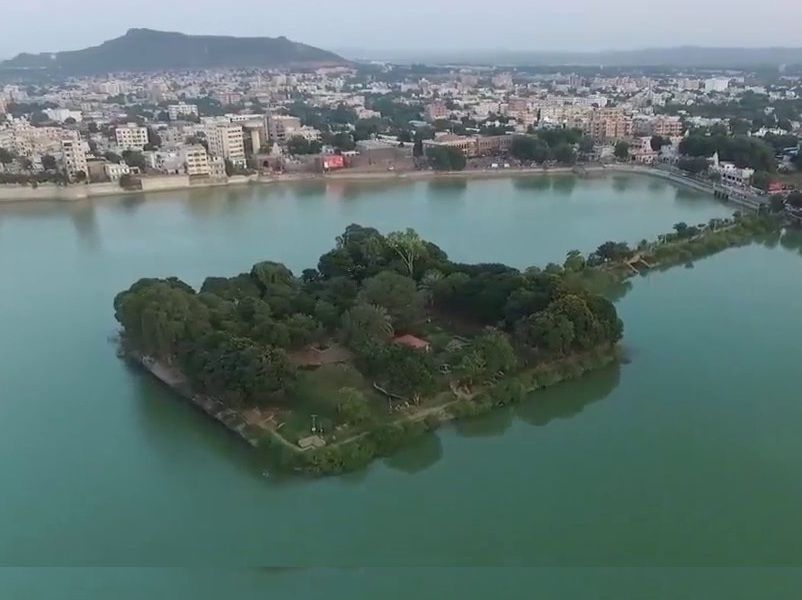 Place Location: In The Heart Of Bhuj

At a distance of 4 km from Bhuj Railway Station, Hamirsar Lake is an artificial lake located in the heart of Bhuj city in Gujarat. It is the largest manmade lake in Kutch region and among the best places to visit in Bhuj.

Named after the founder of Bhuj Rao Hamir, this 450 years old lake was built during the reign of Rao Khengarji I (1548-1585). The embankment of Lake Hamirsar was made during reign of Pragmalji II and further improvements done during the reign of Khengarji III. The primary purpose of the lake was to fulfill the domestic needs of Bhuj in ancient times. Hamirsar Lake was well developed with a channel and tunnels that used to carry water from three rivers to fill the town's water reservoirs. This water system was damaged during the earthquake of 2001 in Gujarat. The municipality and people of Bhuj restored the water system to its original form once again in 2003 and the water of Hamirsar Lake became potable.

The lake is spread over an area of 28 acres and has a beautiful garden in the middle. The garden was earlier called as Green Island now has been renamed as Rajendra Park. Hamirsar Lake is the favourite picnic spot for the people of Bhuj where one can enjoy and relax under the shade of trees. It is also an ideal spot for evening and morning walks. One can enjoy the spectacular view of Aina Mahal, Prag Mahal, Kutch Museum, Ram-kund Step well, Swaminarayan Temple, Sharad Baug Palace and Royal Chhatardis while walking on the lakeside. Visitors can also spot many migratory birds in the lake during winters.

Augun of Hamirsar is a unique festival celebrated in Bhuj when the lake overflows in monsoon. This festival has been followed since the times of ancient kings. The King at that time would perform a Puja when the lake overflowed and sweets were distributed as prasad to the people of Kutch. Puja was done as a thanksgiving to the almighty and to welcome new water into the lake.