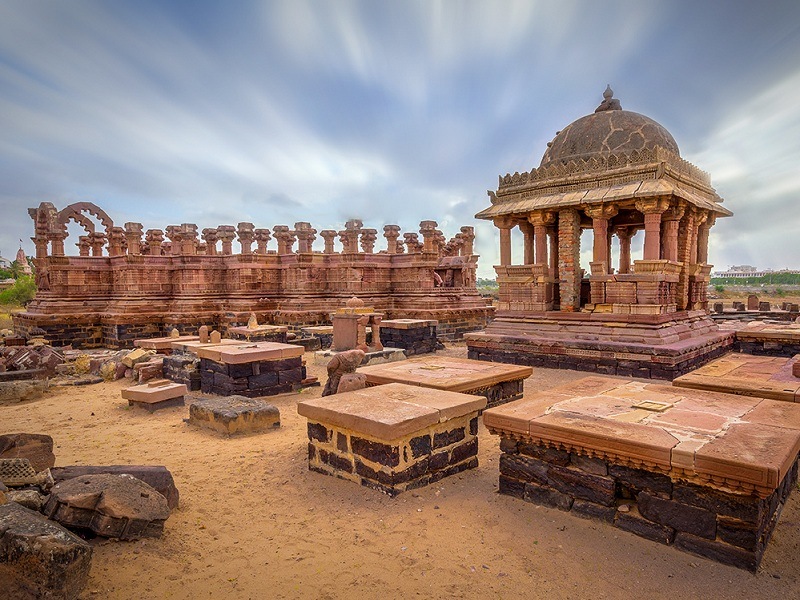 Place Location: To The Southwest Of Hamirsar Lake

At a distance of 4.5 km from Bhuj Railway Station, the Royal Chhatardis of Bhuj are the cenotaphs of Bhuj Royal family situated to the southwest of Hamirsar Lake. Located close to Ranjit Vilas Palace, this place is one of the popular tourist attractions in Kutch.

Also known as Royal Chhatris or Cenotaphs, these are basically monuments dedicated to the lives of warrior Rajput rulers of the Kutch. The Chhatris in Bhuj were constructed in the 18th century by Jadeja ruler Rao Lakhpatji. The structure of these monuments is a unique mix of Rajputana and Mughal architectural styles. These umbrella-shaped dome structures are specimens of fine carvings in red sandstone. Almost all the Chhatardis has curved lines, domes and arches in their structure. The exterior walls are heavily ornamented, with sculptures of deities and panels depicting hunting scenes and couples in local costumes. Besides, the architecture of these structures shows a strong Islamic influence and is evident in the Mughal arches, the geometrical pattern of the jaalis and in the use of turquoise blue on a roof.

Many of the monuments are in ruins due to earthquake in 2001, but those of Lakhpatji, Raydhanji II and Desarji are still quite intact. Of these, the largest and the most outstanding one is the chhatri of Rao Lakha. Designed by Ram Singh Malam, it is polygonal in shape with balconies and a blue dome with jeweled work strongly influenced by Turkish architecture. It has two galleries with two entrances. The depictions in stone of his chhatri suggest that 15 of his wives gave up their lives at his funeral pyre.

Bhuj Chattardi also has a small surrounding lake which is adjoined by city's famous Hamirsar Lake. Watching the sunset from the complex is an amazing and memorable experience. However, some of its parts are damaged in 2001 Earthquake but still it gives you mesmerizing experience when you walk around. Renovation work still continues at these points though at a very slow pace.