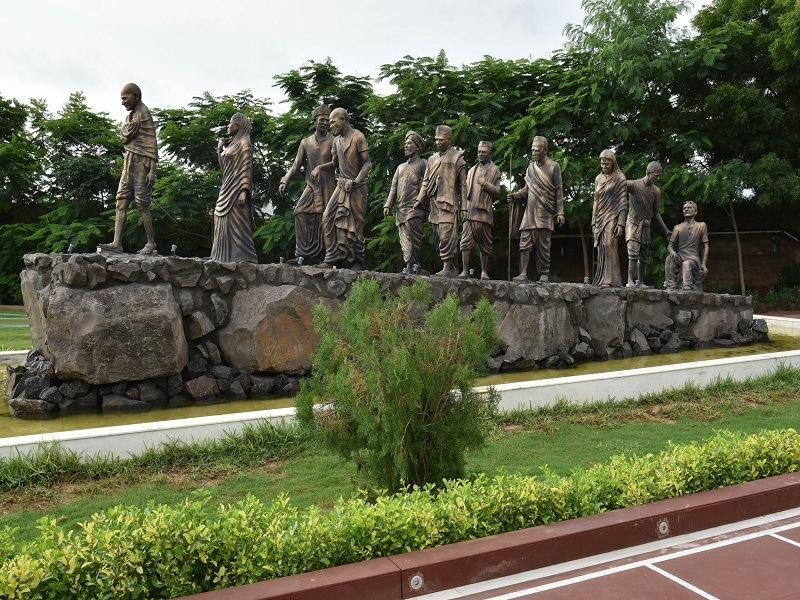 At a distance of 10 km from Bhuj, Vande Mataram Memorial is a museum situated at Bhujodi village near Bhuj in Kutch district of Gujarat. It is one of the popular monuments in Gujarat and among the best place to visit in Gujarat.

The Vande Mataram Memorial is a humble and yet the most ambitious offering of the Ashapura Foundation to the country. Built over an area of 12 acre, the Memorial is a non-profit institution that seeks to immortalize the most important episodes in India's freedom struggle from the revolt of 1857 right up to the country's Independence in 1947. The purpose of this museum is to create a respect for freedom fighters of the country. It is a once-in-lifetime experience for every Indian who is keen to reconnect with his roots and who seeks to renew and restore his sense of national pride.

The primary structure of the museum, measuring over 100,000 square feet, is modeled on the likeness of the Indian Parliament Building. It cost about 60 crores and it takes four years to build with a mélange of inputs from prominent historians, architects, sculptors and artists. The main museum is situated inside the Parliament House, where one will get a glimpse of the peaceful movement of the Swaraj movement, with the slogan of revolution. In the 17 rooms of Parliament House, visitors can see history from 1600 to 1947 through 4D technique in 17 episodes. There is also a magnificent and spacious image of Bharat Mata created in the middle of the hall. A secondary structure of 50,000 sq. ft modeled on Agra Fort, contains a special gallery of freedom fighters from Gujarat, an Auditorium, a library and a food court. One can also see the replica of India Gate, eleven statues of Gandhiji's Dandi march, and a huge statue of Gandhiji.

Besides 'Vande Mataram Memorial', Bhujodi village is also famous for Hiralaxmi Memorial Craft Park, situated inside Vande Mataram Memorial Complex. Spread over 10 acres of land, the craft park is established in 2005 by Mr. Chetan Shah, Managing Director of Ashapura Group. This park was created to preserve and promote the beautiful artwork of Kutch. The artisans are provided with meals, boarding, lodging at free of cost and a daily stipend during their stay at the craft park. There are many small stalls selling beautiful craftwork, done by local craftsmen of Kutch. The park also has a beautiful Radha-Krishna temple and a lotus pond that beautifies the entire ambience. There are electronic rides for the entertainment of the children.

Visitors can also be able to see the Facade show in this park. This 12 minute open air show is a grand show with full of lights and sound effects with the help of high technology projectors.