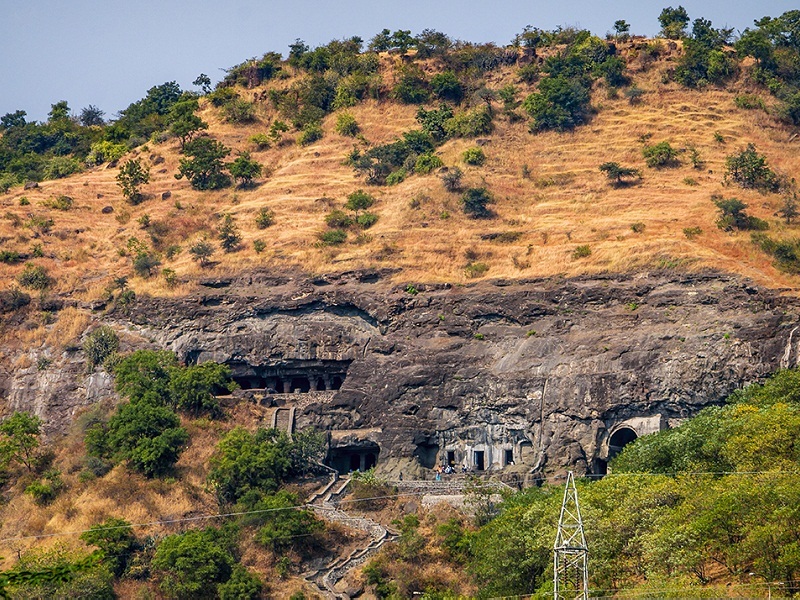 #3 of 13 Places to Visit in Aurangabad

At a distance of 3 km from Bibi Ka Maqbara and 8 km from Aurangabad Railway Station, the Aurangabad Caves are 12 artificial rock-cut Buddhist Caves located on a hill running roughly east to west in Aurangabad. Sculptural carvings of Aurangabad Caves can be compared to the best paintings of Ajanta. These are one of the the popular Aurangabad tourist places.

Cave 1 & Cave 3 are the earliest excavations here and are probably date back to 2nd - 3rd century AD. The first clusters of Caves, also known as Cave 1, are the incomplete set of caves with old-fashioned pillars and obscure ornamentation. Cave 2, a square-shaped shrine resembling traditional temples, has a mammoth image of a seated Buddha. Several other figures of Buddha can also be seen adorned on the walls and the porch. Cave 3 is in the form of a chaitya griha of the Hinayana order, and is believed to be the largest and the most beautiful of all. A large verandah with a huge monastery resembles the interiors and the architecture at Ajanta. The heterogeneous rock formation here has prevented very large scale excavations.

The remaining caves are generally ascribed to the Kalachuri dynasty. Of all, Cave 7 is the most elaborate and famous for its sculptural embellishments. On plan it includes a central shrine with circumambulation with an outer corridor running all around. This corridor has recesses at regular intervals which are carved with various Buddhist gods and goddesses. The front wall of the verandah has very beautiful representation of a panel of litany of Avalokitesvara and Bodhisattva on either side of the entrance to the shrine. The litany of Avalokitesvara is particularly more elaborate from similar examples at Ajanta and Ellora.

The other important sculptural panels are of Tara, the principal consort of Avalokitesvara, depicted to the left of central shrine door and a group of six female musicians on the left wall of the main shrine. The latter is particularly very famous and often taken as the representative sculptural panel of the Aurangabad Caves. The main figure at the center is in a dancing attitude, with the five others playing different musical instruments. The remaining caves of the second group are of less important due to incomplete excavations.