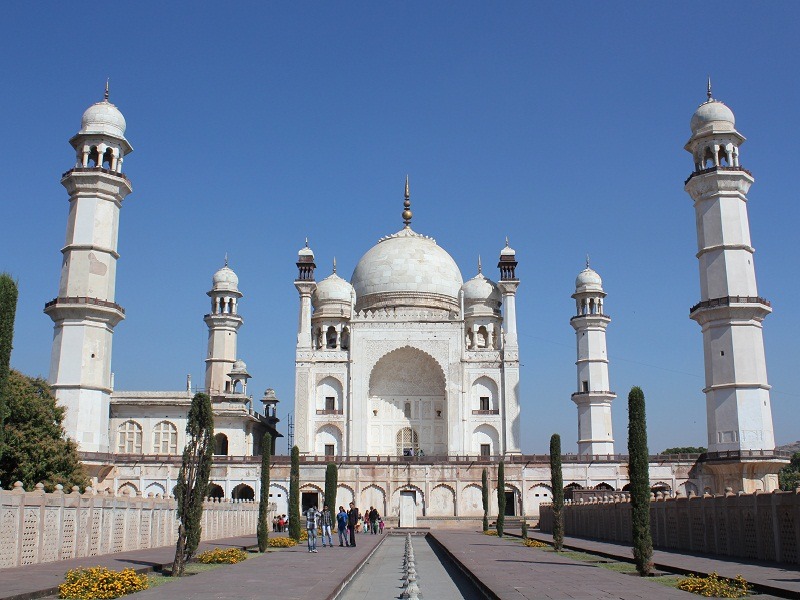 #1 of 13 Places to Visit in Aurangabad

At a distance of 5 km from Aurangabad Railway Station, Bibi Ka Maqbara is a beautiful mausoleum situated in Aurangabad. Maintained by Archeological Survey of India, Bibi Ka Muqbara is one of the top tourist places to visit in Aurangabad.

The Bibi-Ka-Maqbara is dedicated to Rabia-ul-Daurani alias Dilras Banu Begum, the wife of Mughal Emperor Aurangzeb. Aurangzeb's son, Prince Azam Shah built the mausoleum between 1651 AD and 1661 AD in the memory of his mother Begum Rabia Durani. This mausoleum is a replica of the world-famous Taj Mahal. Also known as Mini Taj, the mausoleum is far less ornamental than the Taj Mahal in Agra. It is one of the must include places in Aurangabad tour packages.

An inscription found on the main entrance door mentions that this mausoleum was designed and erected by Ata-Ullah, an architect, and Hanspat Rai, an engineer respectively. The marble for this mausoleum was brought from mines near Jaipur. Despite the layout and surrounding of the tomb is very much similar to the Taj Mahal, somehow the architecture fails to produce the magic of the Taj. Hence, it is considered to be a poor imitation of the Taj Mahal.

The mausoleum is laid out in a Charbagh formal garden. It stands at the center of a huge enclosure measuring approximately 458 m x 275 m and is surrounded by high walls with bastions set at intervals, and open pavilions on three sides. The mausoleum is built on a high square platform with four minarets at its corners, which is approached by a flight of steps from the three sides. A mosque is found to the west of the main structure, a later addition by the Nizam of Hyderabad. The narrow walkway from the main gate has a series of fountains at the center and is flanked by lush green gardens.

Like Taj Mahal, this impressive monument has a central dome, surrounded by four smaller domes. Four small minarets near the main structure while four larger minarets at its corners. The mausoleum is encased with marble up to the dado level. Above the dado level, it is constructed of basaltic trap up to the base of the dome; the latter is again built of marble. A fine plaster covers the basaltic trap and is given a fine polished finish and adorned with fine stucco decorations. The mortal remains of Rabia-ul-Daurani are placed below the ground level surrounded by an octagonal marble screen with exquisite designs, which can be approached by a descending flight of steps. The roof of this chamber that corresponds to the ground level of the mausoleum is pierced by an octagonal opening and given a low barricaded marble screen. Thus the tomb can also be viewed from the ground level through this octagonal opening. The mausoleum is crowned by a dome pierced with trellis works and accompanying panels decorated with flower designs.

MTDC organizes a fair every October at the Bibi Ka Maqbara festival. There is an archaeological museum located just behind the mausoleum, which houses a rare collection of artifacts and articles of personal use from the times of the Mughal era.