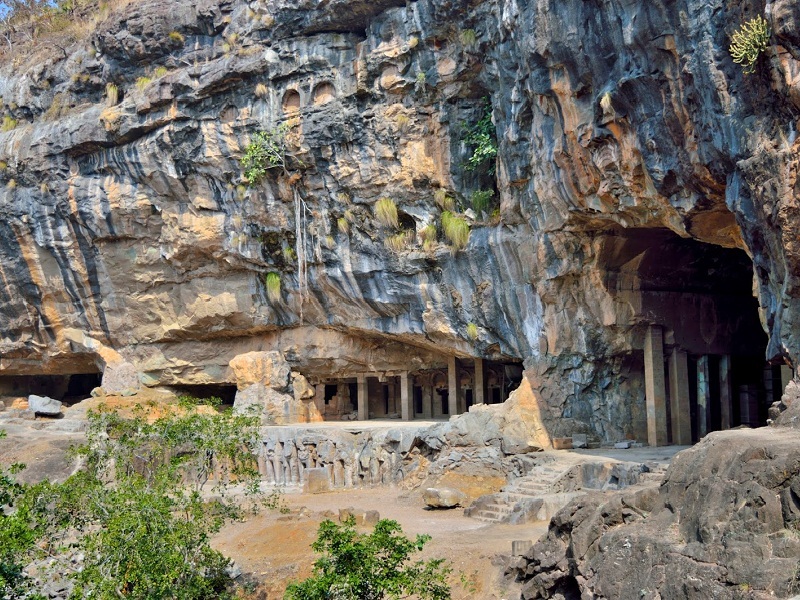 #8 of 13 Places to Visit in Aurangabad

At a distance of 18 km from Kannad and 77 km from Aurangabad, the Pitalkhora Caves are an ancient rock cut caves located on Chandora hill near Ambala village in Aurangabad district of Maharashtra.

Pitalkhora consisting of 14 Buddhist Caves and are believed to be one of the earliest of the rock cut cave structures in the vicinity. It is believed that Pitalkhora Caves belongs to 2nd century BC. They are cut in a variety of basalt rock which weathers faster in contrast to other parts in Maharashtra. All the caves belong to the Hinayana period but the painting executed in the caves are of Mahayana period. The caves boast paintings, many sculptures, animal motifs, miniature chaitya windows, wonderful Yaksha figures, the elephants, dwarapalas and mithuna figures. The sculptural representations here are similar to that of found in the stupas of Sanchi, Karla, Nasik, of the same period.

The caves are in two groups, one is a cluster of 10 caves and the second of 4 caves. Out of the 14, four are chaityas (one housing votive stupas, one apsidal and single-cell) and the rest are viharas. The 1st cave, which has been damaged, was used as a monastery or vihara. The 2nd, 3rd and 4th caves have similar courtyards and seem to belong to the same period.

The Cave 3 has the best paintings and there are 37 pillars that separate the aisle from the hall. The inscriptions on each pillar indicate that they were added individually over a period of time by rulers of Paithan. The original complete pillars demonstrate beautiful painting fragments of the Ajanta style. Many images of standing and seated Buddhas are clearly visible even today. There are steps that lead down to a basement where there are many carvings and a stupa which houses many rare crystals. Cave 4 contains carvings of elephants and horses, also inscriptions left by donors. Cave contains also a carved panel depicting Buddha as a prince who is leaving his palace.

Pittalkhora Caves are located in remote, deep, wild river valley. One has to descend steep steps in deep valley and cross an iron bridge, admiring the beautiful scenery along the path. This area looks especially beautiful during the rainy season, when the stream and waterfalls are full with water and soil is covered with lush greenery.