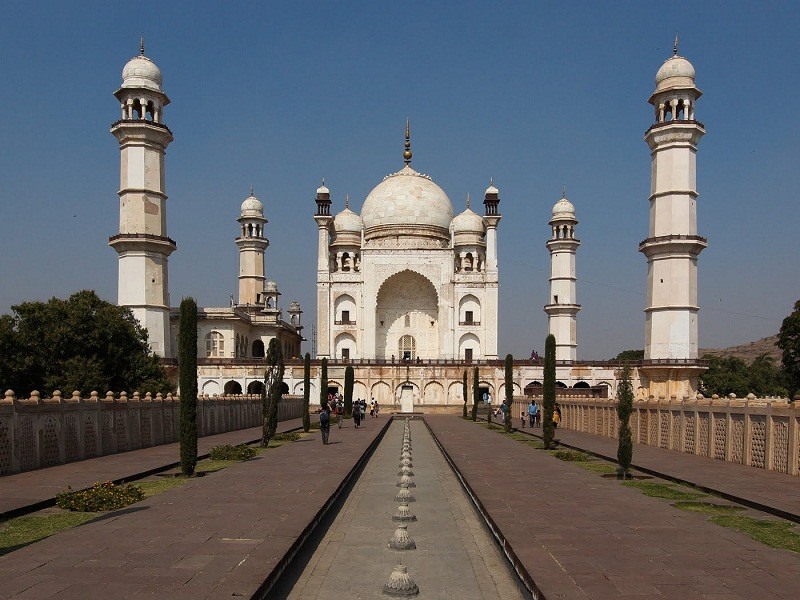 At a distance of 108 km from Shirdi, 181 km from Nashik, 232 km from Pune, 350 km from Mumbai, 482 km from Nagpur, and 534 km from Hyderabad, Aurangabad is a historical city and the administrative headquarters of the Aurangabad Division or Marathwada region in Maharashtra. In 2010, the Maharashtra Tourism Minister declared Aurangabad to be the tourism capital of Maharashtra. It is one of the top places to visit as part of Maharashtra tour packages.

Popularly known as the City of Gates, Aurangabad is among the prominent historical places to visit near Pune. The city was founded in 1610 AD by Malik Ambar, the Prime Minister of Murtaza Nizam Shah of Ahmadnagar and his son Fateh Khan changed the original name Khadki to Fatehnagar. The areas around Aurangabad were under the control of Delhi Sultanates, Bahamani Sultans, Nizam Shahis, Mughals, and Hyderabad Nizams. With the capture of Daulatabad by Mughals in 1633 AD, the Nizam Shahi dominions, including Fatehnagar, came under the possession of the Mughals. In 1653 when Prince Aurangzeb was appointed the viceroy of the Deccan for the second time, he made Fatehnagar his capital and called it Aurangabad. After Aurangzeb, the city became part of the princely state of Hyderabad until 1956 AD when it was merged with the Bombay state and eventually the state of Maharashtra in 1960 AD.

Named after the Mughal emperor, Aurangzeb, Aurangabad is a tourist hub of Maharashtra. The city is surrounded by many historical monuments, including the world-famous Ajanta - Ellora Caves, which are UNESCO World Heritage Sites. Daulatabad Fort, Bibi ka Maqbara, Jama Masjid, Panchakki, and the 52 gates are the important tourist attractions in Aurangabad. There are also several temples, mosques, museums, and even some gardens to explore as part of Aurangabad tour packages.

Aurangabad is well connected by air, rail and road to other parts of country. Aurangabad Airport is the nearest airport which is about 10 km from Aurangabad. It has regular flights from Hyderabad, Mumbai, Pune, and Delhi. Aurangabad Railway Station is directly connected to many parts of the country including major cities like Delhi, Mumbai, Pune, Nagpur, Vijayawada, Shirdi, Okha, Rameshwaram, Nagarsol, Hyderabad, Vizag, Tirupati, Chennai, Amritsar, and Okha. Aurangabad Central Bus Station is the main bus station, which is around 3 km from Aurangabad Railway Station. It is well connected by bus with Pune, Mumbai, Shirdi, Nashik, Hyderabad, Bangalore, Goa, and Nagpur.

The best time to visit Aurangabad is from October to March while the peak season is from November to February.

How to Reach Aurangabad - Full Details

Top 10 Places to Visit in Aurangabad

#1 of 13 Places to Visit in Aurangabad

At a distance of 5 km from Aurangabad Railway Station, Bibi Ka Maqbara is a beautiful mausoleum situated in Aurangabad. Maintained by Archeological Survey of India, Bibi Ka Muqbara is one of the top tourist places to visit in Aurangabad.

The Bibi-Ka-Maqbara is dedicated to Rabia-ul-Daurani alias Dilras Banu Begum, the wife of Mughal Emperor Aurangzeb. Aurangzeb's son, Prince Azam Shah built the mausoleum between 1651 AD and 1661 AD in the memory of his mother Begum Rabia Durani. This mausoleum is a replica of the world-famous Taj Mahal. Also known as Mini Taj, the mausoleum is far less ornamental than the Taj Mahal in Agra. It is one of the must include places in Aurangabad tour packages.

An inscription found on the main entrance door mentions that this mausoleum was designed and erected by Ata-Ullah, an architect, and Hanspat Rai, an engineer .....

#2 of 13 Places to Visit in Aurangabad

The historical triangular fort of Daulatabad was built by Yadava king Bhillama V in 1187 AD. It is one of the best historical places near Pune. The city was then called 'Deogiri', meaning the hill of gods. Daulatabad or 'the abode of wealth' was the name given by Muhammad-bin-Tughlaq when he made his capital here in 1327 AD. The region and the fort passed on into the hands of Bahamani rulers under Hasan Gangu in 1347 AD and Nizam Shahis of Ahmednagar in 1499 AD. Daulatabad became the capital of the Nizam Shahi dynasty in 1607 AD. The .....

#3 of 13 Places to Visit in Aurangabad

At a distance of 3 km from Bibi Ka Maqbara and 8 km from Aurangabad Railway Station, the Aurangabad Caves are 12 artificial rock-cut Buddhist Caves located on a hill running roughly east to west in Aurangabad. Sculptural carvings of Aurangabad Caves can be compared to the best paintings of Ajanta. These are one of the the popular Aurangabad tourist places.

The first reference to the Aurangabad Caves is in the great chaitya of Kanheri Caves. The caves are datable from circa 2nd - 3rd century AD to 7th century AD. Aurangabad Caves are among the best heritage places to visit near Mumbai. These caves were dug out of comparatively soft basalt rock during the 6th and 7th century. The caves are divided into three separate groups depending on their location. The first group of caves consists of cave number 1, 2, 3, 4 and 5, the second group comprises of cave number 6, 7, 8 and 9, while the .....

#4 of 13 Places to Visit in Aurangabad

At a distance of 28 km from Aurangabad, 98 km from Ajanta Caves, 104 km from Shirdi, 176 km from Nashik, 253 km from Pune, and 344 km from Mumbai, Ellora Caves are ancient historical caves located at Verul near Aurangabad in Maharashtra. Ellora is the most visited monuments of heritage in India, and among the top tourist places in Maharashtra.

Locally known as 'Verul Leni', these caves are were designated a UNESCO World Heritage Site in 1983. Ellora is one of the top places to visit near Aurangabad. The caves at Ellora were carved out of the vertical face of the Charanandri hills between the 6th and 10th centuries AD. The carving work began around 550 AD, about the same time the Ajanta Caves were abandoned. Kailash Temple (Cave16), which is the most remarkable structure that can be visited .....

#5 of 13 Places to Visit in Aurangabad

At a distance of 1 km from Ellora Caves, and 29 km from Aurangabad, Grishneshwar or Ghrushneshwar Jyotirlinga Temple is a famous Hindu temple located at Verul village in the Aurangabad district of Maharashtra. It is one of the famous places of pilgrimage in Maharashtra, among the must-visit places as part of Ellora tour packages.


Dedicated to Lord Shiva, Grishneshwar Temple is believed to be the last or 12th Jyotirlinga on the earth. This is one of the top places to visit in Ellora, and among the prominent pilgrimage places to visit near Aurangabad. The presiding deity, in the form of Jyotirlinga, is known by several names like Kusumeswarar, Ghushmeswara, Ghrushmeswara, and Grishneswara. The Grishneshwar temple was re-constructed by .....

#6 of 13 Places to Visit in Aurangabad

At a distance of 25 km from Hingoli, 61 km from Nanded, and 204 km from Aurangabad, Aundha Nagnath Temple is an ancient Hindu temple located at Aundha Nagnath in the Hingoli district of Maharashtra, India. This is one of the top places of pilgrimage in Maharashtra, and among the best places to visit near Aurangabad.

Aundha Nagnath Temple is dedicated to Lord Shiva and is considered one of the 12 holy Jyotirlinga shrines in India. The other Jyotirlinga shrines in Maharashtra are Vaidyanath near Parli, Trimbakeshwara near Nashik, Grishneshwar near Aurangabad, and Bhimshankar. Also, the temple is very closely associated with the lives of saints like Visoba Khechara, Namdev, and Jnanesvar. Namdev went to Jnanesvar temple where he was instructed to visit Aundha Nagnath Temple to search for a proper guru.

The present temple is said to have been built by the Seuna (Yadava) dynasty and dates to the 13th century. It is believed that Dharmraj .....

#7 of 13 Places to Visit in Aurangabad

At a distance of 60 km from Latur, 105 km from Nanded, 119 km from Aundha, and 219 km from Aurangabad, Sri Vaijnath Temple is an ancient Hindu temple, located at Parli Vaijnath in the Beed district of Maharashtra, India. This is one of the top places of pilgrimage in Maharashtra, and among the best places to visit near Aurangabad.

Aundha Nagnath Temple is dedicated to Lord Shiva and is considered one of the 12 holy Jyotirlinga shrines in India. The other Jyotirlinga shrines in Maharashtra are Aundha Naganath near Hingoli, Trimbakeshwara near Nashik, Grishneshwar near Aurangabad, and Bhimshankar. While the exact date of the building of the temple is not known, experts feel that it belongs to the Yadava period that goes back to the 12th or 13th century CE. There are records stating that the temple was renovated by Ahalyadevi Holkar in the year 1706.

There are many legends associated with this temple. One such is the story of Satyavan .....

#8 of 13 Places to Visit in Aurangabad

At a distance of 18 km from Kannad and 77 km from Aurangabad, the Pitalkhora Caves are an ancient rock cut caves located on Chandora hill near Ambala village in Aurangabad district of Maharashtra.

Pitalkhora consisting of 14 Buddhist Caves and are believed to be one of the earliest of the rock cut cave structures in the vicinity. It is believed that Pitalkhora Caves belongs to 2nd century BC. They are cut in a variety of basalt rock which weathers faster in contrast to other parts in Maharashtra. All the caves belong to the Hinayana period but the painting executed in the caves are of Mahayana period. The caves boast paintings, many sculptures, animal motifs, miniature chaitya windows, wonderful Yaksha figures, the elephants, dwarapalas and mithuna figures. The sculptural representations here are similar to that of found in the stupas of Sanchi, Karla, Nasik, of the same period.

#9 of 13 Places to Visit in Aurangabad

At a distance of 2 km from Bibi Ka Maqbara and 4 km from Aurangabad Railway Station, Panchakki is a water mill located in the complex of Baba Shah Musafir Dargah of Aurangabad.

Also called as Nehar-e-Panchakki, Panchakki was built in the early years of the 17th century by Baba Shah Musafir. Comprising of the medieval Indian architecture, the water mill runs on scientific principles. Setup with an aim to generate electricity from water brought down from a spring, the Panchakki water-mill was used to grind grains for the pilgrims who visited the Dargah.

The source of continuous water supply to the mill is an underground stream which begins from a well above the Harsul River with a tributary stream. The water flows down through clay pipes based on the Siphon System. The water on reaching the Panchakki reservoir is made to drop from a height to generate electricity and run the mill, and eventually the excess water is put in .....

At a distance of 3 km from Aurangabad Railway Station and 4 km from Bibi Ka Maqbara, Siddharth Garden is a sprawling garden, park and zoo together situated at Samarth Nagar in Aurangabad City. This is one of the popular picnic spots in Aurangabad and is mostly crowded on evenings especially on weekends.

Siddharth Garden is a landscaped garden spread over a large area and it has a green outlook. The garden has 2 parts - one a garden with lawns and another one is a small zoo. The garden also has a small aquarium, though the major attraction of the tourist is the Siddharth Garden Zoo. The zoo is the abode of a number of wild animals like tigers, lions, leopards, Civet cats, snakes (snake house), crocodiles, emu, fox, deer, hyena, etc. It was quite an enjoyable visit with the children. A musical fountain and statue of Buddha are also adorning this park.

Garden Timings: 10 AM to 7 PM on all days except on Tuesdays.