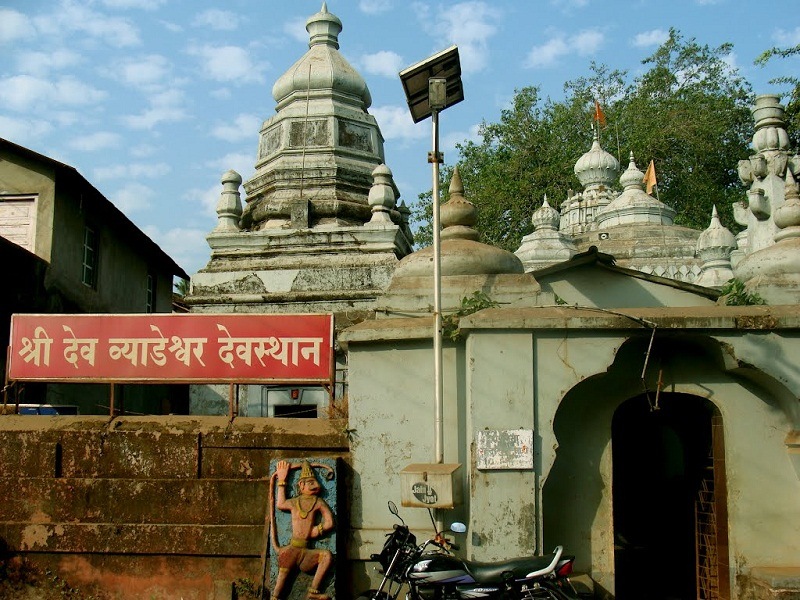 #7 of 12 Places to Visit in Ganpatipule

At a distance of 79 km from Ganpatipule and 46 km from Chiplun, Sri Vyadeshwar Temple is an ancient temple located at Guhagar in Maharashtra. It is considered to be the Kuladevata or clan god of many Chitpavan families from Konkan region.

Vyadeshwar Temple is dedicated to Lord Shiva which is located near Guhagar Beach and is the most prominent temple in Guhagar. According to the history of this temple, Lord Parshurama requested Lord Shiva to visit Konkan land everyday so that he can see him. Lord Shiva accepted his request. Lord Parshuram also brought 60 Vipras to settle in Kokan. One such Vipra named Vyad installed a Shivlinga at Guhagar.

After Sriramavatar and Srikrishnavtar, Lord Vishnu came with his Kalki manifestation. In this era, since evil thoughts are supposed to prevail, Gods are to remain in their invisible forms. Accordingly Lord Shiva decided to remain in invisible form in the Vyad Shivlinga. The same Shivlinga is this well-known Vyadeshwar Mahadev. According to another myth, King Sakuran was re-invented the Vyad Shivlinga and the temple was constructed.

The temple is made in Panchayatan style with four sub shrines present in all four corners. Here, the main shrine at the center is of Sri Vyadeshwar and the surrounding deities are Lord Ganesha, goddesses Parvati, Lord Vishnu and Sun. A statue of Nandi is located in front of main shrine. All statues are made of marble. Vyadeshwar Temple has three entrances-East, West and South corners. The temple is famous for a huge fair organised during the festival of Mahashivratri.