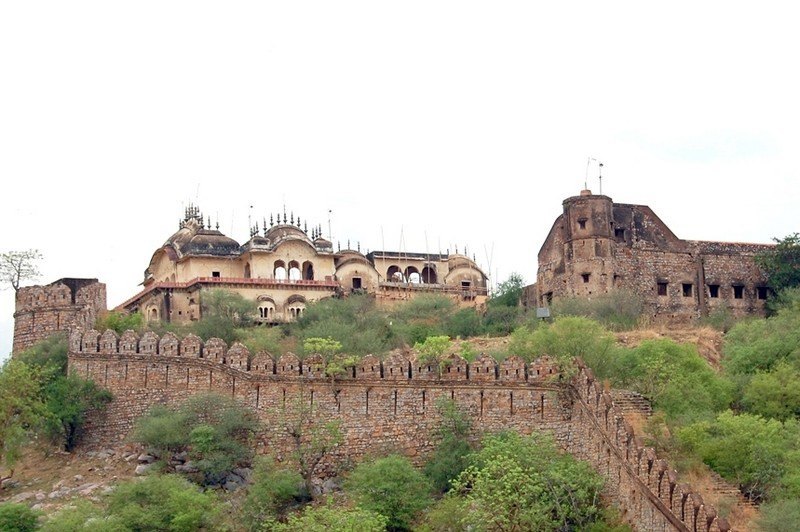 At a distance of 10.5 km from Alwar Jn Railway Station, Bala Quila also known as Alwar Fort is an ancient fort situated in Alwar town of Rajasthan. Situated on a hill in the Aravalli Range, it is one of the famous places of heritage in Rajasthan, and among the must include places in Alwar holiday packages.

Bala Quila meaning the young fort, and is the oldest structure in the entire town of Alwar. It was built by Hasan Khan Mewati in 1550 AD. In the following centuries, it went into the hands of Mughals, Marathas, Jats, and Kachwaha Rajputs. Babur, the Mughal emperor had spent a night here and also taken away a sizeable amount of treasure to gift his son Humayun. Later Jahangir stayed there for some time when he was banished by his father, Akbar for planning to kill one of his courtesans Abul Fazal. The place where he stayed came to be called Salim Mahal. In 1775 AD, Kachwaha Rajput Pratap Singh captured it and laid the foundation of Alwar city.

The fort is 5 km long and is about 1.5 km wide. The Fort has 6 gates, namely Jai Pol, Laxman Pol, Suraj Pol, Chand Pol, Andheri Gate, and Krishna Gate. The fort has 15 large and 51 small towers, which are surrounded by 8 enormous citadels. Built-in a typical Indo - Islamic style of architecture, the walls of Bala Quila are adorned with beautifully crafted ancient sculptures and scriptures. The fort also houses many other stunning structures such as Nikumbha Mahal Palace, Suraj Kund, Salim Sagar Pond, Jal Mahal, and 15 striking temples including Chakradhari Hanuman Temple and Sita Ram Temple. Surrounded by the majestic Aravalli Hills, each structure inside the fort represents the opulence of the bygone era, especially the Nikumbha Mahal Palace, which is built using Bengal caned marble pillars along with large latticed balconies. It is one of the most prominent Alwar tourist places.

Bala Quila is now in dilapidated condition and houses the radio transmitter station. One can still see the huge gates, arches, and battlements.