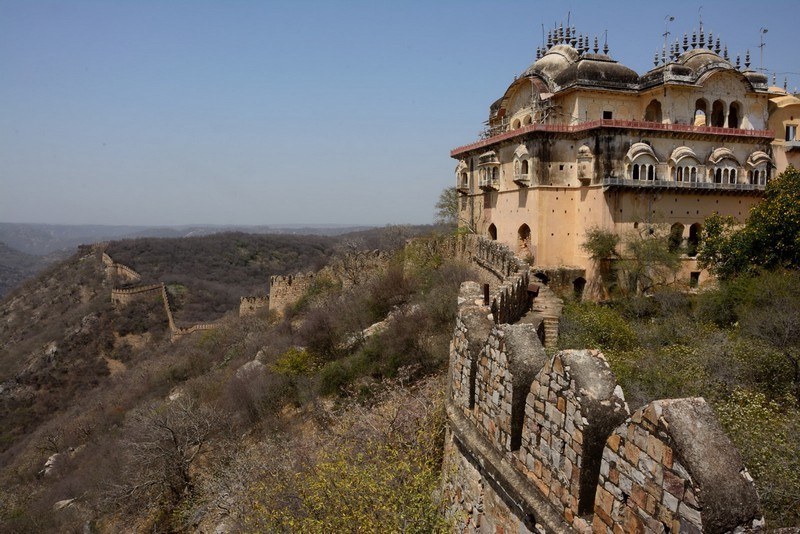 At a distance of 148 km from Jaipur, 160 km from Delhi, 117 km from Mathura, and 172 km from Agra, Alwar is a city and administrative headquarters of Alwar district in the state of Rajasthan. Alwar is part of the National Capital Region (NCR) and also famous for its Olive plantation in Tinkirudi. It is one of the popular tourist places near Delhi and also one of the best places to visit in Rajasthan.

Alwar is situated between small hills of the Aravali range and has great historical importance. It was founded in 1049 by Maharaja Alaghraj. A Rajput state for a long time, Alwar eventually fell into the hands of Delhi Sultans in the early 13th century. Marathas and Jats of Bharatpur also ruled this region for a very short period. Rao Partap Singh, a Rajput prince took the Alwar Fort from Jat Raja of Bharatpur and laid down the foundation for modern Alwar. Alwar is among the must include places in your Jaipur tour packages.

Maharaja Pratap Singh, a Kachwaha Rajput belonging to the clan of Jaipur's rulers, won Alwar back and founded a state of his own in 1771 AD. Alwar gained the reputation as a remarkable seat of art and culture under the patronage of Maharaja Pratap Singh. In the 18th century, Pratap Singh evicted the rulers of Jaipur to the south and the Jats of Bharatpur to the east, and successfully resisted the invasion of Marathas. Like all the princely states, this stronghold of the Rajputs also came under British rule and remained until India gained independence.

Samrat Hem Chandra Vikramaditya, popularly known as Hemu was born in this district, in a village called Maccheri Devat in 1501. He won 22 battles against the Afghans. The coronation of King Hemu was done at Purana Quila in Delhi. He was killed while fighting with the Mughals in the Second battle of Panipat.

Alwar is one of the most frequented tourist destinations in Rajasthan. The best time to visit Alwar is from September to February.

How to Reach Alwar - Full Details

Top 10 Places to Visit in Alwar

At a distance of 10.5 km from Alwar Jn Railway Station, Bala Quila also known as Alwar Fort is an ancient fort situated in Alwar town of Rajasthan. Situated on a hill in the Aravalli Range, it is one of the famous places of heritage in Rajasthan, and among the must include places in Alwar holiday packages.

Bala Quila meaning the young fort, and is the oldest structure in the entire town of Alwar. It was built by Hasan Khan Mewati in 1550 AD. In the following centuries, it went into the hands of Mughals, Marathas, Jats, and Kachwaha Rajputs. Babur, the Mughal emperor had spent a night here and also taken away a sizeable amount of treasure to gift his son Humayun. Later Jahangir stayed there for some time when he was banished by his father, Akbar for planning to kill one of his courtesans Abul Fazal. The place where he stayed came to be called Salim Mahal. In 1775 AD, Kachwaha Rajput .....

At a distance of 3.5 km from Alwar Jn Railway Station, City Palace is situated in the foothills of Aravalli, right below Bala Quila in Alwar.

The City Palace was built by Raja Bakhtayar Singh in the year 1793. The building is a perfect blend of Mughal and Rajput architecture. The architecture of the city palace consists of marble pavilions with lotus shaped designs in the large central courtyard. An elevated door shaped pavilion is built within the Vinay Vilas Mahal, which depicts the pride and honor of Rajput kingdoms.

This palace is a two storey building which is now taken up by Government for different offices on the ground floor and the Alwar Government Museum on the floor above. On display in the museum are some ancient Mughal and Rajput painting dating back to the 18th and 19th centuries. The museum has a rich collection of some rare and antique Persian, Arabic, Urdu and Sanskrit manuscripts. Amongst these manuscripts, the most prominent ones include Bostan, Waqiat-e-Babri .....

At a distance of 16 km from Alwar Junction Railway Station, Siliserh Lake and Palace is situated on Alwar - Sariska road. Siliserh Lake Palace was built by Maharaja Vinay Singh of Alwar in 1845 for her beloved wife Sila. The lake and reservoir created by Maharaja was the main source of water for the city of Alwar.

The beautiful Siliserh Lake near the Palace stretches over an area of 10.5 square kilometers and forms the backdrop of Siliserh Palace, which has presently been converted into a heritage hotel. The Siliserh Lake has a number of domed cenotaphs and it is circumscribed by the magnificent slopes of the Aravalli range. Two earthen dams have been constructed in order to collect the waters of a small tributary of River Ruparel in the Lake.

The location of Siliserh Lake is picturesque and it is home to a large number of migratory birds. The serene lake is visited by large number of tourists for boating, sailing and fishing. There are different kinds of boats available here. .....

At a distance of 36 km from Alwar, 111 km from Jaipur & 195 km from New Delhi, Sariska Tiger Reserve is a popular national park and wildlife refuge located at Sariska in the Alwar district of Rajasthan. It is one of the best national parks near Delhi, among the popular Alwar places to visit.

Sariska Tiger Reserve is one of the prominent national parks in India. Formerly a hunting ground of the Maharaja of Alwar, the park was declared as a wildlife reserve in 1955 and then a Tiger Reserve in 1978 under Project Tiger. Sariska is among the 28 Tiger reserves in the country and it is spread across an area of 850 sq. km with a core area of approximately 500 sq. km. Sariska has a varied topography that includes grasslands, dry deciduous forests, cliffs, and rocky landscapes. The Aravalli .....

At a distance of 75 km from Jaipur, 87 km from Alwar & 247 km from New Delhi, Bhangarh Fort is one of the medieval forts of Rajasthan located in Bhangarh town of Alwar district.

The town of Bhangarh was established in 1573 during the rule of Bhagwant Das. The Bhangarh fort was built in 1613 by Madho Singh, who was the son of Man Singh of Amber, a great Mughal General. The fort is considered to be one of the most haunted places in India. Because of the numerous ghostly experiences and happenings in the fort premises, villages have sprung up far away from the fort. The Archaeological Survey of India has forbidden the locals and tourists from entering the fort at night.

The fort and the town of Bhangarh are believed to be haunted since many centuries. There are several legends associated with the palace. According to one story, the town was cursed by a magician Guru Balu Nath who had sanctioned the construction of the town on one condition that the city will be destroyed the .....

At a distance of 72 km from Alwar, 147 km from Jaipur and 121 km from New Delhi, Neemrana is an ancient historical town located on Delhi - Jaipur highway in Alwar district in Rajasthan. It is situated between Behror and Shahjahanpur and is among popular tourist places to visit near Delhi, Jaipur, Noida & Gurgaon for a day trip.

Neemrana town is famous for its magnificent Neemrana Fort Palace. It was built in 1464 AD, occupied by Chauhans till 1947. Neemrana became the third capital of the descendants of Prithviraj Chauhan III. Neemrana derived its name from a brave local chieftain Nimola Meo, who when defeated by the Chauhans, pleaded that his name be given to his lost kingdom. It was subsequently conquered by the Mughals and the Jats before reverting back to the Rajputs in 1775 when the princely state of Alwar was established.

Neemrana Fort Palace is located on a high hillock and .....

At a distance of 10 km from Alwar Junction Railway Station, Vijay Mandir Palace is situated in the outskirts of Alwar, Rajasthan.

Maharaja Jai Singh built the Vijay Mandir Palace in 1918. According to the popular folklore, Maharaja Jai Singh was a patron of art and architecture and had a passion for beautiful palaces. He built Yaswant Niwas during his reign which was built in the Italian style of architecture. However, displeased at the outcome of the palace, the king ordered for the Vijay Mandir Palace to be built in the city.

At a distance of 14 km from Alwar Jn Railway Station, Hill Fort of Kesroli is located in Alwar, Rajasthan.

The Fort was built in the 14th century by the Yaduvanshi Rajputs, who are said to be descendants of Lord Krishna. The seven-turreted fort has changed hands many times. It has been conquered by the Mughals and the Jats and then finally came into the hands of the Rajputs in 1775, when the princely state of Alwar was founded. The fort has seen a golden period under Ranawat Thakur Bhawani Singh (1882-1934).

Situated atop the rare, dark Breccia rocks, it commands splendid views from its ramparts which rise to 50-65 m. It is now a heritage hotel owned by Neemrana Hotels group. It is known for its turrets, ramparts, and arched verandahs.