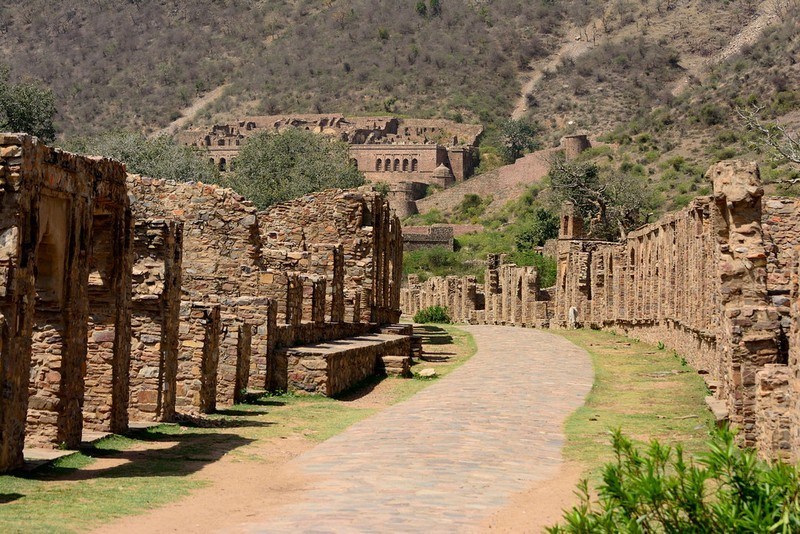 At a distance of 75 km from Jaipur, 87 km from Alwar & 247 km from New Delhi, Bhangarh Fort is one of the medieval forts of Rajasthan located in Bhangarh town of Alwar district.

The town of Bhangarh was established in 1573 during the rule of Bhagwant Das. The Bhangarh fort was built in 1613 by Madho Singh, who was the son of Man Singh of Amber, a great Mughal General. The fort is considered to be one of the most haunted places in India. Because of the numerous ghostly experiences and happenings in the fort premises, villages have sprung up far away from the fort. The Archaeological Survey of India has forbidden the locals and tourists from entering the fort at night.

The fort and the town of Bhangarh are believed to be haunted since many centuries. There are several legends associated with the palace. According to one story, the town was cursed by a magician Guru Balu Nath who had sanctioned the construction of the town on one condition that the city will be destroyed the moment the shadow of the palaces touch him. In ignorance, Ajab Singh, son of Madho Singh, raised the height of the palace, causing the devastation of Bhangarh. Balu Nath is said to be buried there to this day in a small Samadhi. As per another story, a tantrik who fell in love with Princess of Bhangarh, Ratnavati, cursed that the whole area be destroyed.

Bhangarh Fort, now in ruins, is surrounded by a ruined wall. It has four gates namely Lahori Gate, Ajmeri Gate, Phulbari Gate and Delhi Gate. Inside the fort, there is a Dancer's Haveli and Jauhari Bazar. Natural springs, waterfalls, gardens, havelis, banyan trees and temples of Lord Someshwar, Gopinath, Mangala Devi and Keshava Rai can also be found in the fort. There is also a secluded chhatri, atop an elevated hill that overlooks the town and fort of Bhangarh.

The Archeological Survey of India has put up a board on the fort gate that it is prohibited for tourists to stay inside the fort area after sunset and before sunrise.