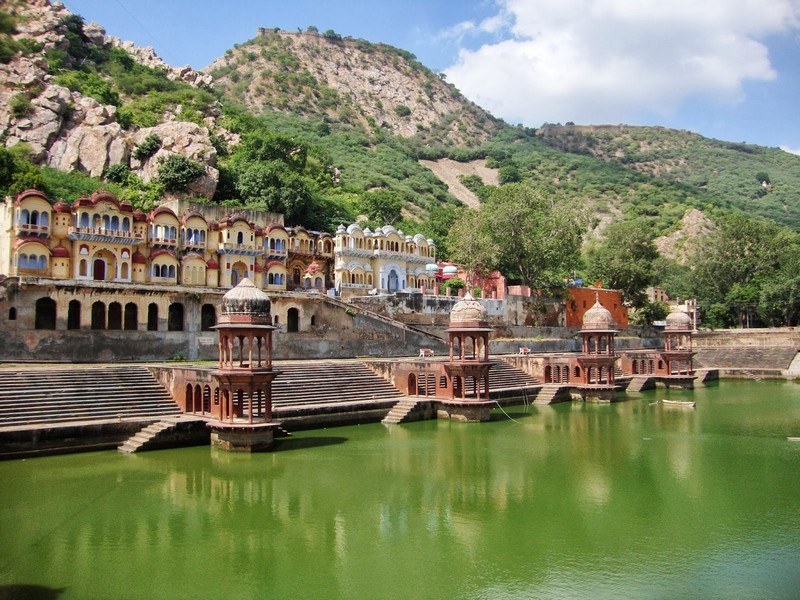 At a distance of 3.5 km from Alwar Jn Railway Station, City Palace is situated in the foothills of Aravalli, right below Bala Quila in Alwar.

The City Palace was built by Raja Bakhtayar Singh in the year 1793. The building is a perfect blend of Mughal and Rajput architecture. The architecture of the city palace consists of marble pavilions with lotus shaped designs in the large central courtyard. An elevated door shaped pavilion is built within the Vinay Vilas Mahal, which depicts the pride and honor of Rajput kingdoms.

This palace is a two storey building which is now taken up by Government for different offices on the ground floor and the Alwar Government Museum on the floor above. On display in the museum are some ancient Mughal and Rajput painting dating back to the 18th and 19th centuries. The museum has a rich collection of some rare and antique Persian, Arabic, Urdu and Sanskrit manuscripts. Amongst these manuscripts, the most prominent ones include Bostan, Waqiat-e-Babri and Gulistan. Other attractions of the museum consist of an array of Indian armory weapons and a copy of Mahabharata, painted by Alwar artists.

There is an artificial lake within the vicinity of City Palace, which was built by Maharaja Vinay Singh in 1815. There are also a number of temples on the banks of the lake. The striking construction inside the palace is the chhatri (cenotaph) that has a Bengali styled roof and arches. This is known as Moosi Maharani Ki chhatri. Within this chhatri a beautiful garden had been setup. This garden is known as Purjan Vihar. It was built in 1868 by Maharaja Shiv Dan Singh. It was further beautified by Maharaja Mangal Singh in 1885. This garden is an ideal picnic spot in summers providing lush green surrounding & numerous trees.

Entry Fee: Rs.5 for Indians and Rs.50 for Foreigners.