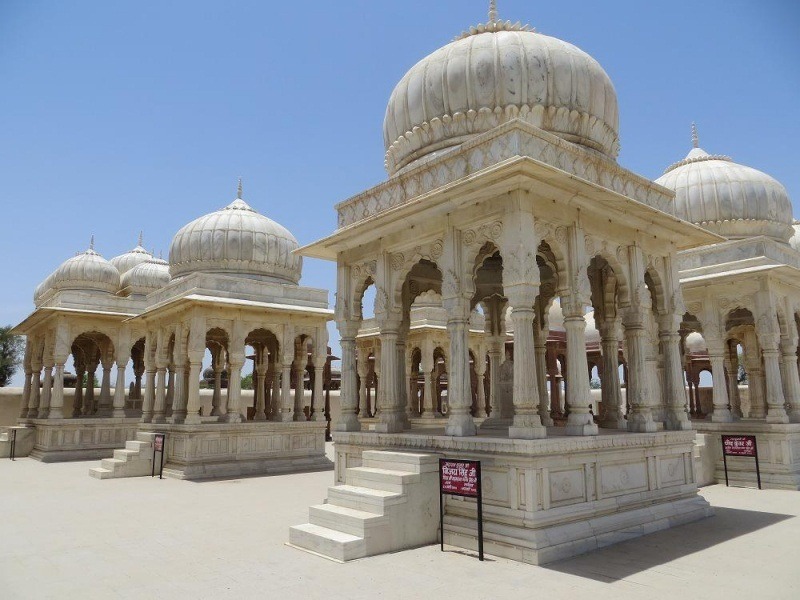 Place Location: In The Outskirts Of Bikaner

At a distance of 9 km from Bikaner Junction Railway Station, Devi Kund Sagar is the cremation ground of Bikaner Royal family situated in the outskirts of Bikaner. It is one of the famous places to visit during Bikaner Trip.

Devi Kund consists of several royal cenotaphs or chhatris of brave rulers of Bika dynasty. It has two groups of cenotaphs built in the memory of kings, queens and members of the Bikaner royal family. The earliest cenotaph is of Rao Kalyanmal, the 5th ruler of Bikaner (1542 - 71 AD) and the last cenotaph is of Maharaja Karni Singh (1950 - 88 AD).

The chhatris are flanked on two sides along a reservoir and is indeed one of the best examples of Rajputana architectural style. The cenotaphs of the earlier rulers of Bikaner are in Dulmera red stone and the later ones are made of marble. The chhatris for women, men and children of the royal family are different. The chhatri of a male has a vertical memorial slab where as that of a female has foot marks engraved on the slab. A memorial erected for a minor is called nada and it is a simple structure without a canopy.

Among these memorials, the cenotaph of Maharaja Anup Singh (1669-98 AD) is a marvelous piece of art and architecture. It stands on 16 pillars and bears carvings depicting acts of Lord Krishna, floral patterns, peacocks and other birds and animals. The tradition of painting the cenotaphs began with Maharaja Ratan Singh and the same is evident in his cenotaph. Devi Kund also has cenotaphs of 22 female members of the royal family prior to Maharaja Gaj Sigh Ji, who committed sati. There is also one cenotaph of a Sata (male sati) of a ruler. Maharaja Surat Singh's Chhatri is built entirely in white marble with spectacular Rajput paintings on its ceiling. Some of the cenotaphs also have epigraphic memorial stones.

Entry Fee: Rs. 5 for Indians and Rs. 10 for Foreigners