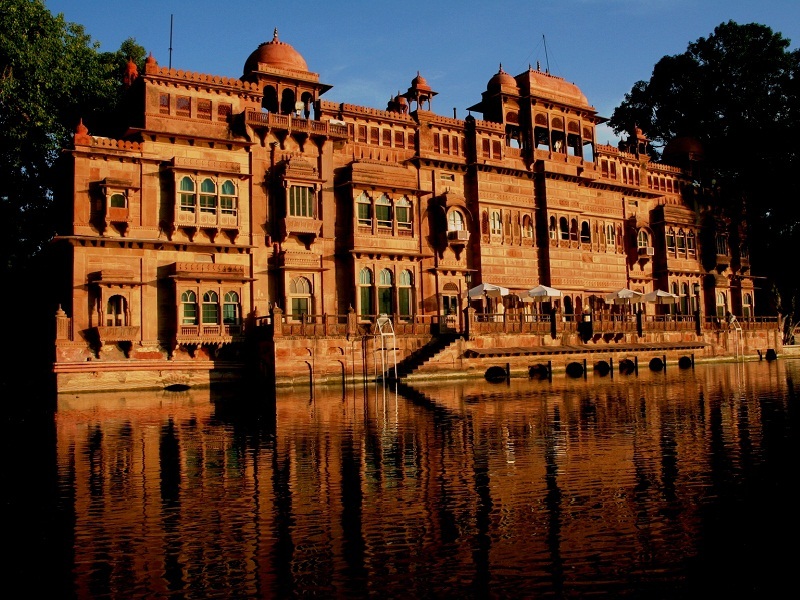 At a distance of 34 km from Bikaner, Gajner Palace is a hunting lodge of Bikaner rulers situated on the banks of Gajner Lake, Bikaner. Situated in the middle of Thar Desert, Gajner Palace is among the top tourist places in Rajasthan and also one of the top places to visit in Bikaner.

The Gajner Palace was primarily built as a hunting resort during the days of the British Raj by erstwhile ruler of the Bikaner, Maharaja Ganga Singh Ji. The royal mansion has hosted several dignitaries, including the Prince of Wales in 1905, Governor General Lord Elgin, Lord Erwin in 1927 and also Lord Mountbatten when he was Viceroy of India. The Imperial Sand Grouse shooting at the Palace during the Christmas season was the most sought after invitation in the Indian social calendar.

Sprawls over 6000 acres, Gajner Palace is a heritage property which features a lush green garden. It was built in red sandstone and is a perfect illustration of craftsmanship. The palace is known for its distinctive terraces and balconies. The Palace complex also has the remnants of a historic railway station. This hunting resort was connected to Bikaner Palace by rail in 1922 CE.

Gajner Palace has been transformed into a stunning heritage hotel in 1976 and is currently owned by HRH Group of Hotels. Gajner Palace is divided into four wings, Dungar Niwas, Mandir Chowk, Gulab Niwas and Champa Niwas. The hotel has 13 historic suites. Each suite has been meticulously restored to its original grandeur. Every detail, from the furniture to the wallpaper, the four-poster beds and picturesque windows has been carefully preserved.

Situated in the midst of a thick forest, tourists can sight migratory birds like Imperial Sand Goose, Antelopes and Black Bucks along with Nilgais, Chinkaras, Blue Bull and Deer near Gajner Lake. Tourists can also go for boating in the lake.