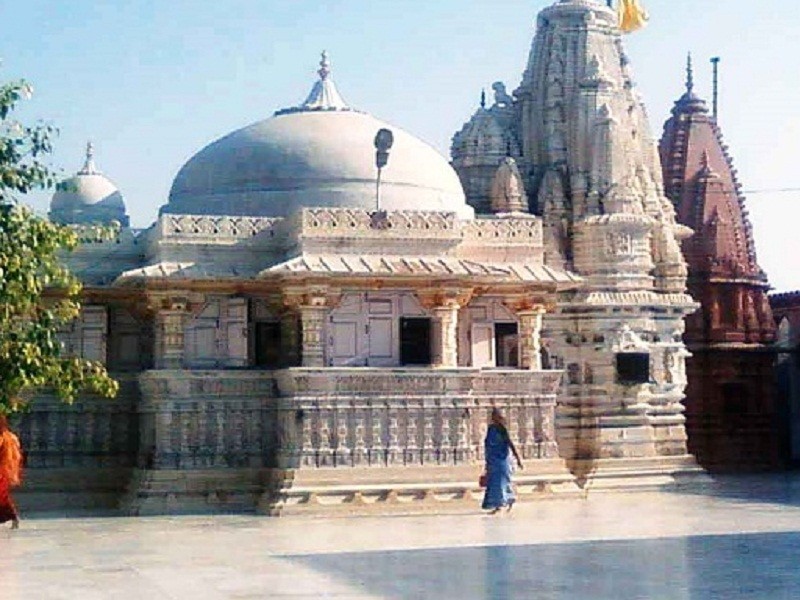 At a distance of 3 km from Bikaner Junction Railway Station, Shri Laxminath Temple is an ancient Hindu temple situated just beside Bhandasar Jain Temple in Bikaner Town of Rajasthan. It is one of the oldest temples in Bikaner and also one of the top places to visit in Bikaner.

Shri Laxminath Temple is dedicated to Lord Vishnu and his consort, Goddess Laxmi. It was constructed by Maharaja Rao Lunakaran, between 1504 and 1526 CE. Later the temple was developed by Maharaja Ganga Singh with more elaborate art work inside the temple and highlighting architectural skills. The temple was constructed as a seat of Laxminathji as the rulers of Bikaner territory regarded Lord Laxminath as the King of Bikaner and themselves as his ministers,

The temple is made of marble and red stone. Particularly for this temple the red stone was imported from Jaisalmer. The silver artwork on the doorway is extremely beautiful and is noteworthy. The throne of Lord Laxminath is situated in the temple which also possesses an idol of Goddess Lakshmi and Lord Vishnu in a State of Embrace. This particular idol measures about one and a half feet in height and is based on a square-shaped stone platform. The shrines of Shri Suryanarayanji, Shri Neelkanth Mahadev, Shri Roopchaturbujji, Shri Badrinarayanji, Shri Magavidyaji, etc. are also present in the temple grounds.

Shri Laxminath Temple of Bikaner is the centre of several religious festivals. The temple is thronged by thousands of devotees during the festivals like Ramnavami, Geeta Jayanti, Diwali, and Nirjala Ekadashi to seek blessings of the revered idols.