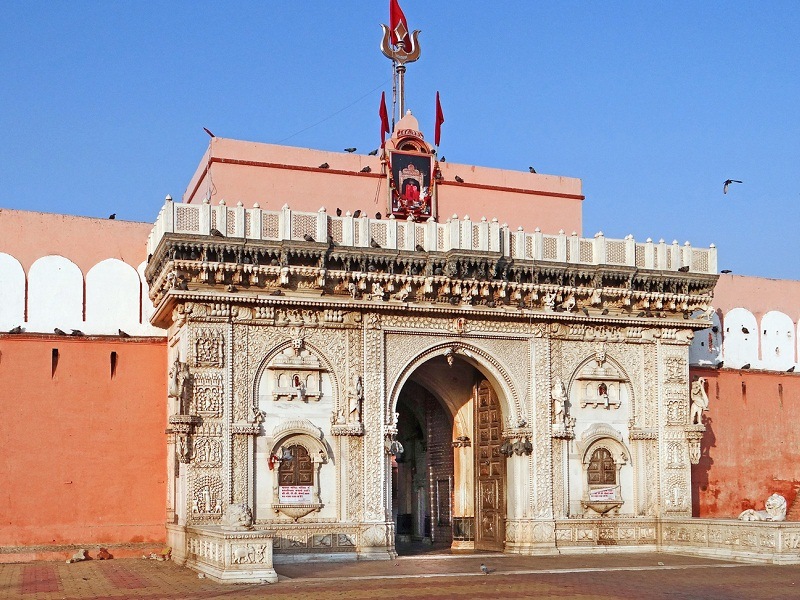 At a distance of 30 km from Bikaner Junction Railway Station, Karni Mata Temple is a Hindu temple situated at Deshnok town in the Bikaner district of Rajasthan. It is one of the top places of pilgrimage in Rajasthan, and also one of the top Bikaner tourist places.

Karni Mata Temple at Deshnok is dedicated to Karni Mata, an incarnation of Goddess Durga. Also known as the Rat Temple, the temple is a renowned center for rat worship and draws many visitors every day as part of Bikaner sightseeing packages. This 600 years old temple is home to thousands of black, grey, and white rats or Kaba. As per folklore, feeding rats at this temple brings good fortune. According to the local belief, the rats would reincarnate as holy men.

The temple is carved from stones and marble, which features silver gates built by Maharaja Ganga Singh and an overhead mesh that protect rats from birds. The silver doors depict the various legends associated with the goddess. An image of Karni Mata is depicted holding a trident in her hand in the sanctum sanctorum. It is believed that Goddess Durga lived at this place during the 14th century and performed miracles. The deity is believed to protect the erstwhile royal family of Bikaner.

There are about 20,000 rats on the temple premises. The rats move freely in the temple and appear from crevices in the marble-covered walls and flooring. The sighting of a white rat is considered very auspicious. If anyone is killed, then an idol of the rat made of solid gold has to be donated as penance for the crime. Many people offer sweets, milk, and other edible offerings to the rats. The food nibbled by rats is also considered holy and consumed as prasad.

The best time to visit the temple is during Karni Mata Fair. The fair is celebrated two times a year at Deshnok in the month of Vaishakha (April to May) and Kartika (October to November). Devotees from all over the state came to Deshnok to worship goddess Durga and her embodiments. Rajputs also come with their children on jadula (first haircut of children), to take the blessing of the goddess for their children.