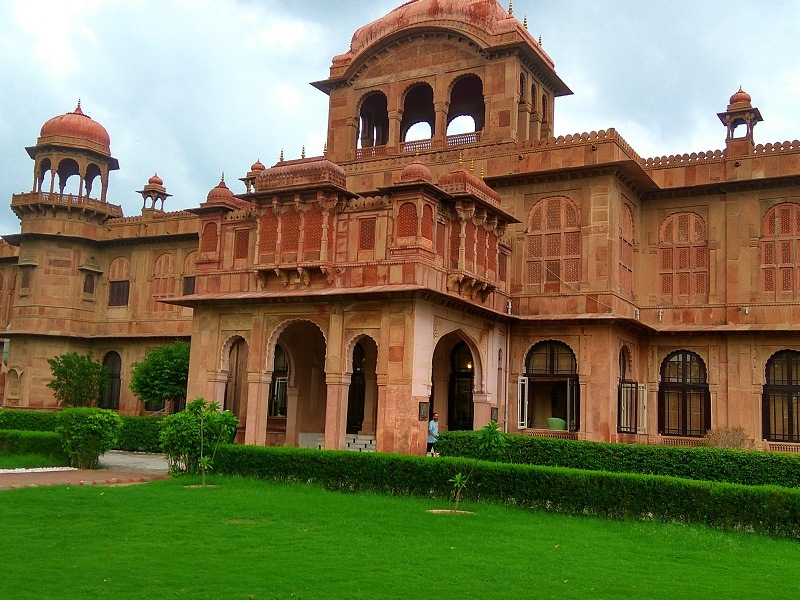 At a distance of 5 km from Bikaner Fort and 4 km from Bikaner Junction Railway Station, Lalgarh Palace is a royal palace situated in Bikaner. It is one of the few palaces commissioned by the British for the Indian kings and also one of the top Bikaner places to visit.

Standing amidst the regal grandeur and conveying the glorious tales of royalty, the Lalgarh Palace in Bikaner is one of the most imposing palaces in the history of Rajasthan. The palace was built for Maharaja Ganga Singh by the British architect Sir Samuel Swinton Jacob between 1902 and 1926 CE.

The Lalgarh Palace is a classic example of Indian, European, and Mughal architecture. The three-storey complex is built with red sandstone extracted from the Thar Desert. The royal family of Bikaner still lives in the palace and has one part for themselves. The palace has a beautiful portico and features many overhanging balconies and latticework. The intricate framework and network are the main attractions of the structure. Apart from this, the gardens with dancing peacocks and bougainvillea are the other attractions at the palace complex.

The complex features magnificent pillars, elaborate fireplaces, Italian colonnades, and intricate latticework and filigree work. The Karni Niwas wing has the darbar hall and an art deco indoor swimming pool. The Lalgarh Palace has now been converted into a heritage hotel. The large and airy rooms point towards a pervasive British influence, even though the Welcome group took over its management in 1993 and made numerous renovations.

Sri Sadul Singh Museum is located in the west wing which also contains the fourth largest private library in the world. Inside the museum, one railway coach (meter gauge) used by Maharaja and their family members is kept at the entrance. The art museum is dedicated to the successive kings of Bikaner, which include Maharaja Ganga Singh, Sadul Singh, and Karni Singh. One can see a vast collection of Georgian paintings, artifacts, photographs, and hunting trophies in the museum as part of Bikaner tour. Moreover, the museum has a separate section dedicated to each king displaying their life and heroic deeds.