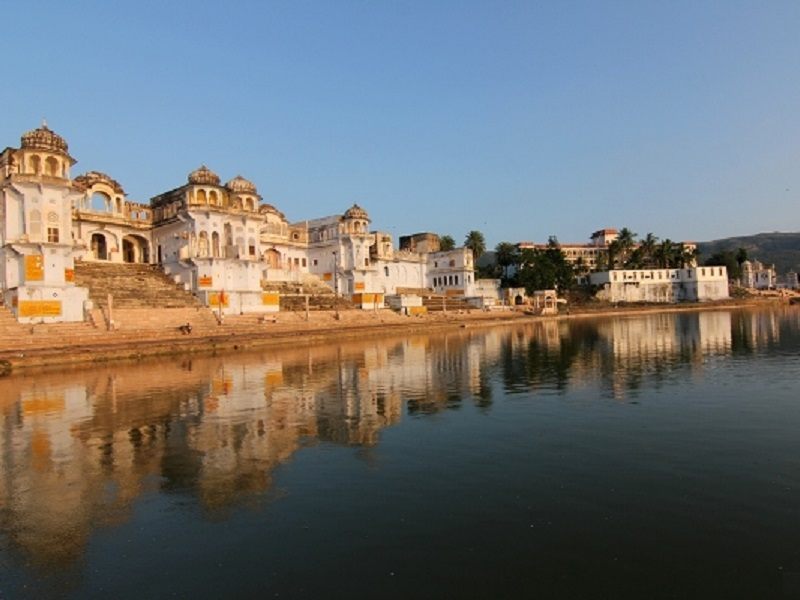 #2 of 8 Places to Visit in Pushkar

At a distance of 1.5 km from Pushkar Bus Station, Pushkar Lake or Pushkar Sarovar is a sacred lake located in the town of Pushkar in the Ajmer district of Rajasthan. Pushkar Lake is one of the most sacred lakes in India and among the most popular Pushkar places to visit.

The history of Pushkar Lake dates back to the 4th Century BC. Though the creation of Pushkar Lake as an artificial lake started in the 12th century when a dam was built over the Luni River. Among the Hindus, it is believed that the lake was created with the lotus flower dropped from the hand of Lord Brahma. Guru Govind Singh is said to have given a sacred speech of the Guru Granth Sahib at the banks of the Lake. The Rajput rulers of Amber, Bundi, Bikaner, and Jaisalmer made great efforts to restore the lake and its surrounding temples. After that many kings of the different dynasties built ghats over the lake.

Pushkar Lake is one of the holiest lakes for Hindus. According to the Hindu scriptures, the sacred lake of Pushkar is described as 'Tirtha Raj' or the king of all pilgrimage sites related to a water body. Pushkar Lake is surrounded by 52 bathing ghats. Of these, Varaha Ghat, Dadhich Ghat, Saptarishi Ghat, Gwalior Ghat, Kota Ghat, Gau Ghat, Yag Ghat, Jaipur Ghat, Karni Ghat, and Gangaur Ghat are most important, which are declared as 'Monuments of National Importance. The sacred lake of Pushkar along with these ghats has been under the protection of the royal families of Rajasthan.

Thousands of devotees visit the lake during the annual Pushkar Fair held in the month of October/November as part of Pushkar holiday packages. It is the most colorful fair celebrated on the banks of Pushkar Lake. Pilgrims throng in large numbers to take a sacred bath during this fair. A dip in the sacred lake is believed to cleanse sins and cure skin diseases.