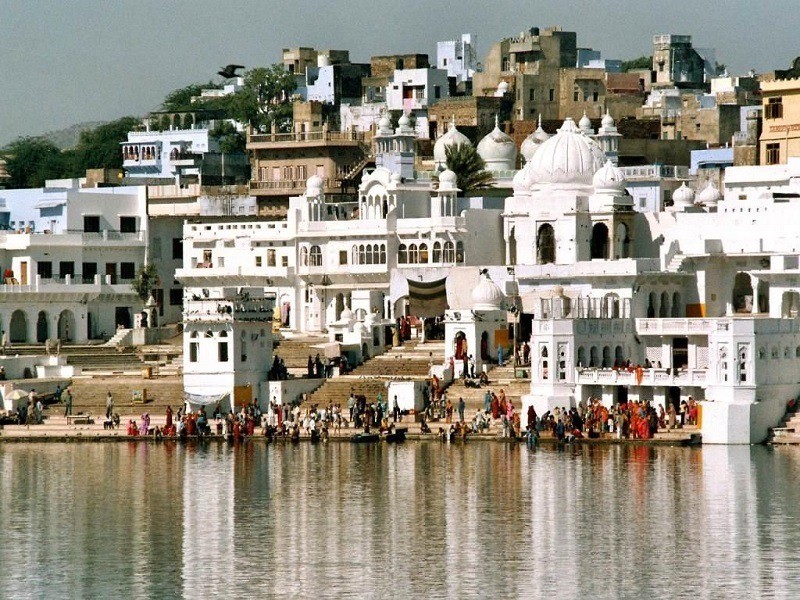 At a distance of 15 km from Ajmer, 145 km from Jaipur, 188 km from Jodhpur, 254 km from Bikaner, 278 km from Udaipur, 375 km from Gurgaon, and 408 km from Delhi, Pushkar is a sacred town located in the Ajmer district of Rajasthan. It is one of the oldest places of pilgrimage in Rajasthan, and among the prime places to visit near Jaipur.

Pushkar is situated at an altitude of 510 m on the banks of Pushkar Lake. The town derives its name from the Sanskrit word 'Pushkar', which means blue lotus flower. According to mythology, Lord Brahma was on his way to search for a suitable place to perform a 'Yagna', a lotus fell from his hand on the earth, and water sprouted from that place. He then decided to name the place after the flower, Pushkar. Pushkar can be visited along with Jaipur packages.

Pushkar is one of the oldest existing cities of India and also one of the five sacred dhams for devout Hindus, the others being Badrinath, Puri, Rameswaram, and Dwarka. According to history, Pushkar was a favorite retreat of the Mughal rulers, which was later taken over by the Scindias after the eventual decline of the Mughal rule. The Scindias handed over the city to the British thus making Pushkar one of the few places in Rajasthan to be under direct British control, until Independence.

There are several temples in Pushkar and the most famous temple is the Brahma temple, which is one of the few temples dedicated to Brahma in the world, and among the must-visit places as part of Pushkar tour packages. Pushkar is also famous for Pushkar Lake, which has 52 Ghats. Hindus consider a journey to Pushkar to be the ultimate pilgrimage that must be undertaken to attain salvation. Varaha Temple, Merta, Aptaeshwar Temple, Pushkar Cattle Fair, Rangji Temple, and Savitri Temple are the popular places to visit in Pushkar. Pushkar is also called 'the rose garden of Rajasthan', because of the extensive flower farming in and around the city.

Sanganer Airport, Jaipur is the nearest airport which is 151 km away from Pushkar. The airport is well connected with flights from Delhi, Mumbai, and Jodhpur. Pushkar Railway Station is the nearest railway station, while Ajmer Junction is the major railhead which is about 15 km from Pushkar. Ajmer is well connected by trains with Delhi, Jaipur, Bangalore, Udaipur, Ahmedabad, Bikaner, Hyderabad, Howrah, Jodhpur, Agra, Dehradun, Chandigarh, Kolkata, Jaisalmer, Mumbai, Amritsar, Haridwar, Pune, and Bhopal. The nearest Bus Station is situated in Pushkar near Bangad School. Pushkar is well connected by bus from Bikaner, Ajmer, New Delhi, and Jaipur.

Pushkar is also famous for its annual Pushkar Camel Fair held in November on the day of holy Kartik Purnima. It is one of the largest camel fairs in the world, in which thousands of camel owners come to Pushkar city to take part in events, sell & purchase activities of their cattle. Competitions such as the Matka phod, longest mustache, and 'bridal competition' are the main draws for this fair which attracts thousands of tourists. An International Hot Air Balloon Festival is also organized during the fair.

The best time to visit Pushkar is from October to March while the peak season is from December to February. Summers are too hot and monsoon & winter offer pleasant weather to enjoy the tourism in Pushkar.

How to Reach Pushkar - Full Details

Top 10 Places to Visit in Pushkar

#1 of 8 Places to Visit in Pushkar

At a distance of 1.5 km from Pushkar Bus Station, Brahma Temple is a Hindu temple situated in the sacred town of Pushkar in Rajasthan. This is one of the few temples dedicated to Lord Brahma in India and among the must-visit places during Pushkar trip.

The temple was dedicated to Lord Brahma, the creator of the universe. According to the Padma Purana, Lord Brahma was in search of a suitable place to perform a Yagna when the lotus was fell from his hand on the Earth. Miraculously a lake sprang up at the place where the Lotus touched the earth and Brahma considering it a good omen decided to perform his Yagna and named the town Pushkar. But when his wife Saraswati failed to join him, he married a local maiden Gayatri and completed the Yagna. On getting to know about this, an enraged Saraswati cursed Brahma that from this day forth he would be worshiped only in the land of Pushkar and nowhere else on Earth.

#2 of 8 Places to Visit in Pushkar

At a distance of 1.5 km from Pushkar Bus Station, Pushkar Lake or Pushkar Sarovar is a sacred lake located in the town of Pushkar in the Ajmer district of Rajasthan. Pushkar Lake is one of the most sacred lakes in India and among the most popular Pushkar places to visit.

The history of Pushkar Lake dates back to the 4th Century BC. Though the creation of Pushkar Lake as an artificial lake started in the 12th century when a dam was built over the Luni River. Among the Hindus, it is believed that the lake was created with the lotus flower dropped from the hand of Lord Brahma. Guru Govind Singh is said to have given a sacred speech of the Guru Granth Sahib at the banks of the Lake. The Rajput rulers of Amber, Bundi, Bikaner, and Jaisalmer made great efforts to restore the lake and its surrounding temples. After that many kings of the different dynasties built ghats over the lake.

#3 of 8 Places to Visit in Pushkar

The Varaha Temple was built by King Anaji Chauhan in the 12th century AD and is dedicated to Varaha, the third incarnation of Lord Vishnu. The temple was destroyed by Mughal Emperor Aurangzeb and was then rebuilt in the 18th century by Raja Sawai Jai Singh II of Jaipur.

According to a legend, Lord Vishnu turned himself into a wild boar and came to earth, to kill the monstrous demon Hirnayaksh, who was going to destroy the whole universe. Varaha slew the demon and retrieved the Earth from the ocean, lifting it on his tusks and restored Bhudevi to her place in the universe. It is one of the most visited temples in Pushkar.

This is a fortified temple in Pushkar and is considered to be the most ancient temple in the city. The temple .....

#4 of 8 Places to Visit in Pushkar

At a distance of 1 km from Pushkar Bus Station, Camel Safari is one of the major attractions in Pushkar. The Great Indian Desert of Rajasthan can be explored on the camel back is the great and exciting things to do in Pushkar.

Camel Safaris are certainly the ideal way to spend time exploring the rustic and royal Rajasthan. It is an adventure, which takes you through the golden sands of the vast Thar Desert providing a glimpse of the desert lifestyle through remote villages. There are many local operators and desert camps that operate Camel Safari in Pushkar. One can have Camel Safari either in the morning or in the evening according to their comfort.

The special cultural performances on the sand dunes, the camps set up for the travelers, the traditional Rajasthani meals, and the picturesque hamlets with friendly folks, all together make Camel Safaris in Pushkar is more popular after Jaisalmer. The .....

#5 of 8 Places to Visit in Pushkar

Rangji Temple is dedicated to Lord Ranga, an incarnation of Lord Vishnu. It is believed that the temple was commissioned in 1823 by Seth Puran Mal Ganeriwal who was from Hyderabad. The temple of Rangji Ji reflects a mix of Mughal and Rajput architecture. The high-rising Gopuram also reflects South Indian architecture, and adds more charm to the whole temple.

This temple contains a principal shrine called the Vaikuntha Venkatesh, and eight other temples dedicated to Goddess Laxmi amongst others deities. Lord Rama, which is one of the incarnations of Lord Vishnu, resides in the sanctum sanctorum of the temple. Lord Krishna, Goddamaji and Sri Ramanujacharya are the other shrines present inside the temple complex. The temple houses an image .....

#6 of 8 Places to Visit in Pushkar

At a distance of 3 km from Pushkar Bus Station, Savitri Temple is Hindu temple located on the top of Ratnagiri Hill behind Brahma Temple in Pushkar. It is one of the popular places of sightseeing in Pushkar.

The temple is dedicated to Goddess Savitri or Saraswati, the first wife of Lord Brahma. The temple was built in 1687 CE on the hilltop and was rebuilt by Bangar family in early 20th century. Both the idols of Savitri and Gayathri are kept here. The idol of Savitri dated back to 7th century AD.

According to the legend, Lord Brahma was performed a Yagna at Pushkar where his wife Saraswati could not reach on time. Hence, in order to perform the pooja in time, Lord Brahma completed the ritual with the help of a local girl, Gayatri- who then became the second wife of Brahma. Savitri became furious at this and cursed him that he will only be worshipped only in Pushkar and went to the hilltop. Also, the aarti is performed first in Savitri Temple and then in Brahma Temple.

#7 of 8 Places to Visit in Pushkar

At a distance of 1 km from Pushkar Bus Station and 600 m from Brahma Temple, Mahadev Temple or Apteshwar Mahadev Temple is a popular Shiva shrine situated on the banks of Pushkar Lake in the holy town of Pushkar, Rajasthan. It is one of the top pilgrimage places in Pushkar.

Apteshwar Temple is dedicated to Lord Mahadev or Lord Shiva and was built in the 19th century. The temple has a statue of Mahadev with five faces that is entirely made of white marble and is adorned with ornaments. The five faces are named Sadyojat, Vamdev, Aghor, Tatpurush and Ishan. The four faces of Shiva represent the four directions. The fifth face which points skywards is the universal face symbolic of purity and spiritual progress. Also five faces represent five elements Prithvi, Varun, Vayu, Agni and Akash.

The temple is popular in and around Pushkar for its beautiful architectural style. The temple is built with white marbles and is a peaceful abode of Shiva. There are numerous sculptures and carvings .....

#8 of 8 Places to Visit in Pushkar

At a distance of 63 km from Pushkar, Merta is a historical town and municipality located in Nagaur district of Rajasthan. Merta is one of the famous heritage sites in Rajasthan and also one of the top tourist places to visit in Pushkar.

Merta was the birth place of Meera Bai, the staunch devotee of Lord Krishna. In olden days, the place was known as Medantak and was the capital of a ruler named Nag Bhatt. Around 1488 AD, it was held by Rao Duda, fourth son of Rao Jodha, and grandfather of fabled saint Princess Mira Bai. Later, during the reign of Rao Veeramdev, Merta was attacked by Rao Maldeo Rathore of Jodhpur and captured it. Maldeo built the fort of Malkot, which is now in ruins. This is also the place where Marathas defeated Jodhpur and Jaipur armies. Later, it came under the rule of Emperor Akbar in 1562 AD. At one time, it was a great trade center and was the headquarters of a district of the same name in the princely state of Jodhpur.

Mira, the celebrated devotee of .....