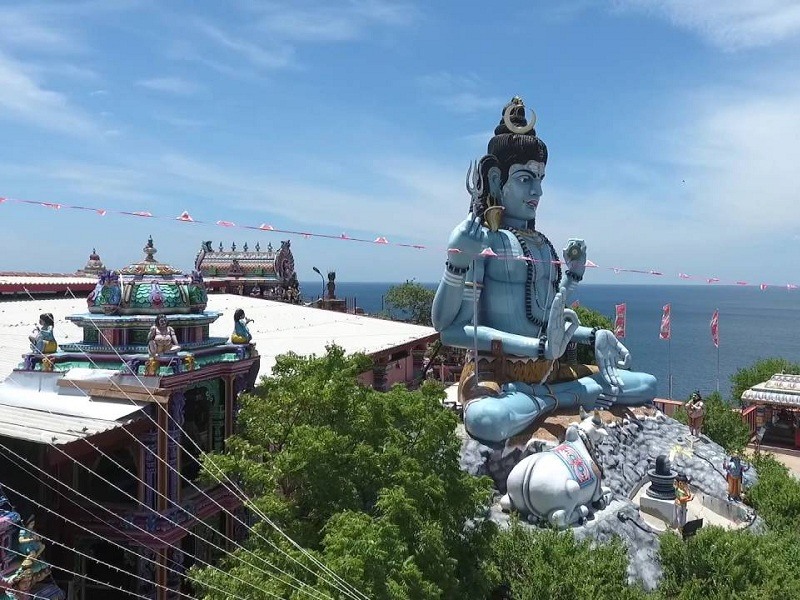 #1 of 13 Places to Visit in Trincomalee

Travel Tips: People be dressed modestly that cover the knee. Avoid visiting during the afternoon because the stretch you have to walk barefoot from parking gets very hot.

At a distance of 3 km from Trincomalee Railway Station, Koneswaram Temple is a Hindu Temple located atop Swami Rock inside Fort Fredrick in Trincomalee town of Sri Lanka. Overlooking the beautiful Gokarna Bay, it is one of the popular places of pilgrimage in Sri Lanka and among the prime places to visit in Trincomalee as part of Sri Lanka Tour Packages.

Koneswaram Temple or Thirukonamalai Temple is dedicated to Lord Shiva. Surrounded by jaw-dropping scenery, the temple is believed to be one of the Panch Ishwarams (five abodes of Shiva) of Sri Lanka along with Ketheeshwaram, Munneshwaram, Naguleshwaram and the now destroyed Tenavaram. The site is a religious pilgrimage for the Hindus and is also known as the Kailasa of the South as it lies on exactly the same longitude as Mount Kailash. Koneswaram gets its name from the chief deity of the temple that is God Shiva.

A 17th century stone inscription in the temple states that the temple began its history in 1580 BC. Though this is unconfirmed, the truth remains that the ancient cave shrine that lies beneath the pinnacle of the mountain points towards a history well predating the Sangam Period. It is also a confirmed fact that Koneswaram was a well established and popular temple during the arrival of the exiled Indian prince Vijayan in the 6th century BC. However, the true rise of the temple occurred in 205 BC when the Chola king Elara Manu Needhi Cholan built it as a vast temple city that was surrounded by many smaller temples. However, the temple complex was highly destructed during the religious attack in the country that took place in the year 1622 and 1624. The restoration process of the temple began after Sri Lanka's independence and was completed by the year 1963, with many of the old pieces being reinstalled.

The original temple was built on the summit of the rocky promontory, with hard black granite which was skillfully carved with classical temple bas relief sculptures by Indian temple architects and sculptors. It is described as the 1000 pillared temple with many small shrines surrounding it but was destroyed by the Portuguese army. Fort Fredrick stands at the place that was once the temple premises. Some of the idols were buried underground by the fleeing priests. Some of these have been recovered and are now part of the temple complex.

Built-in Dravidian architectural style, the present temple is a small temple located right at the far end of the rock from where one can see the ocean all around. The main temple houses a Shivalinga and the Devi temple. There were separate shrines and temples for gods and goddesses like Ganesha, Padrakali, Vishnu/Thirumal, Shakthi, Suryan, Murukan and also King Ravana. A huge Shiva statue welcomes visitors at the entrance. Shankari Devi Temple is located within the premises of Koneswaram Temple. The idol of the goddess is in standing position with four arms. It is believed that the leg of Sati fell here when Shiva was taking her body around. This is the first Shakti Peeth mentioned by Adi Shankaracharya in his Stotra describing the 18 Shakti Peethas in Indian Subcontinent.

The sunrise is just beautiful from the temple ramparts. A little further down the stairs facing the temple from the ocean, a giant golden idol of King Ravana stands in the worship of the Svayambu Lingam in the temple. The statue stands on a metal platform and has hundreds of coins scattered by devotees at its feet.

The main festival of Koneswaram Temple is the Thirukoneswaram Ther Thiruvilah Festival, which is a chariot festival taking place in April and lasted for 22 days. The main focus of the festival is to prepare the deities and community for Puthandu, the Tamil New Year. During the festival, the gods and other artifacts are bathed in the holy water which is later sprinkled upon the devotees. Besides, Navratri and Shivratri are the two festivals celebrated here with much enthusiasm.