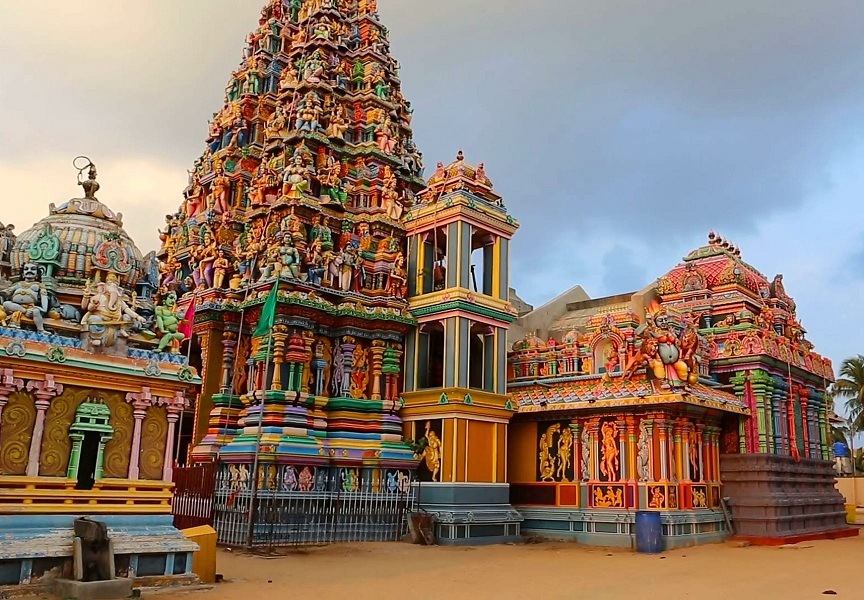 #3 of 13 Places to Visit in Trincomalee

Place Location: At The Center Of Trincomalee Town

Pathirakali Amman Temple is dedicated to goddess Bhadrakali, the benevolent form of goddess Kali Amman. Along with her, there are idols of Mahalakshmi and Mahasaraswati. The Pathirakali Amman Temple is a part of the temple complex of the ancient Trincomalee Koneswaram Temple compounds. The history of the temple dates back to the Chola kings from the 11th Century, and it has been attracting pilgrims ever since. King Rajendra Chola I expanded the shrine significantly during his reign, an inscription he left detailing this is displayed on the premises. The temple is mentioned in the book Birds of Prey (1997) by Wilbur Smith, set in the 1660s.

The temple is built in the classical Dravidian style of architecture which is similar to the temple styles found in South India. The spectacular gopuram of this Kali temple with its vibrant colors and myriad sculptures catches your eye from a distance, while the unique interiors will leave you spellbound. The temple walls are adorned with many beautiful sculptures that are nothing short of excellence. The temple is located just beyond the Konesar Road Esplanade before the entrance to Konamamalai (Swami Rock). Proximal to the ancient Koneswaram Temple, both ancient temples share functions during the Ther Thiruvillah Festival procession and the Back Bay Sea (Theertham Karatkarai).

The temple also holds an annual festival which is called the 'Mahotsavam' which lasts for about ten days and ends along with the Chariot festival of the Koneswaram temple. The feast of the Mahotsavam festival usually begins in the third week of March for 15 days where the devotees come and celebrate the feast. The Mahotsavam ends after ten days with the water cutting ceremony will be held in the Back Bay Sea in the eastern port town.