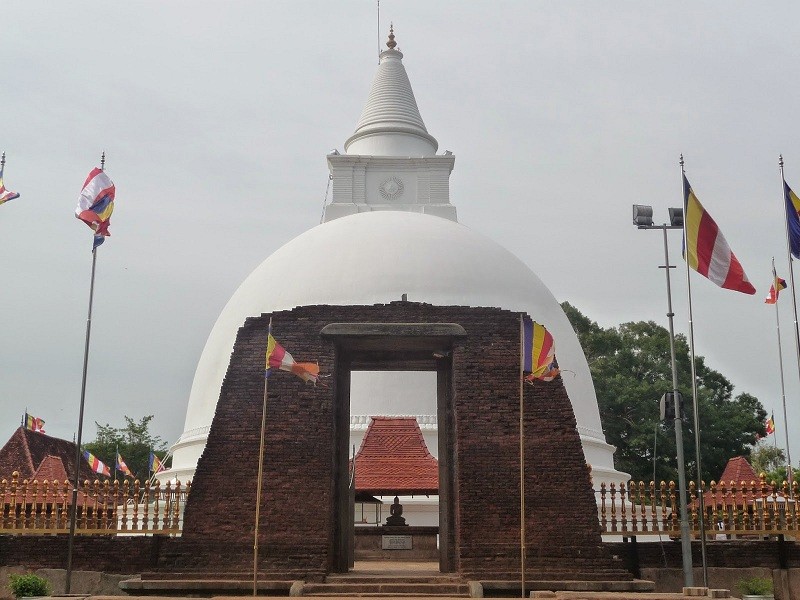 #8 of 13 Places to Visit in Trincomalee

At a distance of 44 km from Trincomalee, Seruwila Mangala Raja Maha Vihara is an ancient Buddhist temple situated at Seruwawila in the Trincomalee district of Sri Lanka. It is counted amongst the holiest Buddhist sites in Sri Lanka and one of the top places to visit near Trincomalee.

Seruwila Mangala Raja Maha Vihara was built during the reign of King Kavantissa (2nd century BC). It is believed that three viharas existed at this particular spot that was built during the periods of three former Buddhas named Kakusandha, Koṇagamana, and Kassapa with their relics enshrined. Gautama Buddha had personally visited this place and offered eight handfuls of 'sapu' flowers, then wished that the temple which constructing in the future should be named as Mangala viharaya. The stupa containing the Lalata Dathun Wahanse (sacred forehead bone) of Lord Buddha and is among the sixteen holiest Buddhist shrines (Solosmasthana) in Sri Lanka.

Over the years, the stupa fell into ruins under the pressure of the Tamil invasions from the north. But there is evidence in the literature that this area was under the purview of the Kandyan territory during the 17th century and the existence of this stupa. It was only in 1922 that the dagoba was re-discovered by Dambagasare Sumedhankara Thero and he restored the stupa with the approval and supervision of the Department of Archaeology using remains of ancient structures around the stupa to conjecture the conservation work. The conservation was completed in 1931.

The site was declared as an Archaeological Reserve in 1962. After this, the Department of Town and Country Planning drew up a plan for the development of a new town complete with pilgrim rests, market areas, etc. during the 1970s in view of the importance of this sacred shrine and to attract more pilgrims to the area. In 2009, it was refurbished and ceremonially opened for the veneration of a large number of devotees at a cost of nearly Rs. 25 million by the National Physical Planning Department.

The stupa and its environs covering approximately 85 acres and has evidence of molded bricks, balustrades, guard stones, moonstones, an Image house, ancient pond, remains of the ancient chapter house, and a Bo tree shrine. In addition, there is a ruined ceremonial gateway with a carved stone door frame at the northern entrance. Thousand of devotees visit this sacred stupa every year to pay homage and seek blessings of the Lord Budhha. Also, visit the new complex with a huge statue of Buddha.