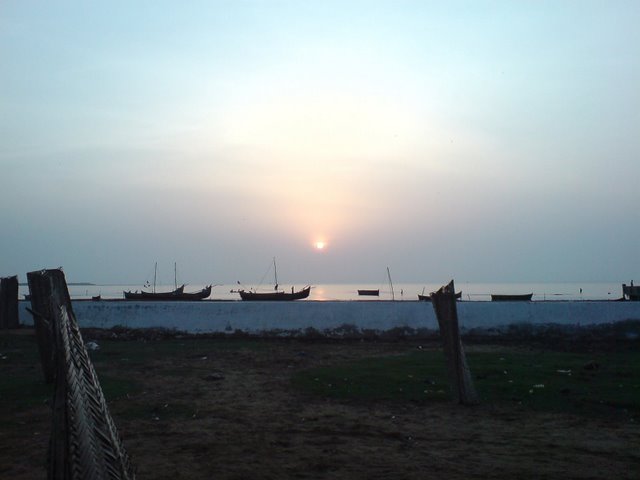 #4 of 12 Places to Visit in Rameshwaram

At a distance of 65 km from Rameshwaram & 15 km from Ramanathapuram, Devipattinam (also known as Navabashanam) is a beautiful coastal village.

This small village has a temple dedicated to Devi. It is said to be the place where Mahishasura was slayed by Goddess Durga Devi. It is said that Sri Ram had prayed to the Nava grahas here by placing nine stones prior to going to war with Ravana. It is increasingly getting popular among devotees who visit the nearby temples of Rameswaram and Thirupullani. The nine stones representing the Nava grahas or nine planets can be seen few metres into the sea. However depending on the water levels one may get to see all or few of them.

There are two other temples here, one dedicated to Thilakesava and the other to Jagannatha. The Thilakeshwar Temple is dedicated to Shiva and Parvathi (Durga). Shiva here is known as Thilakeswarar and the Goddess is known as Soundaryanayaki. Devotees at the temple offer nine varieties of grains to the Gods and Goddesses.The beach is full of multicoloured shells and corals of varied forms.