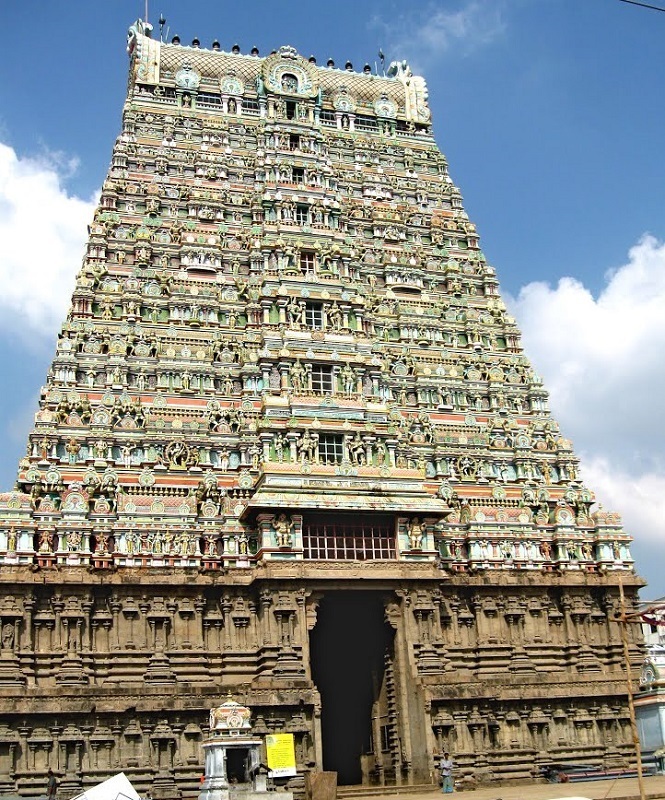 At a distance of 1.5 km from Tenkasi Bus Station, 5 km from Courtallam, and 55 km from Tirunelveli, Sri Kasi Viswanathar Temple is a sacred Hindu shrine located in the town of Tenkasi. It is one of the popular Tenkasi places to visit, and among the significant pilgrimage sites near Madurai.

Sri Kasi Viswanathar Temple is dedicated to Kasi Viswanathar a form of Lord Shiva in a self-incarnated form (swayambu). Tenkasi town derived its name from this temple and known as Kasi of South. It is believed that worshipping the Lord in this temple is equal to worshipping the Lord in Kasi. The nearby river Chittar is considered equivalent to Ganga.

The temple was built by Parakrama Pandyan in Dravidian style. The construction of Rajagopuram was completed in the year 1505. The gopura caught fire in 1824 and was in a bad condition till 1966. Then the renovation began and was completed in the year 1990. The Rajagopuram is 180 feet tall and is the second largest in Tamil Nadu. A pathway is also provided up to tower in the 9th tier to have an aerial look of Tenkasi. This temple is also known as Ulagamman Temple, and is one of the must-visit places during Tenkasi tour.

This temple has three shrines - Siva, Amman, and Murugan. The consort of Kasi Viswanathar is known as Ullagamman in this temple. This temple boasts beautiful sculptures and also has musical stone pillars that produce different sounds when tapped with fingers. There are twin statues of Veerabhadra, Nataraja, Rathi-Manmatha, idols of Thirumal and Kali Devi are wonderfully carved.

The 10 day Masi Magam in February/March, Navarathri in September/October, Tirukalyanam in October/November, boat festival in August/September are the festivals grandly celebrated in the temple.