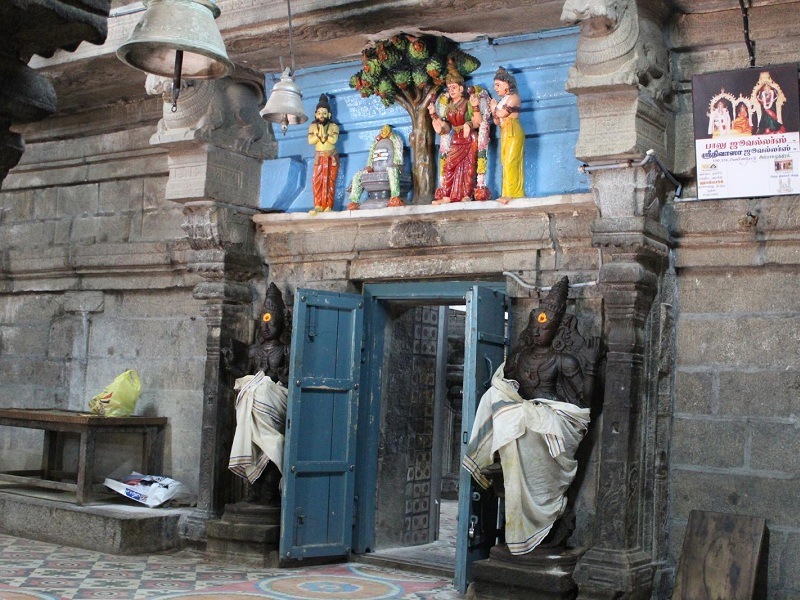 #11 of 23 Places to Visit in Tirunelveli

At a distance of 12 km from Papanasam and 47 km from Tirunelveli, Sri Sivasailanathar Paramakalyani Temple is a 500 year old Saivaite temple situated on the banks of River Gadana at Sivasailam in Tamilnadu. Popularly called as Sivasailam Temple, this is one of the famous Shiva temples near Tirunelveli.

The Sivasailam Temple is dedicated to Lord Sivasailanathar and Goddess Parvati. Built by Pandiyas, the temple is surrounded by Velli malai, Mulli malai and Podhigai hills. It is believed that the Shiva Lingam in the sanctum is swayambhu lingam. At the back of the statue, there are lines that appear like hair, so he is also called Sadaiappar. This can be seen through a hole while strolling around the sanctum sanctorum. This is visible only when the Archakar gives Aarathi at the back of the lingam.

The temple is huge with many mandapams and carved pillars. The principle gopuram has five stories and is embellished with numerous statues. The specialty of the temple is the huge statue of Nandi. Legend says that the Nandi was sculpted so beautifully that if came to life and started to lift off. Hence, the sculptor had to stroke it on its back so that it remained seated. The mark of the stroke can be seen today. Besides Lord Shiva, Vinayakar, Murugan, 63 Nyanmars, Dakshina Moorthy, and Natarjar are the other deities in this temple. There is a separate shrine for Goddess Paramakalyani which is situated next to the main sanctum.

Poosam Theppotsavam in month of Thai and Rathotsavam in April are the prominent festivals celebrated at this temple every year.